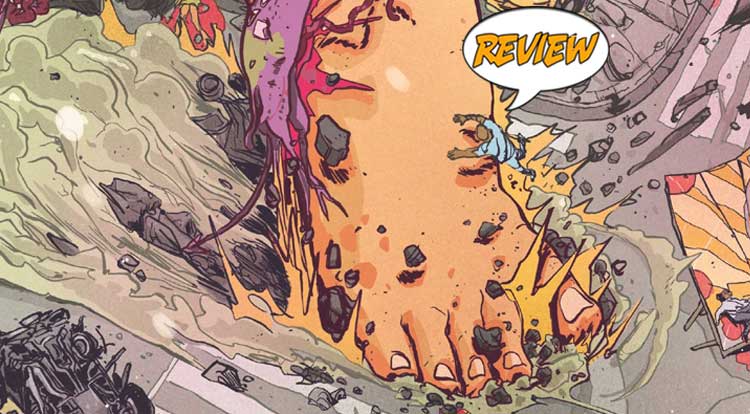 Jenny’s secret is out, and also, she’s forty feet tall and naked.  That’ll make for an unusual day.  Your Major Spoilers review of Jenny Zero #2 from Dark Horse Comics awaits!

Previously in Jenny Zero:  Jenny’s BIG secret revealed . . . and no one is more shocked than HER!  With the discovery that she’s more like her father, Mega Commander Zero, than she thought, Jenny must now fight off a legion of monsters, save a city from destruction-and find enough alcohol to forget the entire ordeal!

THEY TOLD HER TO PUT THE JUMPSUIT ON

Jenny Zero #2 opens with a flashback to the day that Jenny’s father, Mega Commander Zero, sacrificed himself to save the world from the biggest monster (“jagokai”) ever encountered.  Smash cut to the present, as Jenny Tetsuo finds herself several stories high, and realizes that she takes after her dad more than she thought.  She fights off the creature that wants to destroy the city while remembering the day her father died, including rejecting his pet dog, Frank Sinatra, and meeting her present-day best friend.  Jenny takes out the creature despite being buck naked, then confronts her would-be handler, who admits to triggering her powers.  Jenny walks out on him and the forces of A.S.P., holing up in a hotel with best friend Dana before setting off on a mission all her own… which is apparently exactly what A.S.P. wanted her to do!

Jenny’s first words in this issue involve multiple f-bombs (which reminds me, this is definitely not for the young or the squeamish, as there’s body horror and a topless giant woman in play for much of the first half of the book) and her battle with the jagokai is hilarious and violent all at once.  I especially like how she takes the time to threaten that she better not see her picture on TMZ before crashing into the monster.  Jenny’s attitude is the heart of the issue, as she responds to being told that her father would want her to follow in his footsteps with the armor-piercing question: “Do you honestly think I would give a #$&@ what he would have wanted?”  As we find out more about her life, it’s easy to tell how she grew to be the cynical woman that she is, and King’s art is up to the task.  When she realizes that she has a giant-goldfish-kaiju blaster, the look on her face is amazing, and all the monster designs are creative and sort of impossible, and it totally works.

In short, jenny Zero #2 is a really interesting twist on the Ultraman-style-giant-hero-fights-alien-menaces routine with a young, brash, obnoxious protagonist who doesn’t want anything to do with her father’s legacy, making for excellent drama, exciting action sequences and a fun comic book, earning 4 out of 5 stars overall.  Special kudos go to DAM, whomever she/they are, for creating a wild pastel-ish color palette full of bright greens and violets that make the world more engaging, as well as undermining the reds and blues one usually associates with giant monster-hunters.  This is a good’n.

Jenny herself is funny, cynical, angry and disaffected, and her battles with giant monsters are equally entertaining and off-kilter, with killer art and a truly inspired color palette. Worth the price of admission.