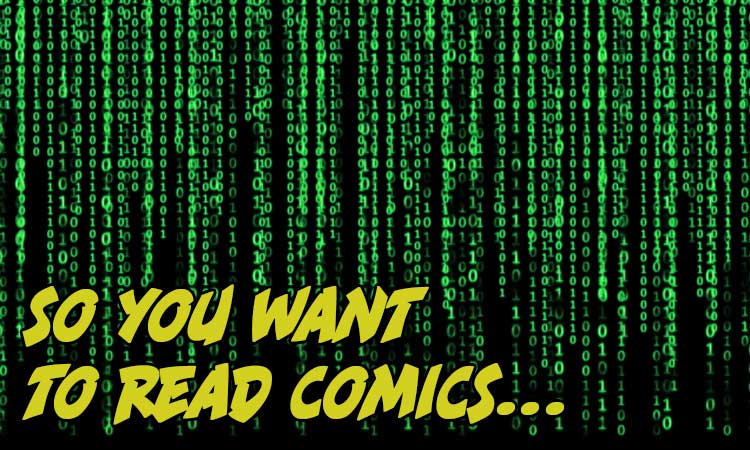 So You Want To Read Comics: The Matrix Edition

Don’t take pills from strangers, but do check out “So You Want To Read Comics”, a weekly feature where we take a look at a topic, then offer a pair of comic book recommendations for new readers, based on that topic.  This week, we’re taking a look at the sci-fi classic, The Matrix.

Created by The Wachowskis and released in 1999, The Matrix quickly became a cultural phenomenon.  Audiences were hypnotized by this stylish and visually groundbreaking sci-fi action film that told the story of the messianic Neo and his struggle to lead the last of humanity in a war against the machines that have taken over.  Beyond just its visuals though, The Matrix was a movie that wasn’t afraid to be lofty in its messaging.  It didn’t shy away from deep philosophical questions about the difference between reality and simulation while pairing this with uncomfortable trains of thought regarding free will and how humans are “coded”. It pulled from a multitude of influences both thematically and visually.  Both western and eastern theology shows up, themes of past cyberpunk fiction are present, and even classic cinema has a place here.

There have been no shortage of films, T.V. shows, books, and comics that have tried to imitate the feel of The Matrix, so this week we’re going to take a slightly different approach and show the comic books that actually influenced The Matrix.

Everyone’s favorite Scottish, bald, magician is back again.  This time with one of his most well-known series, The Invisibles.  This comic series focuses on a group of freedom fighters struggling against hidden forces within our universe who have been trying to stifle progress and establish authoritarian rule. Where this series differs from many others that have similar setups is how reliant it is on philosophy, new age mysticism, Morrison’s own beliefs about the universe, and the metaphysical.  If you’ve been paying attention you might already recognize some of these themes as being in The Matrix.  This isn’t an accident.  Leading up to the creation of The Matrix, The Wachowski’s actually contacted Morrison and asked him to write a story for their website. Later on it was rumored that copies of The Invisibles was passed around the set of The Matrix as inspiration for the crew.  In fact, while reading The Invisibles, don’t be surprised to see some aspects from it copied beat for beat in The Matrix.  Don’t get angry though, Grant Morrison has claimed that he is fine with this and thinks it helps with the purpose he created The Invisibles for in the first place.

Hard Boiled tells the story of Carl, an insurance investigator who begins to have nightmares that make him question his real identity, his job, and just about everything else he considers real or “his”.  Things then spiral into a cyberpunk soaked saga involving androids, mega corporations, revolution, and copious amounts of violence. All of this is well and good, the important thing though is that when this series came out back in 1992, The Wachowskis read it.  This look at a dystopia stuck with them, so much so that when it came time to create the design and look of their world in The Matrix, they actually called on the artist of Hard Boiled, Geof Darrow, to do the concept art.  Reading Hard Boiled will reveal how similar these two properties are visually, with some elements crossing over almost whole cloth.  These three creators would continue to work together on The Matrix comic series that would go on to inspire the Animatrix.  Basically, without this comic book series, The Matrix would probably still exist, but there’s a chance that it would look radically different.