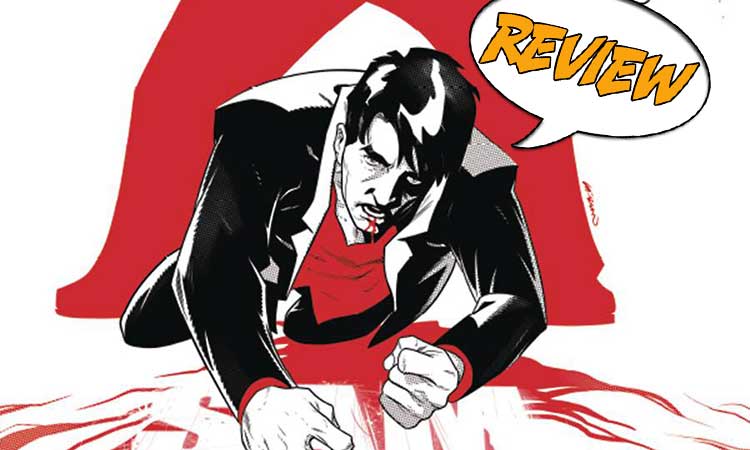 Sam and His Talking Gun #3

In Sam and His Talking Gun #3, we find out more about the relationship between Sam and Colt, and then, Sam announces his intentions to gain revenge for Colt’s murder of his beloved Grandpa.  Who dies?  Find out in your next mighty Major Spoilers review! SAM AND HIS TALKING GUN #3

PREVIOUSLY:  Sam’s Grandpa took in a young kid named Colt to protect him from an abusive father.  Then, Colt killed Grandpa, and Sam went into an asylum for 12 years.  Only now, Sam is out, with his talking gun, and nothing, absolutely nothing, will stop him getting revenge for the death of his beloved Grandpa.

Sam and His Talking Gun #3 is an interesting comic.  It’s either a comic about mental illness (Sam is armed with a talking gun, hence the title, but is it the gun talking, or a damaged part of his psyche?) in which case, there’s not actually much talked about in the way of mental illness, or, it’s a delightful bit of genre nonsense ladled on top of your standard assassin versus assassin storyline.  Maybe the gun really is talking, which means the series is trending towards the occult.

Either way, Sam and His Talking Gun #3 doesn’t really strive to be any different from any other series about assassins fighting assassins, or a ‘good’ assassin seeking vengeance for a loved one.  It traffics in the sort of violent gore that has become increasingly common in comics (well, outside the Big Two, anyway), so there’s that for gore hounds.  It doesn’t, though, strive to be anything more than what it is, which is a little disappointing.

So, we learn that Sam has spent 12 years in an asylum (you would too if you thought your gun was talking to you) after the murder of his beloved Grandpa (and when I mean beloved, I suppose the fellow who sets up a company of hired killers is more feared, but anyway) by a young fellow named Colt.  By virtue of an extended flashback, we see Sam and Colt working together on a job in Japan.  They’re good friends, crack wise on the job, and are fiendishly ruthless against the assembled Yakuza horde.  There’s very little inkling that Colt will betray Sam and his Grandpa, but Colt’s love of violence and the power it brings is a sure sign that he’s not necessarily playing with a full deck.

DAY OF THE JACKAL

The writing in this issue is decent enough, though labored at certain points.  There’s an extended sequence with a gun dealer that seems to go nowhere, other than perhaps to lay out some of the history of Sam and Colt.  A snappier scene would’ve been better for the issue overall.

I will say the artwork, by Lee Ferguson, is very good.  Backgrounds, though, tend to be blank, which is a little disconcerting.  That approach does tend to make foreground images more powerful, such as when Sam is preparing to make a broadcast to the members of his Grandpa’s company – the intensity of his emotions in that moment deserve to be the focus of the reader’s attention.  Elsewhere, though, it tends to make the issue feel a little sterile.

Don’t get me wrong, Sam and His Talking Gun #3 is a perfectly fine issue.  I suppose it aspires to be something more, especially with the wrinkle of a talking gun.  But even then, not much is made about the fact that Sam has extended chats with a hunk of lethal metal.  I think, though, that writer Drew Ferguson is perfectly content to leave the possibility that Sam has gone insane, or in possession of a possessed gun, up in the air, while focussing on the main aim of the series, which is vengeance.

There’s action aplenty in this issue of Sam and His Talking Gun #3, and for fans of fight scenes, a well crafted and choreographed attack on a Yakuza compound is the highlight of this issue.  There are attempts to foreground the psychological issues Sam is facing, but they don’t add up to much in the end.

Sam and His Talking Gun #3

Comics about assassins these days are a dime a dozen, whether they’re inside the tent, or outside, there’s heaps of them to choose from. So it makes sense that the creators here have tried extending the boundaries of what can be included, by the addition of a talking gun for our assassin ‘hero’. Whether that is enough to draw more attention in terms of readers, though, will depend on whether they find the idea credible enough.