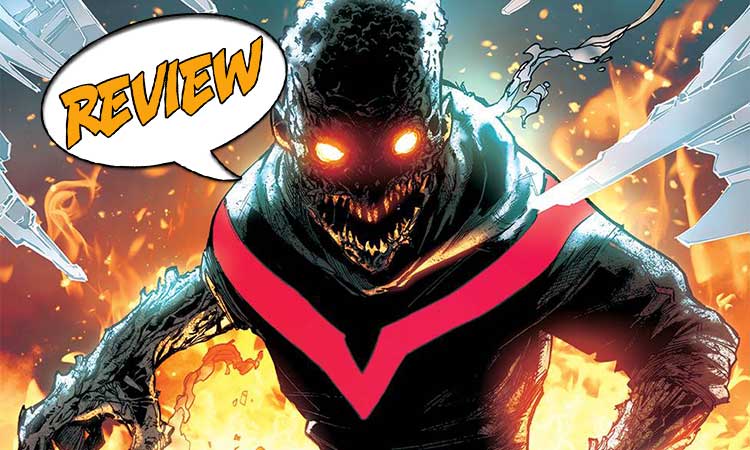 Val is running out of options. With dying batteries and just enough fuel to get to sanctuary, is there any hope at the end of her road? Find out in Nocterra #4 from Image Comics!

Previously in Nocterra: We continue to learn more about the start of the Big PM and how Val and Emory’s parents became Shades. But we cannot dwell on that because Blacktop Bill is chasing Val and his gang hits her truck with harpoons that leach power from its battery. Dr. McCray realizes Bill is after him, gives a book to his granddaughter (Bailey), and gives himself up to Bill. Val gets away, but the captured Dr. McCray offers a book to Bill, claiming Bailey got a fake journal. Bill, being downright evil, decides he wants McCray to become a Shade and kill the girl himself. At another stop, Emory confesses he was going outside because he thought he had made a solar simulator and was testing it. Bailey confesses that she is not McCray’s granddaughter; she just ran into him and wanted to believe that he could bring back the sun.

THE DESPERATION OF HOPE

Nocterra #4 opens near the start of the Big PM. People figured out early on that lights would help them survive. Evacuations were organized. Val and Emory set up all the lights they can find, but no rescuers arrive. Again, Emory’s hope is pitted against Val’s cynicism. She wants to flee early on; he hopes their parents can be saved.

That takes us to the present of the book. Val is frankly in a corner and running out of time. She has gambled everything on the hope that a solar lamp exists. They arrive at the outpost of Tipton and make their way inside. It appears to have been devastated and there are some scavenger Shades. Val quickly makes her way to her contact’s office and does find a solar lamp. They go back to Val’s rig, and Emory attacks! But Val is ready with a light and talks him down, urging him to hold on just a little longer. Worse yet, the batteries continue to drain. She has just barely enough power to get them to the sanctuary, but no more. It’s all or nothing.

Meanwhile, Bellwether the dispatcher puts out a call to a ferryman known as Mother Hubbard. She wants to find out more about Blacktop Bill. This is a story too dangerous to tell on open channels, but he owes her a favor and agrees to tell her what he knows. In a quick cut, we see Bill speeding through the night and talking to his boss who wants the book and wants Bill to kill everyone on Val’s rig.

The truck’s battery dies a few hundred meters short of their destination. Val and Bailey must walk. They are attacked by several animal Shades. Val holds them off and when they retreat, the optimistic Bailey takes heart. But Val knows better. Animal Shades flee from human Shades, which will also be much more dangerous to them. But there is a rumbling noise, a hatch opens up, and a man introducing himself as Tiberius, Augustus’ brother, leads them into a cavern complex.

The art of Nocterra #4 continues to find new ways to play with light among the shadows to create evocative panels. In the opening scene, Val and Emory’s house with all the random lights around it looks like a beacon in the darkness. With a longer shot, though, we see that their house is the only one in the neighborhood with lights around it. This sets up the allegorical conflict between hope and cynicism starkly. That conflict is a running theme in the book, and I enjoyed seeing it communicated in multiple ways.

I also like the dramatic use of all black panels. They don’t just serve to represent the Big PM, but it feels appropriate that some cuts in the action go to black. And then we often see Val’s thoughts. We have seen her grow up. We have seen how she is hard, practical, skeptical. But the most hardened cynic can fall prey to wishful thinking when things are desperate enough. Even so, she is prepared to fight herself the entire time. She hides her hope deep and covers it up with practicality just to survive a little longer, just to buy Emory a little more time.

BOTTOM LINE: WHO ISN’T AFRAID OF THE DARK?

Nocterra #4 is a tensely fascinating read. The complex characters, each in their own way, are on a road with harder and harder choices along the way. The artwork is stunning, and the story resonates especially during this time of pandemic.

Val’s options narrow as she closes in on the supposed sanctuary.