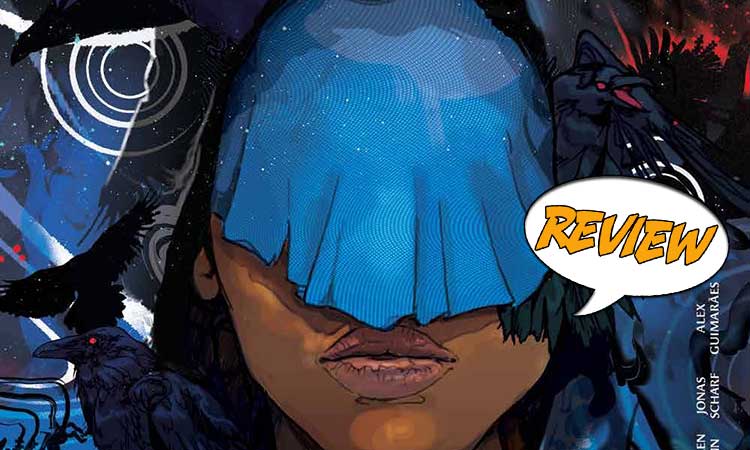 In Basilisk #1, five people come down from the mountain, and a town dies.  Two years later, Hannah, seeking vengeance, kidnaps one of the killers.  Does the vengeance she seeks come about?  Find out in your next mighty Major Spoilers review! PREVIOUSLY:  Five green-clad strangers come down off a mountain, enter a town, and start killing every living soul.  Two years later, Hannah, who lost everyone she loved in the attack, has hardened herself into a survivalist and hunter, seeking the people who destroyed her life.

LOOK INTO MY EYE

Cullen Bunn is a writing machine, someone who probably dashes off scripts in his sleep, or while queuing to pay for groceries.  It seems he can not write, such is his prolific output.  You would think that after time, his inventiveness would wane, that he would begin repeating himself, that the creative spark would begin to fade.

Basilisk #1 disproves that nicely.  Sure, it is an opener, so there is a heck of a lot of set up, but where some might get bogged down in building a backstory, Bunn has sharpened his storytelling to a very fine edge.  There’s an economy of plot in Basilisk #1, but what the reader gets is an accomplished opening issue that promises lots more entertaining violence and strange, occult activity.

You don’t need to know that Hannah is a survivor, perhaps, the sole survivor of the attack that opens the issue.   The way Bun  and artist Jonas Scharf depict that attack  is exceptionally solid.  Misty mountains, a set of bare feet, then a shot of a town in the distance.  People going about their daily lives, then five green clad (have they escaped from a facility?  We don’t know, but the clothing possibly speaks to government experiments gone awry) enter.  A man foolishly asks if they need help, and then the chaos ensues .  All this in just seven panels, filled with moody art and wonderful use of shading to deepen the sense of dread.  And no words, at all, until the attack starts.

Indeed, there’s a dreamy quality to the artwork in this opening section that indicates the acid nightmare of events.  Tight closeups of confusion in the five who descend the mountain give the impression they are newborns, unsure of who and what they are.  Tight focus on their faces washes away the real world, giving them the sense of inhabiting a dreamscape.  It’s only after the killing, when the focus switches to Hannah, does the artwork and sense of place sharpen.

Hannah has clearly been scarred by what happened to those she loved and her town.  The extracts from the journal she keeps, the narration that follows her as she suits up to hunt down one of the five, all indicate a woman whose life has been torn from its path and placed onto a new, more violent one.  It’s the entry of veil wearing Regan that kickstarts the story to a higher level.  Hannah has hunted well, and Regan is her prey.  Finally running her to ground, it is clear that Hannah is right on the edge of killing her; the tears squeezing from her eyes is evidence enough.

It is clear, however, that Bunn has a different intention for his two leading characters.  As is increasingly the norm, and rightfully so, the female leads in Basilisk #1 are tough, but damaged.  They’re no super women (though Regan clearly has some sort of strange power) who are struggling to find their way in a broken world.  Hannah thinks she’s in charge of the situation, but as the slow build up of crows around her motel room indicates, something wicked this way comes.

All the building blocks to a fascinating story are on display in Basilisk #1.  Mystery opener, damaged hero, anti-hero protagonist who unexpectedly sides with the hero, a group of evil killers intent on hunting the traitor in their midst.  It’s all there.  Not much happens, and yet, quite a lot does.

Bunn has got a little one man storytelling cottage industry down pat at the moment. Lean hard into the occult, fill out the character ranks with damaged individuals in search of an answer and or vengeance, add water, and off you go. Put like that, it may sound like he's a soulless writing machine. Quite the contrary; he is a skilled writer who knows his craft very, very well. There’s never a wasted word, or scene, with everything coming together to drive the story irresistibly forward.