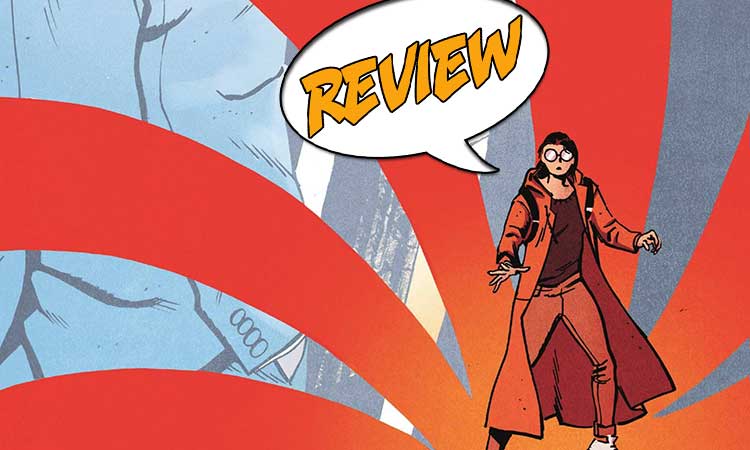 Joe’s investigation takes her to Patricia Pendermills herself. Will Joe finally find the answer she has been looking for? Find out in Dead Dog’s Bite #4 from Dark Horse Comics! Previously in Dead Dog’s Bite: Joe’s trailer burns down and she has nothing left but her investigation into the young people who have gone missing over the years. She searches the newspaper archives in the library, but they don’t go back far enough. She gets a lead that takes her to the home of the previous editor, Fred Quil. Joe tries to be subtle, but Quil figures out she is looking into the disappearances. She isn’t the first; she won’t be the last. He tells her that Cormac is…gone. Not willing to believe him, she runs away, out into the storm, and has a seizure.

TAKING IT TO THE TOP

If there is a theme in Dead Dog’s Bite #4, it is that nothing is quite what it seems, which wouldn’t be a bad metaphor for life, to be honest. It opens with Joe and Mac sharing a kiss before Mac leaves, talking about birthday plans. Presumably this is the last time Joe saw her. The narrator makes an appearance with references to The Wizard of Oz and Alice in Wonderland, both of which are fitting considering the main story.

Joe comes to and finds herself in Allen’s car. He found her in the snow. They tentatively make up over the awkwardness of issue #1 and Joe bluntly asks him why he signed the ledger in black, while Mac signed in red. He jokes that it was the only pen they had. Then she asks how he found her. What was he doing driving around where she happened to have gone on a whim? Then she sees the hoodie in the back seat and jumps out of the car.

She walks through the snow to a large Victorian house and goes in. It is dark and the furnishings are under sheets. A distant glow from behind a partially open door catches her eye. It is a room with photographs of young people on the wall, and a sort of alter covered with lit candles, a gun, and a couple photographs, one of which appears to be Mac.

Up in the attic there are more candles. Patricia Pendermills removes her mask and Joe approaches her with the gun in hand, demanding to know where Mac and the others are. Patricia makes no response other than a hand gesture.  She does not speak at all, and she may be deaf. Then the police chief arrives and insists that Joe put down her gun. There is a brief standoff while the Chief urges Joe to trust her. While she is distracted, the deputy hits her on the head.

Joe wakes up this time in a dark room, sitting at a desk as a film starts running. It is narrated by the narrator of the power blue suit who is Paul Skeetz, Patricia’s brother-in-law, and the audience he talks to is the young person who has just turned eighteen. He gives a history of the town, founded by Patricia as a sort of socialist utopia where everyone was able to survive, to live doing what they wanted to do, and no one wanted for anything. This wasn’t enough for her husband who basically set about trying to also improve the people by his standards of improvement. His story takes an even darker turn which I won’t spoil here.

Pendermills now is a utopia seeking to rebuild itself and stay hidden from the rest of the world. To understand where they want to go, people need to know where they came from. And everyone gets a choice.

I am not sure what I was expecting, but this was a turn I was not anticipating. In this town of otherwise cheerful eccentrics, this is an elegant and thoughtful way to make sense of all the strangeness.

I like the art of Dead Dog’s Bite #4 for several reasons. I like the contrast provided by the strong inking, especially in scenes that are dark. The characters are expressive, even down to subtle displays of emotion. The use of candlelight in some scenes is not just atmospheric; it is used to focus our attention on the characters’ faces.

But what I really continue to like is the panel work. Even when nine-panel pages are used, the art flows among them. Combine that with the art, and the structure takes on a dynamic of its own. Joe’s opening memory rapidly becomes a dream sequence. The last three panels of the first page show her going through a doorway, but, as in a dream, the shape of the doorway changes. This leads into the next page where Joe wanders through an Escher-inspired setting as the narrator talks about Oz and Wonderland. It details like this that all come together to show us Joe’s mental state, as well as guiding us through the pages.

Dead Dog’s Bite #4 takes a story with a lot of strange components and eccentric people and ties everything together in a tidy, yet unexpected, fashion. The art supports the atmosphere brilliantly to give us a delightful blend of drama and surrealism. All in all, it is a thoroughly enjoyable and thoughtful book.

Joe closes in on the mystery, only to find an utterly unexpected answer.