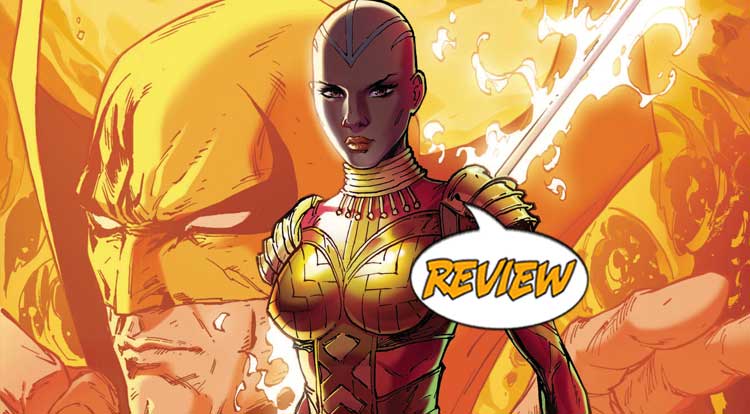 Iron Fist and Okoye have lost their chi, and now they have to face the Ghost Dragon.  This could be bad.  Your Major Spoilers review of Iron Fist: Heart of the Dragon #6 from Marvel Comics awaits!

Previously in Iron Fist: Heart of the Dragon: The end of Heaven?

The dragons have fallen.  A champion rises.

An ending…and a new beginning?

As we open, the Immortal Weapons, Luke Cage and Okoye are facing the Ghost Dragon, trying without success to penetrate it’s scales.  Okoye almost makes it through, but their combined power just isn’t enough.  That’s when they realize that there’s still one dragon left: The cute little baby called Gork.  Iron Fist convinces Gork and his friend Mei to sacrifice his chi to power their final strike, but in defeating the Ghost Dragon, they’re left to face the Heirophant.  With all the Dragon Chi at her disposal, Okoye is almost powerful enough to take him on…  and then Danny gives her the power of the Iron Fist.  The daughter of Wakanda faces him down, and the assembled warriors see the battle end in a massive explosion of power.

As the issue ends, Daniel Rand has given up the power of the Iron Fist, which has been imbued in an egg that carries the essence of Gork the Dragon, awaiting his rebirth, but…  I’m not sure why we spent six issues getting rid of the title character’s powers, but I have to admit, I enjoy Hama’s character interactions greatly.  Luke Cage is especially fun, getting in a “Christmas” after being bitten by a dragon, and Hieorphant’s co-conspirator (whose name is, hilariously, Brenda) has a moment of screaming, crazy villain monologue that is wonderful, especially as it ends, with the Immortal Weapons in silence… until Dog Brother #1 offers to cute off her head.  Wachter’s art is interesting, providing a rough-edged take on kung-fu battles that helps to emphasize the alien nature of the setting and the dragons involved.  When Okoye gets a dragon tattoo across her face, that mirrors Danny’s chest markings, I actually smiled, as it’s a great detail that might have been left out by another artist.

BOTTOM LINE: WHAT A STRANGE ENDING!

In short, Iron Fist: Heart of the Dragon #6 is a bit of a puzzle, featuring strong art but a plot that confuses me, assembling a fun cast that has entertaining interactions but ending everything with a moment that I just don’t understand, earning 3.5 out of 5 stars overall.  The power of the art overcomes at least some of the issues I had with the story, but I am wondering what comes next for the artist formerly known as Iron Fist.

Though this is presented as an Iron Fist story, it's an ensemble cast focused on Okoye of the Dora Milaje, ending with Danny Rand losing his powers. Hama's character work is wonderful, but the plotting perplexes me.