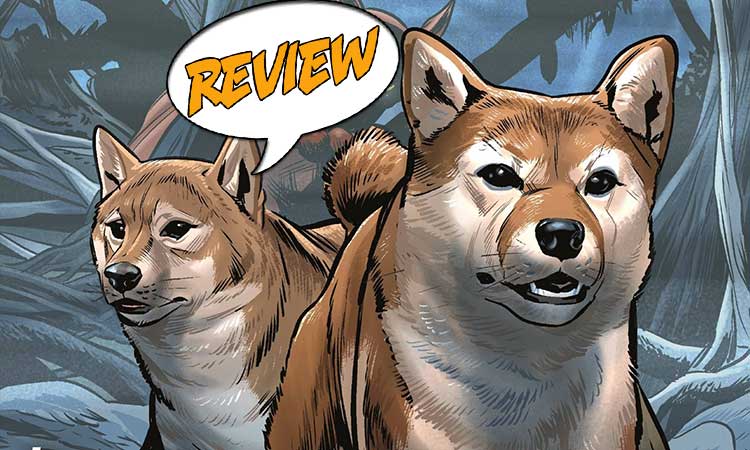 Deep in the mountains, Emrys and Mullins meet two Shiba Inu Guardians. They learn a little more about the creatures they have seen, but will the local Yokai help them? Find out in Beasts of Burden: Occupied Territory #3 from Dark Horse Comics!

Previously in Beasts of Burden: Occupied Territory: Emrys and Mullins follow a scent that leads them to a small shrine where three people collapse, dead. Then their heads animate and tear themselves from the bodies and attack! Emrys sets them on fire, and the dogs get away. As they continue through the woods, the meet a couple Tanuki. A little further on, they meet a beautiful woman casually eating a human arm who insists the disembodied heads are not hers. Then they find a village that looks abandoned, until more of the heads attack them. These Japanese woods are full of strange and unfamiliar beings who utter sinister warnings to them until finally, they find themselves facing a veritable army of Shiba Inus!

At the start of Beasts of Burden: Occupied Territory #3, Emrys and Mullins are facing a pack of Shiba Inus. Emrys immediately explains that there must be a misunderstanding. But the Japanese dogs charge! But not, as it turns out, at them. Instead, they go up against a large, red-skinned demon with a club, and we get a hint that some of these dogs are apparitions controlled by one Shiba Inu. Another one stomps her paw on the ground, causing an earthquake that sends the demon off. They are Makoto and Yuna, and they call the demon an Oni.

Mullins is excited to meet two more Wise Dogs. But they aren’t Wise Dogs, not exactly, although their groups are very similar. Their ancestors were trained as temple guardians, and some formed alliances with human exorcists and sorcerers. I love that dogs have their own cultures and traditions. The four of them talk, but Mullins gets excited by all the strange things he has seen and experienced. He asks about the woman by the waterfall, who Makoto explains was a Jorogumo, wicked, but not the source of the curse they’re tracking.

Yuna wonders if they should call together the Council, a group of the local supernatural beings or Yokai. For a long while there is no response. But then they ease out of the forest – Kitsune, Tanuki, Kappa, Tengu, and more. And there is some debate. The Tengu know it is a curse which is a grudge against the humans. The Yokai are not servants of men; they see no reason to get involved. In vain, the Shiba Inus try to convince them that a shift in the power structure affects them all. But the Yokai agree that the grudge should run its course, although the Tanuki tell the dogs about a great spiritual disturbance nearby before they vanish.

And it is just the four dogs who go onward. Much like back in the States, the Guardian Dogs of Japan are few and they are spread far apart. Then they are attacked by two Jorogumos as well as several of the heads. The Jorogumo also make reference to the Queen’s Plague. This does not bode well!

Beasts of Burden: Occupied Territory #3 continues with the terrific portrayal of dogs. Makoto and Yuna may both be Shiba Inus, but there are subtle differences between them. I also liked at the opening, when all the dogs run toward Emrys and Mullins, we see a pair of them holding back as though they are watching. My first thought may have been, “Leaders?” but this is a book about Wise Dogs, so it was thrilling to see their flavor of magic unleashed against the Oni.

The scene with the Yokai is also wonderful. The dogs call for the Council and we first see long shots of a glorious full moon setting over the mountains. There is no response, and the Shiba Inus look worried, even disappointed. And then the Yokai appear as though they mysteriously melted out of the mountains and the forest all around the dogs. Japan has such a rich tradition in these creatures, and they come to life in this book in a way that looks completely natural. It is disappointing to hear that they do not intend to help, but they feel like creatures that live apart from the human world, and it makes sense.

Beasts of Burden: Occupied Territory #3 has it all – a gripping story, a fascinating dive into the creatures of Japanese folklore, and wonderful dogs who are trying to protect the human race from a supernatural curse. In short, this is a brilliant book.

Emrys and Mullins come face to face with the local Guardian Dogs, as well as the Yokai in the area.