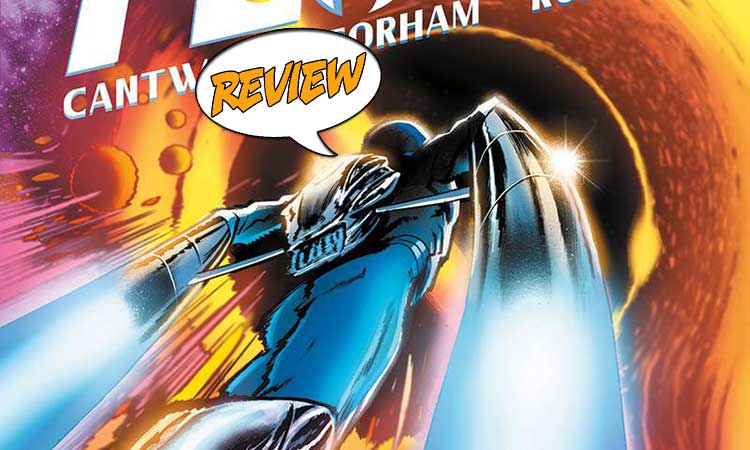 The Blue Flame may be a well-loved vigilante in Milwaukee, but has he got what it takes to save humanity? Find out in The Blue Flame #1 from Vault Comics!

Previously in The Blue Flame: Sam Brausam is an HVAC repairman in Milwaukee by day, a vigilante cosmic hero by night. Working with a small, ragtag group of other vigilantes, they struggle to keep the city safe while also trying to live their civilian lives. But somewhere along the line, humanity drew the attention of the greater universe. Humanity is on trial, and they don’t even realize it.

The Blue Flame #1 harkens back to the era of comics when one nifty invention could literally power you to adventure, even if it lies well outside of our own solar system. It’s a concept that I always find delightful. I also think it’s a clever bit of writing to introduce this issue as though we are joining an existing comic already in progress. This is a smart way to start an arc that is also an origin story. We begin in the thick of things, then circle around, and then get to speculate on how we got to where it started.

In this case, the Blue Flame is alone somewhere in the center of the universe, apparently lost and trying to figure out where he is. He finds a world with a homing beacon and an acceptable atmosphere and lands on it to look around. He has time to take in the sandy landscape before he is approached by a small troop of armed locals, and fortunately somebody has a translator device. They tell him he is being conscripted into compulsory service. He resists; they capture him. And before long, he finds himself on trial.

The next scene is on Earth. Sam wakes up, has some coffee, packs a lunch, and steps out into snow. His neighbor is already out and shoveling, and they briefly commiserate. But, truth be told, Sam is in a good mood and doesn’t seem to mind shoveling a little snow. Then we see him at work repairing a boiler. And then, at the apparent end of the day, he changes into his Blue Flame costume and we hear, over the car radio, that this is the first night of a classic car show, and the Night Brigade are making an appearance. This would be his vigilante group. Sam drives to their clubhouse.

Not only are these guys working-class vigilante heroes, but they seem to be on a budget. I like how mundane their preparations are. The Feat (Bud) is having a beer. Theia (Zola) is trying to figure out food. When she orders pizza, there’s a request to not order pineapple and ham. They sound, if not like friends, like people who do know each other. Only one of them, the Crimson Visage (whose secret identity is indeed secret) is leery about a public even like this.

They don’t have a member whose special power is money, or not exactly. Swiftbird (Heather) comes from a fairly wealthy family, and she has been maxing out her credit cards for the Brigade. I like this as a complication; it helps make the group feel really down to earth. In their conversation, we learn that Sam and Zola are into each other, Bud likes to joke, etc. They go to their event, people cheer them and take lots of pictures, and then the gunshots begin.

STRONG FROM EARTH TO THE FAR REACHES OF THE UNIVERSE

The art of The Blue Flame #1 is solid, admirably matching the flavor of the words. From the opening with its dramatic introduction text and colorful scenes of outer space to winter in Wisconsin to the Night Brigade’s appearance at the auto show, what we see complements what we are reading. The alien planet looks otherworldly, and I like the nod to old-fashioned aliens in that the helmets they wear give them the appearance of being bug-eyed monsters. It soon turns out that the tribunal Sam is at is made up of multiple other sentient beings.

The hero designs of the Night Brigade have an interesting feel. While parts of them are skin-tight, they have a distinctly “home-made” touch. This is especially the case for the Crimson Visage, who looks like a regular guy in an Army jacket, but with a red mask covering his entire face and goggles. The women have outfits that are cute and tightly fitting, but they don’t need to use toupee tape to prevent costume malfunctions. Even The Feat has pockets and knee pads in his pants.

The Blue Flame #1 is an entertaining read. The balance between adventure situation and origin story is deftly handles, giving us just enough of each to inform us and keep us interested and looking forward to the next issue. So far it seems like a solid start.

No one said that being in the superhero business would be lucrative…or easy.