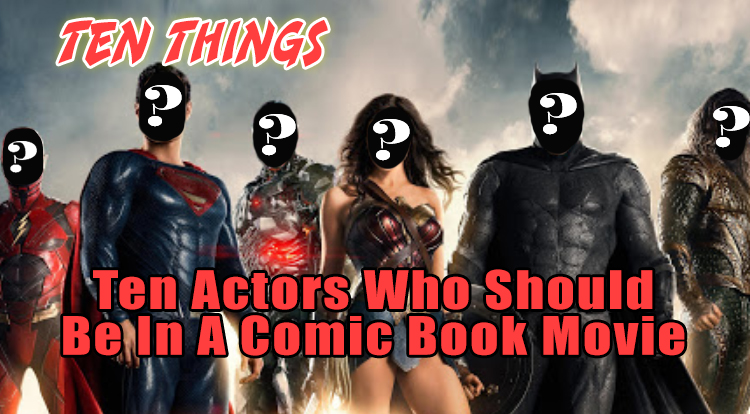 Ten Actors Who Should Be In A Comic Book Movie

Some actors are born to play schlubs, some to play witches… But there are a few that I just can’t believe aren’t already movie super-folk. Welcome to Ten Things: Ten Actors Who Should Be In A Comic Book Movie!

Whooshman-Bicarbonate Films, in conjunction with An Amateur Comics Historian and forcing myself to not use Ashley Williams, Presents:

TEN THINGS: TEN ACTORS WHO SHOULD BE IN A COMIC BOOK MOVIE! This one might have an asterisk, since she spent the better part of half a decade attached to the role of Squirrel Girl before the New Warriors live-action property finally succumbed to development hell.  Even though the film went south, she has both voiced the character in cartoon form and cosplayed her adorably in real life. Milana needn’t be relegated to Doreen duty, though, as she’s smart, she’s funny, she directs and she speaks fluent Russian. You need a Void for your WildCATs movie? You need a Fantasma for your Winter Guard movie? Heck, you just need somebody talented, cute and together? You might need Ms. Vayntrub. Probably best known for his run on ‘Grey’s Anatomy’, Jesse has also done motion-capture and voice work as well as getting murdered alongside Thor and the Yellow Jungle Fury Ranger in ‘The Cabin In The Woods.’ At a relatively young 40 years old, he’s also an activist and public speaker, and would make a truly amazing member of any cast. Put him in a role like Michael B. Jordan’s Killmonger or Tom Hiddlepants’ Loki if you can’t make him a hero, but he would absolutely be a boon to whatever film you’re making. I personally think he’d make a killer Hardware. The best part is that Awkwafina already has a secret identity, as she was born Nora Lum in Queens, New York. Savagely funny and still able to do drama, she’s a force in everything I’ve ever seen her in, and if you question her ability play a super-type, you should look at ‘Jumanji: The Next Level’ where she plays video game character Ming Fleetfloot.

Anyone who wants to remind me that she’s in the upcoming ‘Shang-Chi: Legend of the Ten Rings’ film should note that this topic was submitted months ago and that the future tense of “should be” still counts, since the movie will be out sometime this fall. It just proves I’m ahead of my time! Her style of comedy may not be for everyone, but Mindy is undeniably talented, smart and creative. After interning with Conan O’Brien, she has become a writer, stand-up comedian, director and more, and her distinctive voice just screams out for a super-power to go with it. Best of all, several of her characters (especially Dr. Mindy Lahiri of ‘The Mindy Project’) already dress like superheroes, and she always looks ridiculously good. Casting her would also help the dearth of South Asian and Indian characters, so it’s a win/win. Even if you only know him from ‘Hamilton’, you’ve seen Okieriete’s range in action, going from the brash Hercules Mulligan to the staid James Madison in the course of the play. I honestly didn’t realize at first that he was the same actor, and I’d love to see him in a comic-book style film. I don’t expect to ever get a live-action Amazing Man from the All-Star Squadron, but if I do, he’d be great at it. Of course, he’d likely be great at whatever role they give him, but I’m the Amazing Man fan, so a man can dream. Did somebody say live-action Morgan Le Fey? With a career that stretches from Broadway to Nickelodeon to ‘Sex, Drugs & Rock & Roll’, Liz is kind of amazing, especially for someone so young. She has an amazing vocal range, and while I’d love to see her as a hero, I feel like she’s tailor-made for an evil (or at least morally grey) character. thanks to her expressive eyebrows and ability to chew scenery. I don’t watch ‘Dynasty’ regularly, but occasionally I have to stop and marvel at just how good she is at soap opera, and everybody knows that comic books are just soap opera with laser eyes. In short, cast Liz Gillies. The end. Having been a professional wrestler for more than 30 years, Chris Jericho has been around the block (but he’s still younger than Robert Downey, Jr. by half a decade!) and can do good and evil with equal skill. One of the greatest talkers in wrestling history, Jericho is an actual rock star as well as a metaphorical one, and would make an amazing Etrigan The Demon, even if you just motion-capture his performance and use his voice. Otherwise, there are half a dozen characters that he could play without trouble, including ’90s era Nomad. Honestly, I can’t believe that they haven’t done this one already. I mean, the woman is an icon. Hey, speaking of characters who are already in shape for the role, the moment where Harper, as Chidi Anagonye, took off his shirt in an existential quandary caused quite a few gasps in my house. But aside from the superhero build, he’s also a really subtle and talented actor, and one who could KILL any number of serious superhero roles. You need a good Anarchist for X-Statix? You wanna do Freedom Beast? Heck, are they still looking for a Black actor to play Superman? He would be great at any of those roles, but most of all, I want to see what happens when Danny Rebus gets struck by radioactive lightning. I promised myself that I wouldn’t let this list turn into a list of Matthew’s massive crushes, but hear me out on this one: Not only is she tall, poised and hotter than the Kryptonian sun, Graham is an amazing on-screen presence, as seen in her hosting of ‘American Beauty Star’ and her turn on ‘Lip Sync Battle.’ Not only that, it’s well past time that we see some body positivity in our superhero flicks (and no, I don’t mean Thor in a fat suit.) I’ve long said that if you paint her green, you have an amazing She-Hulk, but honestly, we’d probably have to create a new character for her, as there are almost no curvy, heavy or fat supers who aren’t cruel jokes of one sort or another.

And please, don’t feel the need to try and explain to me why there aren’t. Life is short, none of us has that kind of time to waste.

Thanks to Faithful Spoilerite J.M. Meunier for this week’s topic, Ten Actors Who Should Be In A Comic Book Movie, but feel free to follow along @MightyKingCobra to suggest your own! There’s always more Ten Things madness on my Twitter or check out the full Twitter archive here! As with any set of like items, these aren’t meant to be hard and fast or absolutely complete, if only because BLAH. Either way, the comments section is below for just such an emergency, but, as always: Please, no wagering!