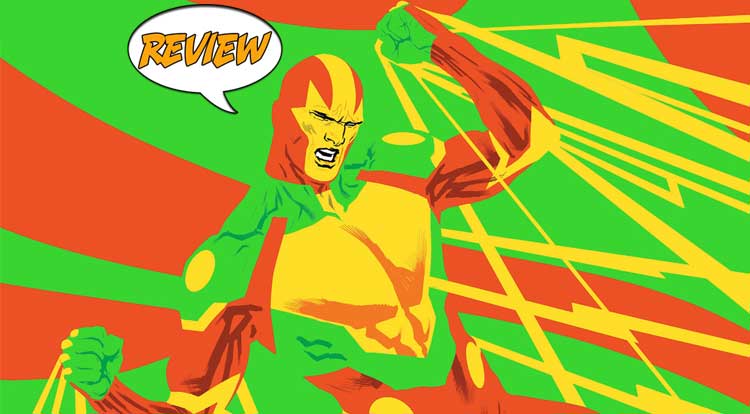 Shilo’s back, and he’s setting his sights on the Greatest Stunt in Human History.  But what about those with their sights on HIM?  Your Major Spoilers review of Mister Miracle: The Source of Freedom #1 from DC Comics awaits! MISTER MIRACLE: THE SOURCE OF FREEDOM #1

Previously in Mister Miracle: The Source of Freedom:  The Mister Miracle show used to be the hottest ticket in town, whether you caught him onstage escaping from perilous traps or spotted him on the streets of Metropolis taking out bad guys.  What Shilo Norman forgot is the first rule of both showbiz and super-heroing: always leave them wanting more.  Now it’s time to start showing the world what a miracle man can do.  Showbiz/superhero rule #2: timing is everything.  There’s a new performer in town who wants to knock Mister Miracle off his pedestal and stake a claim to his famous moniker!  Can Shilo break free of this trap?

We open with Shilo Norman nearly 62 miles above the Earth, right where the atmosphere ends, preparing to make a space jump to the surface.  As he falls, he converses with his Mother Box, only for things to seemingly go wrong.  As the world watches in horror, Mister Miracle achieves terminal velocity, hitting the Earth and leaving a massive crater…  where Mister Miracle sips a sod, entirely unharmed.  It’s an impressive achievement, but the rest of his life is less together.  His agent warns him that audience engagement is down, and the agent thinks he should reveal his face.  Shilo isn’t sure, and they have a discussion about race and whether or not being Black is the reason why he doesn’t want to unmask.  Shilo also goes on a disastrous date, has a TV appearance attacked and his apartment ransacked, two of which are related to being stalked by a mysterious villain, the other due to his self-absorbed nature.

EXPECTATIONS ARE SOMETIMES A BAD THING

I am a long-term fan of Mister Miracle as a character, but I tapped out hard on the last MM series, the one where Scott Free had to deal with his own PTSD and the Anti-Life Equation all at once.  This issue, featuring as it does the other Mister Miracle, feels like it’s more to my taste, especially in how it presents him as both hero and entertainer.  Fico Ossio’s art is remarkable, and very different from his work on ‘No One Left To Fight’.  Where that book had a slick, animation-style line, this issue features much more contrast, with heavier shadows and a more traditional superhero line.  It looks great, though, and Ossio’s design for Mister Miracle balances the original Kirby design with the Seven Soldiers era revamp, making for a character that’s modern and classic all at once.

BOTTOM LINE: HAS ITS MOMENTS

I feel like there’s definitely room for this series to up the ante, and perhaps even improve on some of the moments in this issue, especially as it relates to our protagonist.  But Mister Miracle: The Source of Freedom #1 gets a lot right, visually and in terms of story, and addressing the character’s identity is a must for the 21st century, leaving us with an impressive 3.5 out of 5 stars overall.  The last page reveal of the villain, who claims to be the daughter of Scott and Barda Free, raises a lot of questions and sets us out on a story that has a lot of potential for conflict, drama and fun.

MISTER MIRACLE: THE SOURCE OF FREEDOM #1

Ossio gives us some spectacular art, and the story raises interesting question about being a hero and a Black man in the year 2021, making for an interesting overall package.