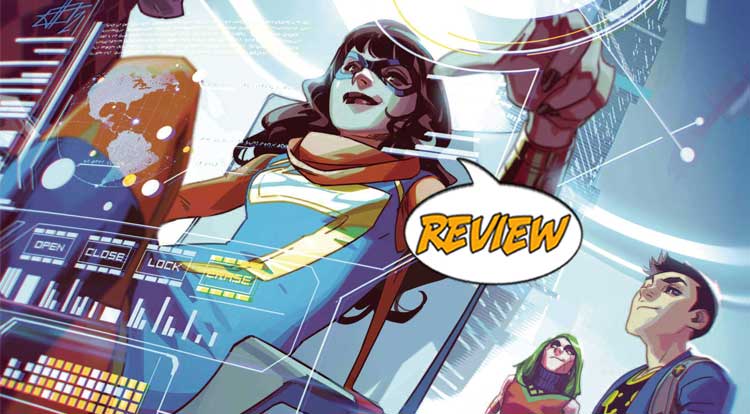 The Champions may have been outmaneuvered by Roxxon for a moment, but now?  It’s time to fight dirty.  Your Major Spoilers review of Champions #7 from Marvel Comics awaits!

Previously in Champions:  The Champions are playing dirty to beat Roxxon at their own game – including implanting two of their own as interns to take down the corporation from within.  But in order to earn the trust of their cutthroat Roxxon supervisors, they’ll have to deliver an unwilling spokesperson: Kamala Khan.  Will Ms. Marvel agree to become the face of a company and a law that she hates, or is it too high a price to pay for victory?

After the launch of Roxx On!, the new social media app from the corrupt Roxxon Corporation, the Champions are dealing with a lot of frustration.  Not only is the app full of bots who are manipulating the young heroes and their supporters, they’re using it to try and strengthen Kamala’s Law, the statutes that made teenage heroes temporarily illegal.  Worse still, while Spider-Man infiltrates Roxxon as their new intern, he finds that their working hand-in-glove with CRADLE, the disgraced government agency that had them on the run for so long.  Nova, sadly, got rejected from the internship program, and overheard them calling him “boring”, which leads him to take a new tack.  After the team breaks up an attempt by CRADLE to arrest a number of their associate members at a protest, he confronts Miriam and promises to bring her a celebrity for their newest intern: Kamala Khan!

NOVA SWINGS FOR THE FENCES

Champions #7 features very little costumed action, but the moments that it does have are incredibly well-done by Vecchio, with an especially wonderful sequence featuring Nova and Snowguard evacuating civilians before the CRADLE thugs arrive.  But a cute sequence with Sam and Miles interviewing for open positions (with poor Sam forced to dress like 1965 Peter Parker) is equally impressive, as is a moment where Viv Vision and Ironheart work together while Viv’s dad, The Vision, keeps asking if they need pizza for their “sleepover.”  This issue’s story keeps up the tension, with a couple of moments where it seems like they’re going to be discovered, only for things to suddenly take a turn, and the last page featuring a shocked Ms. Marvel is excellent.  Looks like Kamala is going to be the face of Kamala’s Law after all.

With a smart take on social media and a plot that uses everyone effectively, Champions #7 makes for an entertaining read (with the VIP dialogue going to Kamala’s acknowledgment that The Avengers are Millennials and thus don’t know anything) with really lovely art, earning 4 out of 5 stars overall.  I might like to see more of the team members like Falcon, Snowguard and The Locust, but the use of Spider-Man, Nova, Viv, Ms. Marvel and Ironheart is top-notch.

The stakes are high and the plotting is tight, but the real star is Vecchio's art, and maybe Sam "Nova" Alexander.