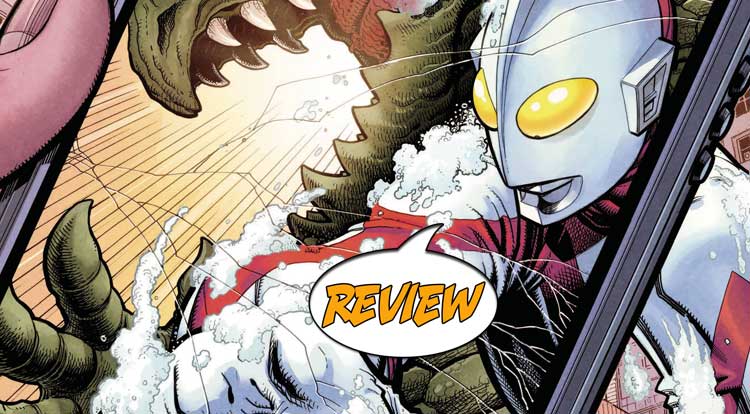 Ultraman is at the mercy of a massive kaiju!  But what’s is the creature’s secret?  And who sent it?  Your Major Spoilers review of Trials of Ultraman #3 from Marvel Comics awaits!

Previously in Trials of Ultraman:  It turns out that the forces aligned against the USP and Ultraman are far more widespread and more organized than our heroes had ever suspected. If they’re going to survive, they’ll need a new ally of their own… and the man they’re looking at just so happens to be one of the most powerful and influential people in the world.

But what’s his hidden agenda?

ARE KAIJUS EVEN REAL?

Ultraman is down for the count as our story begins, but his opponent has been revealed not to be a kaiju at all, but a giant robot in monster form.  As their power runs out, Ultraman leaps into action, stealing the creatures power core and throwing it out of the city with only seconds to spare.  Back at USP headquarters, he returns to being just Shin Hayata, and interviews a man named Dan Moroboshi about recent events.  (Remember that name: It’ll be important in a moment.)  Analysis of the exploded robot kaiju reveals that its technology is extrapolated from USP’s own technology, leading them to believe that it’s one of their own former agents behind the attacks.  They track down one Katsuhiro Kato, interviewing him about his new company, only to have him reveal the next monster attack, just as it starts!

THE USE OF CHARACTER NAMES IS DISTRACTING

My biggest complaint with Trials of Ultraman #3 is the use of established Ultra series characters in new roles.  Dan Moroboshi, the lost USP agent who appears in the first half of the issue, is actually the host for Ultraseven, the Ultraman who came AFTER Shin back in 1967, while Kato, the suspect, led the Monster Attack Team in 1971’s ‘Return of Ultraman.’  It makes for a distraction for me, as it might for other long-term Ultra viewers, but might not be an issue for those new to the Ultra world.  The story in this issue has moments of brilliance (especially a monologue from the head of USP’s tech squad about the brilliance of mecha-kaiju) but there are a lot of moments that might puzzle a first-time reader, especially one who picks this issue up without reading #1 and #2.  Manna’s art is quite good, though, as the battle sequence are exciting and the monster designs inventive, especially the ones that are clearly meant to be inspired by previous TV and movie kaiju.

I like the modern elements of Trial of Ultraman #3, like the weird conspiracy theorists who believe that the monster attacks are false flags to support expansion of government power and the art makes its point very well, earning 3.5 out of 5 stars overall.   As with most revamps and relaunches, my biggest issue comes in having to remember who everyone used to be, which can be exhausting.  Still, the presence of Moroboshi makes me wonder if more Ultramen are on the horizon, which could be a lot of fun in comic form.

The story applies a modern lens to the kaiju vs. superhero genre, but the use of character names from the Ultra series is a bit distracting. I like the main character, though.