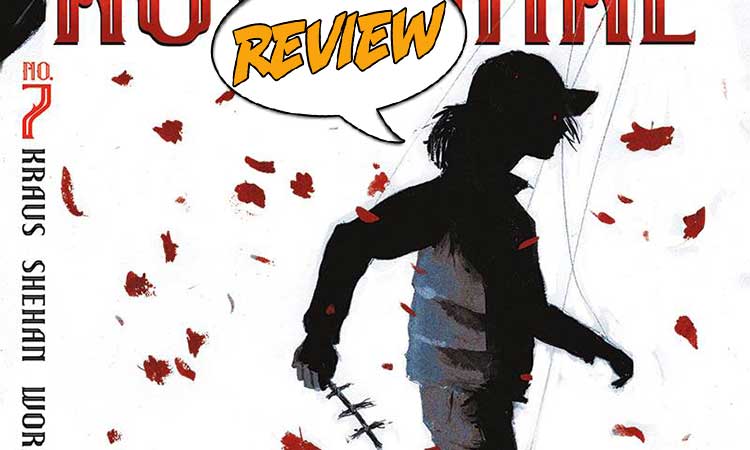 Kat and Sybil try to leave town, but instead find themselves in the midst of a ceremonial gathering of the townspeople. Who is the Sapling and what is going to happen to her? Find out in The Autumnal #7 from Vault Comics!

Previously in The Autumnal: The town of Comfort Notch is full of gossip about Carol Ravintzky. As Kat does research at the library, the topic of the gossip turns to her. She grabs a bunch of newspapers from the archives and sneaks out. The gossip beats her home. Mrs. Dobson urges her to leave town. But Kat has decided to stay and fight for the house that is now hers. It is the night of the autumnal equinox, and Carol told her how to keep her house safe. She boards the windows and seals the edges of the door. She rakes the yard furiously. Rob also urges her to leave, then walks alone into the woods to prove there is nothing there. The wind picks up, the leaves start to fall, and Kat makes the snap decision to leave. But as she and Sybil try to leave town, one of her tires blows out, and the road is closed.

THE INEVITABLE CANNOT BE AVOIDED

As The Autumnal #7 opens, Kat and Sybil have found the townspeople in the woods, all chanting, “The Sapling,” which is creepy. They quietly plan to walk around the roadblock and avoid them, but instead are grabbed by a couple men and brought into the crowd to much applause and smiling faces. Kat begs them not to hurt her or Sybil. A smiling Mayor welcomes her and tells her they love her unconditionally, and that she has found her home. Have I mentioned creepy? They sure look like a cult, and right away they prey on her vulnerabilities. Everyone who was mean to her greets her with a smile.

The Mayor says that Clementine herded them here tonight. He also denies this is a cult; to him it is merely an arrangement. Then they take Sybil away. Kat accuses the Mayor of taking her to where all the missing children go. And he tells her there are no missing children. None of them are buried in the cemetery. Mrs. Dobson reveals herself and tells Kat she should be proud that Sybil was chosen. Then they talk about how they all knew from the day Kat and Sybil arrived that it was Sybil. The librarian tells her they will waive her fees for running off with the newspapers. And much like a master villain revealing his plan, the Mayor admits to their dispatching of Aubrey Dobson and Carol Ravintzky because they were trying to drive Kat and Sybil away.

And then he tells yet another version of the Clementine Biddle story. In this one, the baby was not hurt. From the baby’s own wastes, the trees sprang up, the trees that allow everyone here to prosper. But periodically Baby Biddle would take a human life, and the Autumnal Society came into being as a way to make the “offering” less random.

Sybil returns in a red dress and wearing a crown of twigs. The people sing Clementine’s song. A procession forms. More people greet Kat, who starts thinking, uncharacteristically, about how she was never cut out to be a mother, and how much easier it would be to start over without her. And Kat watches as Sybil walks alone into the woods.

The Autumnal #7 continues to have powerful art. We’ve known all along that something like this was coming; this is a horror book after all. We’ve watched enough movies to know that there is probably something under the surface of the otherwise perfectly picturesque little town. But when we see the opening nine panels of people chanting almost ecstatically, it feels absolutely chilling. It is the ultimate in gaslighting as the closeknit town who have been treating Kat as an outsider suddenly welcome her into their ranks. We know what Kat has uncovered in her investigation, but we see the doubt creeping over her face. Are her accusation too fanciful? We wonder even as we see townspeople with flaming pitchforks in the woods.

Here even more than the previous issues, the color is almost a character all by itself. The blazing red-orange of the trees Comfort Notch is known for is represented not by the sinister leaves we have seen before, but by firelight. It is night, after all. We don’t see Clementine Biddle, but her presence is all around. Sybil’s red dress, the flames, the way people are lit up, even the reflection of the flames in their eyes. And it is fascinating how such warm colors come across as chilling.

BOTTOM LINE: A NAIL-BITER OF A BOOK

In this penultimate book of the series, The Autumnal #7 takes everything it has built on so far and swirls it into a crescendo of emotions. Every time we have heard Clementine’s story, there has been another twist to it. We still do not know exactly what lives in the woods, and it is terrifying.

On the night of the Autumnal Equinox, all paths lead into the forest.