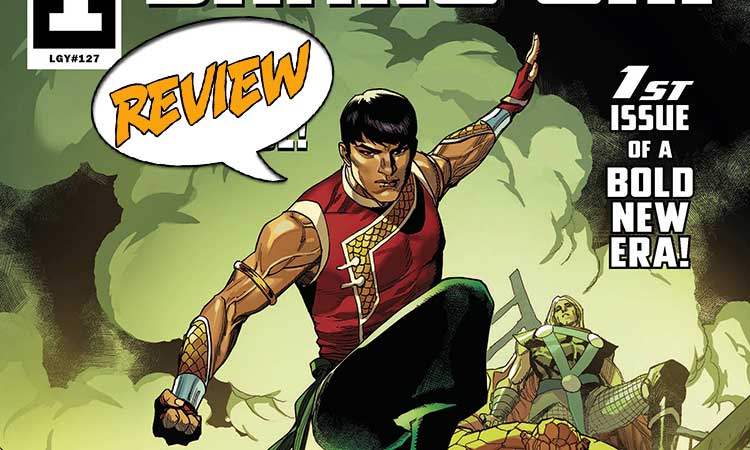 Shang-Chi is on a quest to return honor to his family’s legacy.  But to do that, he may have to go through the heroes of the Marvel Universe.  Your Major Spoilers review of Shang-Chi #1 from Marvel Comics, awaits!

Previously in Shang-Chi: Shang-Chi has finally taken his place as the leader of the Five Weapons Society. But using an evil secret organization as a force for good won’t be easy.

Shang-Chi opens up with Shang-Chi on a date.  As he attempts to woo Delilah Wang, his Esme, his sister who’s on a stakeout trying to find information on a drug ring, keeps interrupting via text.  Shang turns off his phone, which forces Esme to become more drastic and bring a possible informant, forcibly to the restaurant Shang is at.  The ensuing struggle catches the attention of Spider-Man who’s in the area staking out a weapons ring.  He concludes that the two rings may be connected and insists on teaming up with Shang, regardless of his protests.  Their investigation leads them to a medicine shop that’s a front for illegal activities.  It turns out that the owner is selling drugs that turn people partly into animals.  During a fight, Spider-Man is infected and Shang-Chi and Esme have to restrain him. After Spider-Man turns back to normal, Shang reluctantly calls in The Five Weapons Society to clean up the place, which makes Spider-Man suspicious.

Not every first issue of a new series needs to be a bombastic and crazy opening.  But, with how much this was hyped to be “Shang-Chi VS. The Marvel Universe”, there wasn’t much happening here in terms of fighting between heroes, or really any fighting at all.  And, what we did get was often over quickly with little tension. The big fight between Shang-Chi and Spider-Man was over in a single spread. Much of this first issue is devoted to bickering between Shang and Esme, who appears to be poured from the same mould as early Damian Wayne in terms of insufferable. I will give this issue credit in its restraint.  So many times have we seen these “good guy uses bad guys to do good” type stories kick off with something dramatic that immediately sets the other good guys on their trail.  This doesn’t have this and the suspicion at the end from Spider-Man is more subtle and reasonable.  Also, the running discussion about Spider-Man’s, spidey sense, was decent and led to a decent closing line between the two.

THE BOTTOM LINE:  NOT A PROMISING START

Shang-Chi #1 was an uneventful first issue that doesn’t really establish anything going on here other than that Shang is now the head of his father’s old gang, which was aptly explained in the first 2 pages of the issue.  Pacing issues and lackluster action sequences also plague this issue.  On a positive note, the creators do manage to avoid some cliches that typically come with this type of story which suggests that things might get better. 2 out of 5 stars.

Shang-Chi #1 hypes itself via it’s cover and solicitation of being the start of a fight between the titular hero and the rest of the marvel universe, but if this issue is any indication, seeing those fights won’t be worth the price of admission.