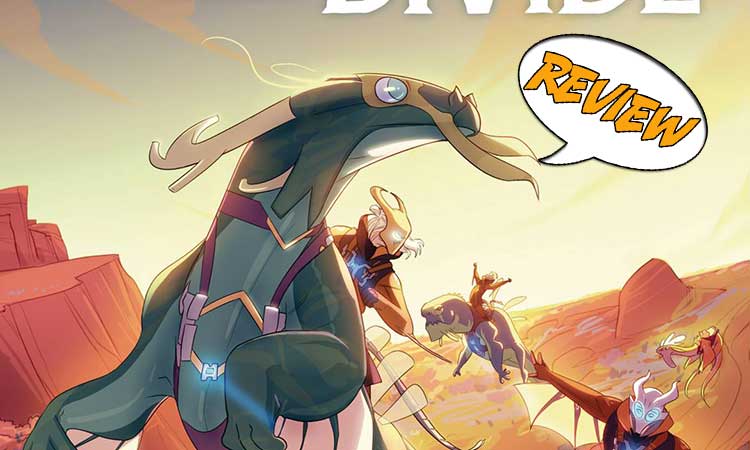 Rangers of the Divide #1 Review

Commander Knight comes looking for Rangers and finds only a handful of new cadets. Are they up to the challenge of the most dangerous mission of their lives? Find out in Rangers of the Divide #1 from Dark Horse Comics!

RANGERS OF THE DIVIDE #1

Previously in Rangers of the Divide: The nations of Veil and Ryllion have been at war for as long as anyone can remember. Between them lies a neutral zone, an area patrolled by the Rangers of the Divide. These peacekeepers and protectors are inducted as children and spend their lives patrolling the zone. It is rare that they ever leave their post – rare, but not unheard of.

A SMALL GROUP OF NEW CADETS

Rangers of the Divide #1 sets the scene with a long shot of the Wilds, the land between the nations of Veil and Ryllion. Much of it seems to be lush forest and grasslands, teeming with wild creatures. It’s beautiful country, if alien, as the focus shifts to an outpost where some of the Rangers of the Divide have brought their dragons down to the river. The narrator briefly orients us and within a couple pages we learn that something big is going down.

The narrator is Commander Knight. At this outpost, he finds only a handful of cadets. All the Rangers in their unit left and these young people have no idea what is going on. The Commander makes a snap decision and orders the Cadets to come with him. He also orders them to look around for any supplies they can find and to load up their dragons.

Despite the dragons, this appears to be a society that has computers and special weaponry. In other words, this is not your stereotypical medieval fantasy world with dragons and said dragons are not stereotypical either. They’re actually pretty cool, but then I am a fan of dragons in general.

We get a few minutes alone with the cadets, three young women (Elsie, Bryce, and Camille) and three young men (Ivan, Brandt, and Arno). This is enough time to establish some conflicts among them. They hear something outside the building they are in, and Elsie is the one who investigates, and finds herself up against an enormous creature, a Wendigo. She fights it alone until the Commander comes in on his dragon to take it out. But this action sets Elsie apart as the apparent leader of the new recruits.

The Commander is less than impressed by the recruits who didn’t help her out, though, and decides to give them all a test before he takes them out with him. He lures in another Wendigo, orders them to fight it as a team, and heads off to watch from a distance. After a little disorganization, the cadets finally work together and defeat the creature. They’re going with the Commander on a mission they know nothing about and that they are not in the least prepared for.

It is an interesting premise with a hint of a bigger mystery to unfold, in a world that is a so far pleasing blend of fantasy and science fiction.

A PEEK INTO AN OTHERWISE LOVELY WORLD

Rangers of the Divide #1 opens with some interesting world building. While the set-up is that this is a neutral zone between two countries, it appears to be quite vast. The forest supports herds of elk-like creatures and the plains have their own huge herds of large creatures. We see the colorful and interesting dragons and their riders briefly. While the dragons appear to be able to glide, they do not have wings. They have double tails, which is interesting, and which does not seem to be a detail shared by other creatures, perhaps somewhat incongruously.

I appreciate that this is a world where the cadets include both men and women. They dress in a uniform style, but the boots and vests they wear appear to be practical. When they fully suit up, their outfits appear to include some sort of armor, powered packs, and an appendage that looks like a long prehensile tale. I like the design. The tails are interesting. We see them in use to kill (or at least stun) the Wendigos.

Rangers of the Divide #1 hints at there being more drama yet to come. Elsie comes across as a natural leader, and I like seeing a young woman who is willing to take charge. The Commander is hiding a lot of information and inwardly seems bordering on overwrought. Still, this is a solid read and I am curious to find out more.

Rangers of the Divide #1

A band of cadets with no experience find themselves off on an important mission.