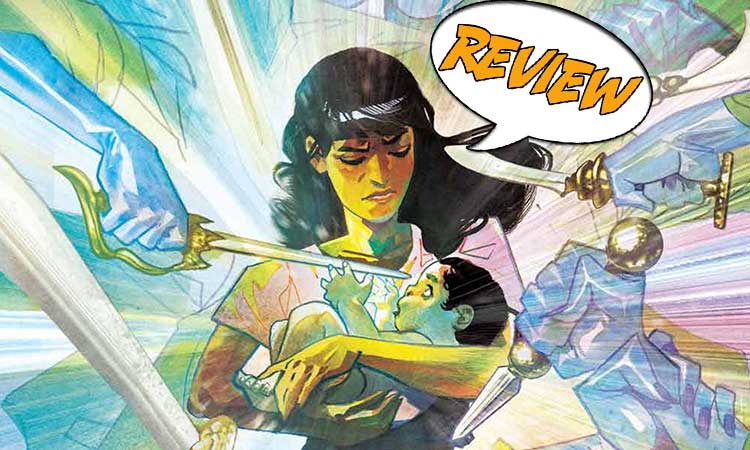 The Many Deaths of Laila Starr #2 Review

The Avatar of Death has become the human, Laila Starr. She has been at the deaths of millions, but does even she know everything about death? Find out in The Many Deaths of Laila Starr #2 from BOOM! Studios.

THE MANY DEATHS OF LAILA STARR #2

Previously in The Many Deaths of Laila Starr: A baby is born, a young woman dies, and Death is fired. The world of the Gods parallels corporate life, and when the Three-Headed God learns that a soon-to-be-born child is going to bring eternal life, he knows it is time for a little downsizing. Death’s severance package includes a human body and life as a mortal, plus she manages to get placed near the baby. Her new life begins in the body of the young woman who died – Laila Starr. The baby’s name is Darius. It should be so easy to kill him…but she can’t. And she runs out of the hospital in a panic, gets hit by a truck, and dies. Only to be brought back to life eight years later by the God of Life.

THE MORTAL VIEW OF DEATH

The Many Deaths of Laila Starr #2 opens with a conversation between Death/Laila Starr and a crow. Eight years have passed. Mumbai is a big city. She has no idea how or where to find Darius. She can actually talk to the crow, and the crow to her. The bird is a funeral crow. He gets offered rice at a funeral, and in turns carries the soul to, well, to wherever they go now. He offers to take her to a funeral.

The story cuts to Darius. When he was eight, he ran away from home briefly, and he had his first conversation with Death. This may tell us where this is going, but the story takes its time to fill us in on the details. And this is fascinating. Darius’s family is well-off. When he was even smaller, they lived on the outskirts of the city in a house with a plot of fruit trees, and his family employed a servant to take care of the trees, a big man with dark skin, a man named Bardhan. Darius was fascinated with him and loved hearing his stories and spending time with this man who worked so hard, but who always had time for the little boy.

But Bardhan was of another social class, and he was not allowed any of the fruit he worked so hard to harvest, or to go inside the house at all, even to use the facilities. Darius did not think these societal rules were right, and shared fruit with Bardhan who casually asked that the little boy not forget him.

Now Darius’s family lives in the city and Bardhan drifted out of their lives until his daughter comes to tell them the news that he has passed away. Darius overhears this and wants to go to the funeral. His parents tell that they sent money to the family, and they don’t visit funerals for his kind. This is when and why Darius runs away.

Laila and the crow discuss her inability to take the baby’s life. She, who brought death to thousands if not millions, does not understand the process from the mortal side of things. One of the things that hits me so hard about this book is how deeply profound it is. It is also deeply human, and there are threads of humor woven into it as well. And in doing so, it hits on so much of what it means simply to be human.

The crow leaves and Laila, down at the shore, meets a sniffling young boy, Darius, although she does not realize it. In his grief, he tells her about Bardhan and how he never thought he could ever go away. Laila tells him something from her conversation with the crow, that no one really goes away as long as they are remembered.

Darius runs off. Laila tries to find him to keep him safe, but the relentless movement of the funeral takes her back to the water. As she catches sight of the boy, his parents find him and call him by name. Laila realizes who he is…but it is too late. She meets her death once again.

The art of The Many Deaths of Laila Starr #2 is lively and evocative. From individual panels that communicate whole thoughts, to visual connections and symbolism, reading this book is a true delight and a treat for the eyes. Characters may be drawn with some exaggeration, but even that fits the book well. For example, Bardhan is drawn as an incredibly tall man. When he works, his entire body is curved with the effort of his tasks. When he is with young Darius, his very arms and legs are like tree trunks. I like to think that this is how Darius sees him, as a giant, as someone larger than life, as the strongest and kindest man he has ever seen. And seeing him through those eyes, we understand how Darius feels he must brave the outside world to go to the funeral.

The images of the funeral itself are quite moving, even moreso because they are juxtaposed against Laila Starr’s conversation with the crow and her meeting Darius. The rituals of India may not be familiar to us all, but funerals are, the idea of a ceremony that takes place to mark the end of a life. In this case, there is a pyre and the colors and play of light are incredibly lovely.

The Many Deaths of Laila Starr #2 is strong and thoughtful. This is a story you can lose yourself in. When it was over, I was immediately eager to find out what is going to happen next.

The Many Deaths of Laila Starr #2

The Avatar of Death has lost her job and struggles on her new mission, for life is distracting.