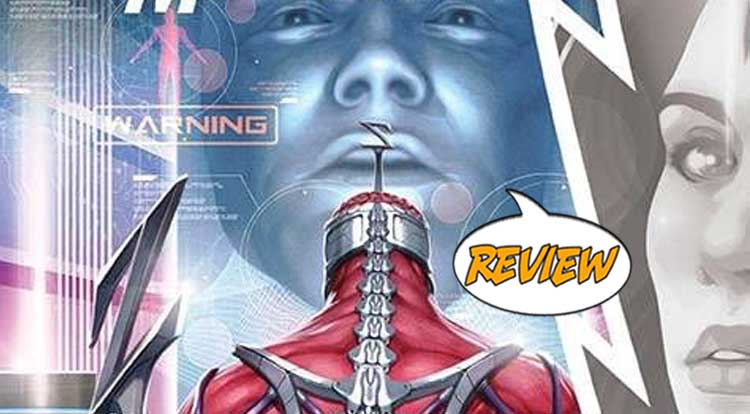 Previously in Mighty Morphin’:  It’s The New Mighty Morphin’ Team versus… The New Green Ranger!  But whoever’s left standing will have to deal with Lord Zedd’s shocking machinations…

…and his even more surprising ally.

THE BETRAYAL OF THE GREEN RANGER?

With last issue’s reveal that Skull’s new girlfriend, Candice is actually a member of Zordon’s race, you’d think things couldn’t get more shocking… and then, Grace Sterling and her new Green Ranger partnered with Lord Zedd!  This issue opens with the Rangers splitting up, with half the team trying to recover Tommy’s Tigerzord and the other half surrendering to Goldar.  The ground team is stunned to find their city in perfect order, with Zedd’s monsters keeping the peace and fighting crime, while the locals use the fallen Zords for photo ops.  Kimberly, Rocky and Adam are taken to Lord Zedd, who offers them a deal that they aren’t sure that they can refuse.  He will leave the planet and never return to Earth again, in return for one simple thing…

EVERYTHING IS ABOUT TO CHANGE

Each issue of this new volume has had opening sequences flashing back to Zordon’s time as a warrior on Eltar, and they’re finally starting to connect to the main storyline, which I greatly appreciate.  (They’ve been a little bit hard to put together with what’s been happening with Lord Zedd.)  With this issue’s reveal that Grace has been working with Zedd, things have gotten very complicated in a very adult way.  After all, isn’t it better to find common ground and talk to your enemies to hammer out a compromise?  Obviously, she’s wrong and all hell will soon break loose, but it reminds us that not everyone wants to be a superhero, nor do they have the Power Ranger mindset.  Renna’s art is excellent throughout the issue, but it’s especially fun during the battle to reclaim the TigerZord.  I’m also really impressed with the last two panels of the comic, wherein Zedd makes his unholy offer and the Rangers goggle at what he’s saying.

In short, Mighty Morphin’ #7 is a book that ups the ante in interesting ways, setting up a conflict that won’t be easily resolved with a karate kick and doing it with really well-constructed art and plot twists that feel perfectly natural and utterly surprising all at once, earning 4.5 out of 5 stars overall. It’s my fervent hope that Billy and Grace have something up their sleeve for when Zedd breaks out the sudden and inevitable betrayal, but regardless of what happens next, this setup has been expertly crafted to break the Power Ranger rules in interesting ways.

An unexpected opening sequence leads to a string of cool moments, ending with an even bigger surprise. This is a good issue.

It is troubling, however, to have Zedd's armored butt lovingly rendered on the cover.