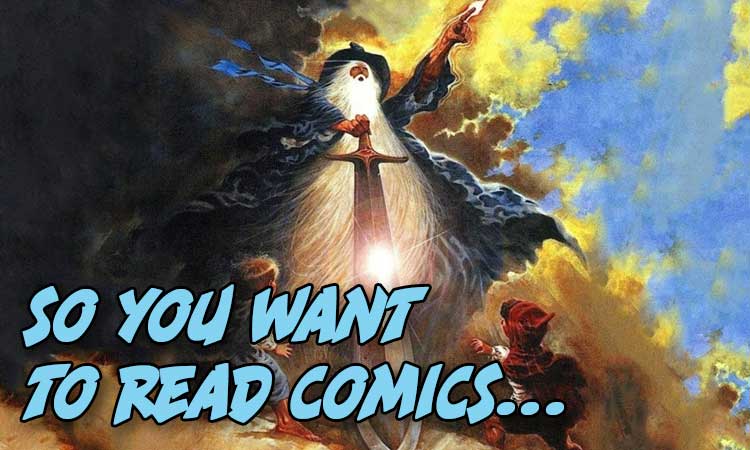 So You Want to Read Comics: The Lord of the Rings Edition

One does not simply forget that it’s “So You Want To Read Comics”, a weekly feature where we take a look at a single topic, then offer a pair of comic recommendations for new readers, based on that topic.  This week we’re looking at The Lord of The Rings.

While it was initially met with mixed critical reception after the first volume, J.R.R. Tolkien’s Fellowship of The Ring, was published in 1954, the series would go on to become the gold standard of high fantasy novels. The story of Frodo, Sam, Aragorn, Gandalf, and the others quest to destroy the One Ring and end Sauron, has captivated readers for decades. It’s themes of the corrupting effect of power, freewill versus fate, courage, environmentalism, even its ties to Christianity have been thoroughly examined and debated on by scholars and fans alike.  It’s also been suggested that the success of The Lord of The Rings led to a demand for fantasy that in turn led to a major boom in the genre in the 1960s and 70s.

The Lord of The Rings influence in pop culture is undeniable.  Direct references can be found in music, video games, television shows, and movies, and that’s not even including the massively popular film adaptations from Peter Jackson, which could be a focus of one of these articles themselves. Speaking of adaptations, there have been many, and in many different mediums.  Oddly enough though, adaptations of Tolkien’s work in comic book form are scarce.

So, here are a pair of comic book recommendations that should please fans of The Lord of The Rings.

Bone is the story of three lost cousins who find themselves in a magical valley. Their quest to escape the valley leads them to meet fantastic creatures, evil lords, and take part on various adventures to try and help the residents of the valley. On the surface, Bone may not seem like the sort of thing that would be similar to The Lord of The Rings, at all.  But, while it is silly and cartoonish, there is a real adventure to be had here.  Jeff Smith, the creator of Bone had this to say about his creation: “Bugs Bunny meets The Lord of the Rings. It’s a really long fairy tale with some fantasy elements but a lot of comedy”, and as you go through this long running series (over 1300 pages when collected into one volume) you’ll start to see the deep lore and the large cast of characters that will intertwine to create a true saga, similar to what was seen in Tolkien’s pages. If you need more assurance, this series has received over 20 awards, most of which were Eisner and Harvey awards.

As Bone has the sense of adventure found in The Lord of The Rings,  Ragnarok has the grandiose epic feeling.  Everything in this series is big and bold and carries a certain amount of gravitas to it.  Telling the story of a god who has risen 300 years after Ragnarok, he must travel the land and discover what has happened while he has slept.  What makes this such a fun book to read is that it’s pure fantasy through and through.  There’s trolls, dwarves, elves, gods, magic, the undead, etc.  A lot can be said about the way that Tolkien invented a language for LOTR, or how there’s allusions to WW2 hidden in those pages, and that’s all fine.  But, a good part of the appeal of The Lord of The Rings, is Legolas shooting an orc in the eye, or The Riders of Rohan charging across Pelennor Fields to turn the tide and save Minas Tirith.  That’s what Ragnarok brings to the table, pure fantasy soaked action.  As a final note, this was written by Walt Simonson who is instrumental in shaping the character of Thor in the Marvel Universe, so you know he knows his way around some fantasy.

So what did you think of these recommendations?  Do you have suggestions of your own?  Let us know in the comment section below.