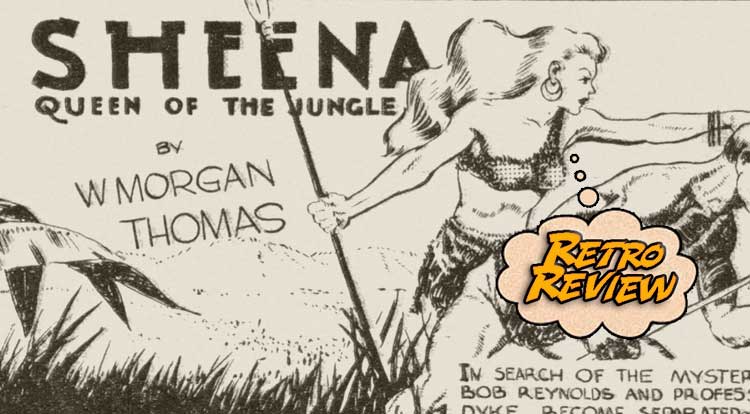 She was the first female to headline her own solo comic, back in the day when jungle heroes were all the rage.  Have you heard about Sheena?  Your Major Spoilers (Retro) Review of Jumbo Comics #1 awaits! Previously in Jumbo Comics:  Originally a pulp publisher, Fiction House’s publisher transitioned to comics in order to try and outlive the end of the pulp trend.  Purchasing material from Syndicated Features Corporation (aka the Eisner and Iger Studio, for its founders Will Eisner and S.M. Iger), they debuted Jumbo Comics, so named for its oversized format, a full two inches taller and four inches wider than the then-standard 8.5 by 10.5 Golden Age size.  This issue features work by Iger, Bob Kane, still a year or so from his big success with Batman, , Hourman and Spectre creator Bernard Baily and a VERY young Jack Kirby, working under the alias Jack Curtiss.  The most popular character, though, makes her United States debut here under Eisner’s own pen, with art by Mort Meskin. The reason that I specify her U.S. debut is that these strips are reprinted from work that Eisner had already sold and seen printed in the UK in the pages of a magazine called Wags.  Amazingly, this isn’t even a reprint of the first chapter of the strip, instead picking up with #11.  Admittedly, it’s the first appearance of the Sheena character, but the pages presented here make it clear that she’s not interested in anything that her American visitors have to say. The whole jungle motif has not aged particularly well, especially as regards the portrayal of African natives, but this strip is at least much less racist than many of the same time period.  Indeed, by the time our protagonist, Bob, sits down with the tribe’s elder statesman (who speaks perfect English, by the way) to find out Sheena’s backstory, it almost feels like we’re hearing real history.

Mort Meskin’s art provides some impressive moments in the five pages of Sheena’s debut, but there isn’t a whole lot of Sheena to be had here.  Moreover, since it’s just five chapters in the middle of the story, it’s hard both to get into and to transition out of the strip, as chapter sixteen literally ends with the elder in mid-sentence.  The comics of 1938 were still in a gestational state, emulating newspaper comic strips and including historical strips, funny animals, puzzles and more.  There’s even a couple of pages of arts and crafts for young model builders. That photorealistic art is courtesy of Les Marshall, a name that I’m unfamiliar with, but one that I’d like to see more of, as his work is pretty beautiful.  Most of the stories in this issue are written by the artist in question, but one of the most interesting is actually written by Alexandre Dumas! Gilberton’s Classic Comics, later known as Classics Illustrated wouldn’t debut until 1941, but this story feels very much like one of those issues, with wonderfully baroque art by Dick Briefer, best known for his work on Prize Comics’ Frankenstein a few years later.  Jumbo Comics #1 is all in black-and-white (possibly due to the expanded size), but fits the old adage, “All in color, for a dime”, as there’s a ton of entertainment to be had within these pages, even if some of it is reprinted, earning 3 out of 5 stars overall.  I had never seen any of Bob Kane’s pre-Batman bigfoot funnybook work before this issue, nor had I seen such early Kirby stuff, so it’s worth checking out.

There's a lot going on in these pages, and the first appearances of Sheena don't really have a whole lot of Sheena in them, but I was still absolutely thrilled to sit and read this 80-year-old chunk of comics history.