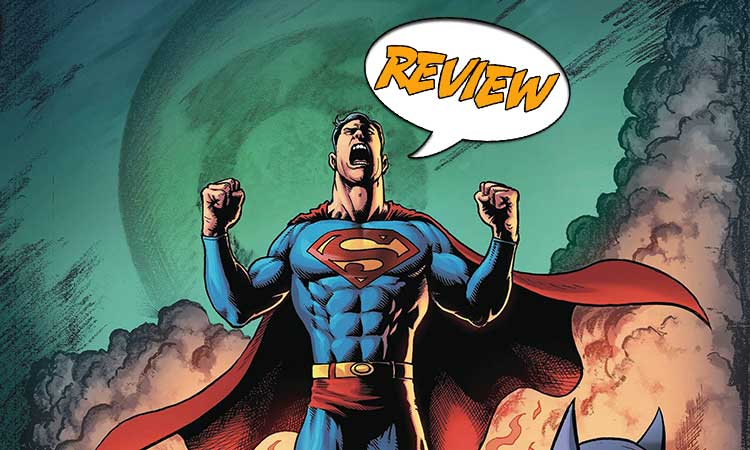 The Justice League is no more.  Yet, a request from an old friend will push the team to see if their relationships truly are beyond repair.  Your Major Spoilers review of Justice League: Last Ride #1 from DC Comics, awaits! Previously in Justice League: Last Ride:  Once the most powerful group in the world, the Justice League was destroyed by tragedy and time, disbanding under a veil of mistrust and anger.

Justice League: Last Ride, starts with Superman coming home to The Fortress of Solitude with Lois Lane.  They talk briefly before he lays down to sleep.  He is later awoken by a nightmare and the sound of the old Justice League alarm going off.  At the Justice League headquarters, Wonder Woman and The Flash are already there when Superman arrives, they are later joined by Batman.  Things quickly become tense between Superman and Batman, when Hal Jordan, Jessica Cruz, and John Stewart arrive with Lobo in captivity.  Hal has called them together because he needs their help protecting Lobo until a trial.  Batman declines, regardless of Hal’s reasoning and pleas.  Back in Gotham, Batman is trying to stop a plot from Mr. Freeze, when Superman arrives, asking to talk with Batman.

In a lot of ways this story has a lot in common with a lot of “the heroes have broken up” type stories.  There’s some mysterious event, everyone has their take on it, and everyone’s role in the event is yet unrevealed.  Where things differ though is that while it’s typical for that breakup to lead to some horrible reality, things seem to be much more subdued in Justice League: Last Ride.  Batman still operates in Gotham, Superman is saving the day in Metropolis.  What comes across here most of all is that whatever happened that resulted in the Justice League disbanding, was only the tipping point and while the world continues to spin, things are decimated on a personal level between these characters.  As an added bonus, there’s a wonderful scene where we see Superman finally have had his fill of Batman’s attitude and need to be in charge.  The one complaint I have with this issue is that while each member of the Justice League gets a little moment in this issue, this is largely the Superman/Batman Show and the rest of the characters feel more like set dressing.  As for the actual plot, it’s fine.  Keeping Lobo safe is a functional enough ignition to the story, also the little hints here and there tying this to somethings from Future State and the ongoing storylines, while not being directly reliant on them was a nice touch.

THE BOTTOM LINE:  A MATURE AND SUBTLE STORY

Justice League: The Last Ride #1 is a mature story and not in the blood and sex sort of way.  The characters are dealing with complex emotions here and the familiar ways these characters used to interact with each other isn’t in effect anymore.  This is a more personal, rather than apocalyptic, version of what happens when superhero teams split up. 4 out of 5 stars.

Justice League: Last Ride #1 manages to put emotions before spectacle to aptly begin a story of what it would be like if The Justice League broke up.