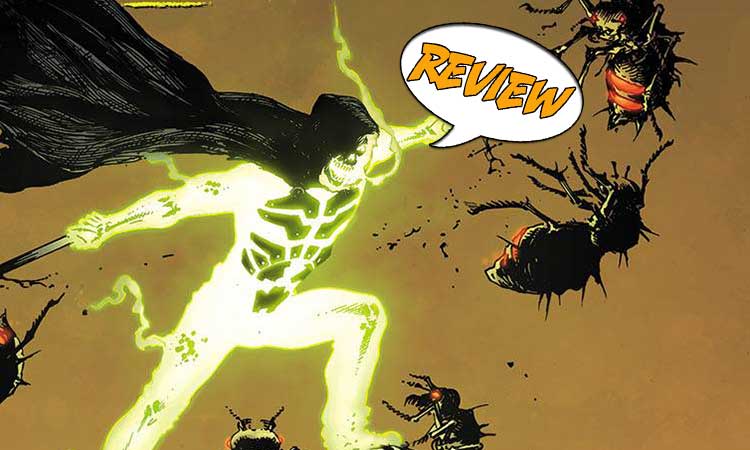 In Geiger #2, the discovery of the nuclear football in the carcass of Air Force One kicks off an escape attempt for a brother and sister from lockdown in Las Vegas.  Can they escape the Nuclear Knights?  Find out in your next mighty Major Spoilers review! Previously in Geiger:  America is nuked (again!) and only an elite (again!) hellbent on oppressing the poor (again) his risen to rule the ruins! (again).  Only the mysterious Meltdown Man can confront the Nuclear Knights of Las Vegas…but can he prevail?

From the off, there’s nothing particularly new in Geiger #2.  The set up is one we’ve seen so many times I could recite them in my sleep (to my wife’s undoubted consternation).  Remnants of the American elite wall themselves off from the primal savages that stalk the shattered, radioactive wastelands, partying hard while clamping down on the poor who serve their every whim.  A plucky band of heroes lurks somewhere in the margins, while the surprise arrival of a holy grail…magical sword…chosen one…oh, wait, the nuclear football (modern times, Rob, modern times!) threatens to upend everything.

Intermingle the action and set up with some flashbacks that gives us a sense of who Tariq Geiger was in the days leading to nuclear Armageddon, and we’ve a comic that can basically tell the tale in its sleep.  It’s well done, there’s no doubt, with some striking artwork, but it’s been well done before.

So what is Geiger #2 about?  The world has gone to hell in a hand basket.  A crank with a feel for the medieval now runs Las Vegas – the gaming tables are open, but the Nuclear Knights are the muscle, and those who survived the bombs now work for an elite enamored of doublets and shiny armor.  Outside, all is a radioactive wasteland, populated by mutant creatures hungry for man flesh.  There are rumors that the last remnants of the American government reside in the NORAD facility inside Cheyenne Mountain, but the travel overland is almost certainly lethal.  Women like Carolina, who remember how things were before the bombs fell, are forced to play the wench for the men in this new realm.  She is also fearful that when her daughter turns sixteen, she will become fair game for the men who claim the title Nuclear Knights.  Which forms the basis for her audacious plan to escape with the recently found Presidential nuclear football…

THIS WORLD’S MAD MAX GLOWS IN THE DARK

There is a pleasingly odd mix of styles in the world of Geiger #2.  From a Las Vegas that is more Arthurian court than Mad Max-style Thunderdome, to the survival of modern day vehicles, to the mutated denizens of the wastelands, artist Gary Frank has a lot to keep him occupied.  His work is the strongest aspect of Geiger #2.  The scenes where our two heroes are chased through the howling wilderness outside Las Vegas by giant, blood hungry ants is terrifying, claustrophobic and enough to give the most big-phobic readers the willies.

Frank’s artwork merits the praise I’ve seen online when reading about this series.  His characters have a presence that comes with the craft and care he brings to the page.  There’s a solidity to them that adds to the menace of men like Hazmat, one of the Nuclear Knights.  And when you see what Geiger did to the King of Las Vegas, you get a sense of the linger pain he feels from the scars he carries.  The setup also gives Frank a chance to spread his wings.  Las Vegas holds multitudes of settings – the survivors have created their own mini cities in their own image.  There’s a cod-medieval version, but there’s also a ‘gangsters and molls’ version of New York in one of the other surviving casinos, where the story fetches up before it concludes.  There’s plenty of variety on offer here in terms of genres, enough to overcome the somewhat strained familiarity of the storyline.

There’s nothing new in Geiger #2.  The apocalyptic setting is nothing new, if you have even a smattering of knowledge about Cold War era fears of the bomb falling.  But what Johns and Franks do is bring a brio to proceedings that helps elevate the story.

Kings of Las Vegas and Godfathers of New York vie for supremacy in an irradiated world. The peasants are thinking of rising, but the man has his boot on their neck. Only a frightened mother and her two children stand in their way, and success can only come from a man who cannot die, who wields the power of the nuclear furnace.