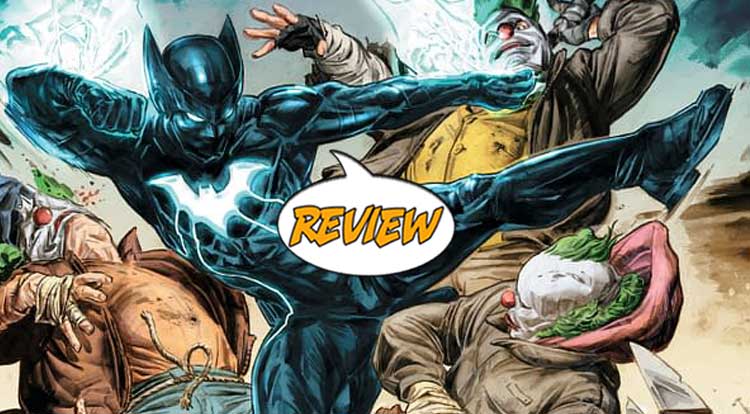 The Next Batman: Second Son #2 Review

Previously in The Next Batman: Second Son:  Tim Fox is struggling to find his place in the family after having been gone so many years…and his younger brother, Luke, won’t let him forget it!  But Tim’s investigation into Arkadine takes a turn as he realizes there’s a connection with the shadowy Simon Saint!  Meanwhile, Batwing is tearing into the underworld in search of Ratcatcher, looking for answers about his sister Tamara’s relapse!

IS THIS NOW?  OR FUTURE STATE?

The Fox family, including Luke/Batwing and Jace/Future State Batman, has been assembled at the beside of sister Tam, poisoned by The Ratcatcher.  The doctors are unsure how to help her, but Tiff Fox/Future Batgirl asks if having the actual toxin would help, which sends Luke out as Batwing to confront the villain.  At the same time, Tim (who goes by Jace) goes to work at FoxTech, their father’s firm.  While Batwing battles through the underworld, Jace secretly does the same, wearing a makeshift mask and following his own code of justice.

Elsewhere in Gotham, Commissioner Renee Montoya works at rebuilding her force, promoting a pair of officers to detective, and informing everyone that, per the mayors orders, ALL masked vigilantes are to be apprehended.  “Even the goods ones,” she snaps, which is probably a questionable call, emphasis on the “Question” part.  Batwing fails to find the cure, leading an angry Tiff to snarl at him and embrace their wayward brother, Jace.  KInda heartbreaking.

Having not read all of Jace’s ‘Future State’ adventures, I wasn’t sure at first when The Next Batman: Second Son #2 takes place, but Montoya and the problems in Gotham seem to imply that it’s contemporary to the main Bat-storyline.  I appreciate Ridley’s complex scripting and the interactions between the Fox siblings in this issue a lot, as a family context is unusual for a Batman-adjacent comic book.  Jace and Luke’s tense relationship is well-written, and it’s nice to see Batwing in action again, especially under Forman’s pen.  The action sequences work well, the quiet family moments work well, and the final panel of two brothers uncomfortably forced to finally look at each other while their sister chooses sides is really well-done.  There’s also a lot of story provided here, with 40 pages equally twice the story for only a dollar more than the average 20-page comic.

BOTTOM LINE: IS HE BATMAN YET?

I’m a little bit puzzled as to where The Next Batman: Second Son #2 is going, as Jace becoming a new Batman while Bruce Wayne is still active seems like a non-starter, but the story is strong and well-plotted, with art that really impresses me throughout, earning 3.5 out of 5 stars overall.  Regardless of when is happens or where it’s going, the journey is working for me as a reader, and I’m going to be back last issue.

Seeing the entire Fox family like this is fascinating, especially in a Bat-context but I'm having some issues knowing where this story takes place. That doesn't make it any less engaging, though.