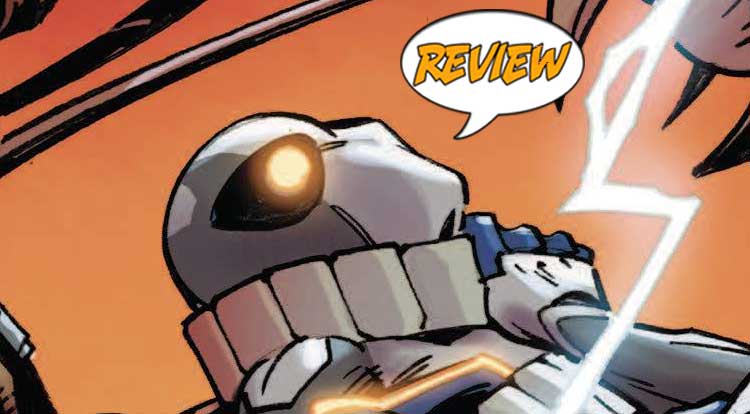 Previously in Amazing Spider-Man:  It is ALL OUT WAR!  All the super crime lords of the Marvel U are competing at the whims of Mayor Wilson Fisk!  Their task? Get the Tablets of Life & Destiny and Death & Entropy.  Also, KILL BOOMERANG!

Sadly, Spider-Man, Randy and Robbie Robertson are caught in the cross-fire!

Amazing Spider-Man #65 begins with Norman Osborn who, with the help of Mayor Wilson Fisk, has enlisted Baron Mordo to try and magically restore his son Harry, now the undead villain Kindred.  It’s not really going well, and Harry reminds Norman that he’s used to his father disappointing and failing him.  Elsewhere, Tombstone and Robbie Robertson follow the trail of their kidnapped children (Randy Robertson and The Beetle, aka Janice Lincoln) to the lair of Madam Masque and the Crime-Master.  Spider-Man, whose new costume provides streaming content for J. Jonah Jameson’s newest venture, arrives, but things get quickly out of hand.  That’s when Beetle’s partners in the villainous combo called The Syndicate (including the female counterparts of Doctor Octopus, Electro, Scorpion and the Trapster, as well as The White Rabbit) bust in and turn the battle into utter chaos.  Elsewhere in the city, Bullseye is seeking to murder Boomerang on the orders of the mayor, making Spidey realize he needs backup of his own: The Avengers!  Or, at least, several of the team’s former members.

NOT MY FAVORITE ART

Vicentini’s art in Amazing Spider-Man #65 has it’s moments (like the last page splash of Wolverine, Luke Cage, Jessica Jones, Iron Fist, Spider-Woman and Hawkeye), but most of the issue has a real problem with its sense of place.  The layouts aren’t really good at conveying a sense of place, and while there are backgrounds, most of the time, they  don’t quite follow.  In addition, the faces throughout this issue are wildly stylized, in way that I don’t enjoy, as though emulating Humberto Ramos, but it feels somehow… off.  Spencer’s plotting in this issue is equally high-velocity, racing through the basic story of “enemies teaming up to save their children”, complicating it with two major villains, the title hero, then six more villains, while three other villains try to fix a fourth villain in a wrap-around sequence and six more heroes teased by the final panel.  The overall effect of the story becomes top-of-the-lungs chaos, and it’s hard to follow any of what’s going on, even if you’ve been following Spider-Man for a while.

BOTTOM LINE: TOO MUCH GOING ON

With so much drama, so many players and so little attention paid to the fundamental elements of establishing story and place, Amazing Spider-Man #65 comes across as a jumbled mess, emulating the classic Spider-Man era of intertwining plots and events but not quite pulling it all together, with art that adds to the feeling of confusion, earning 2 out of 5 stars overall.  I think my confusion and dismay is best explained by pointing out that Spider-Man is wearing his new costume in these pages, but I can’t even tell if I like it, since he only appears about six times for a panel or two.

A chaotic story with overly-stylized and unclear art, featuring a lot of moving parts crashing into one another. Not my favorite Spider-era.