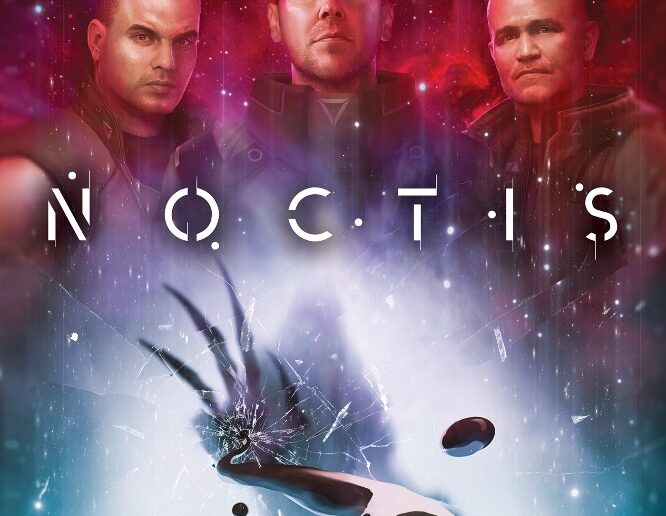 Z2 Comics continues to define the relationship between music and comics; bringing together the comics industry’s best talent with recording acts from around the world! (Gorillaz, Yungblud, Babymetal, Jimmy Eat World) This time the publisher heads down under to bring one of Australia’s biggest musical groups to outer space in Hilltop Hoods Present: Noctis this fall, and available for preorder through Z2 now! WELCOME TO SPACE STATION NOCTIS! Grab your standard issue Normality Normalizer™ and hang on to reality for dear life! Pressure, Suffa & DJ Debris are the Hilltop Hoods and Noctis’ newest inmates—er, recruits—when an anti-space incident infests the base with demonic aliens from another dimension! With the barriers between realities breaking down, it’s up to the Hoods to reverse the bleed before a nightmare god takes hold!

“’Getting to work with Z2 on a comic is the realization of a childhood dream. I grew up reading Deathlok, X-Force, Spawn and a host of others, I never thought I’d be able to play a part in putting a comic together, and Z2 have been so generous with their knowledge, resources and time. As for the writing and illustrations – I’ve been a fan of Tokyo 5 since it’s inception, Nice’s artwork is stunning, and Andrew Archer writes like someone who really understands how comic book universes should be constructed. Teaming them up with comedian Scott Dooley, who injected his sense of humour throughout, has resulted in a really exciting comic that everyone’s really proud of.” –Suffa from Hilltop Hoods

Written in partnership with the artists themselves, who are also characters in the book, Noctis adds writer Scott Dooley (The New Yorker) & Andrew Archer (The Tokyo 5) with art by Jeff Nice (The Tokyo 5), and will be released in comic shops and bookstores everywhere this October, with multiple editions available for preorder through Z2 now, including a deluxe and super deluxe edition, featuring limited edition art prints, vintage trading cards, sticker sheet and more!

When asked to collaborate on a comic with Hilltop Hoods and Z2, Andrew Archer said
“Ever since I saw the Parade of the Dead concert I knew the Hilltop Hoods would be down for anything; in the comic we throw monsters at them, we drown them in interdimensional ectoplasm and we blast them across a planet in a rocket car. They read our story idea, nodded their heads and said “We love it”. It’s been an absolute dream.”

Scott Dooley added “Suf had reached out to see if I’d be interested in helping write a comic and I jumped at the opportunity. The Hoods and I had known Andrew for a few years and really loved what he was doing so being involved was a no-brainer.”