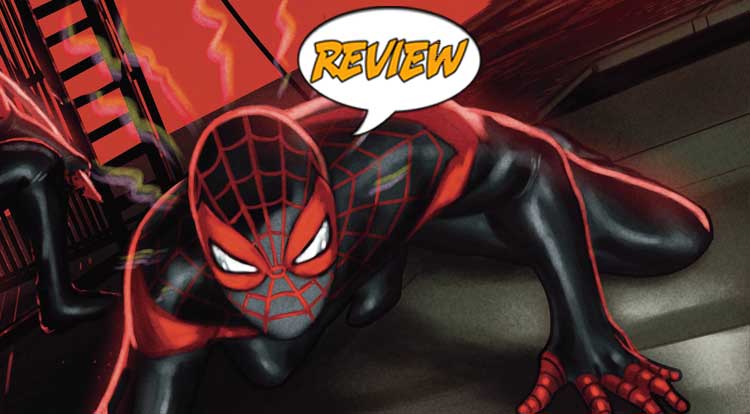 Isn’t it rich?  Are we a pair?  Me here at last on the ground, you in mid-air?  Send in the clones.  Your Major Spoilers review of Miles Morales: Spider-Man #25 from Marvel Comics awaits!

Previously in Miles Morales: Spider-Man: The clones are loose in Brooklyn and Miles’ life is about to get well-and-truly messed up, moreso even than Peter Parker’s was when his clone came back.

This could get messy, folks.

I’M LEERY OF ANYTHING “CLONE” IN THIS CONTEXT

After last issue’s shocking accusations, Miles’s parents are shocked enough to confront him, but he explains that someone has duplicated not only his costume, but his powers, and that he didn’t do any of the things that he’s being accused of.  The situation has him seriously on edge, though, and when Spider-Man finds out that best friend Ganke is dating his own ex-girlfriend, he reacts by grabbing him.  To his credit, Ganke refuses to be cowed, but Miles sets out into the night in emotional turmoil.  He tracks down his imitator, only to be mistaken for the aggressor not only by the scientists fake-Spidey victimized, but by his mentor, Peter Parker!  Miles and Peter briefly battle before setting out, and Miles continually tells Pete that he can’t imagine what it’s like to be cloned and to see your face on a bad guy, only to have Peter continually get interrupted before he can explain.  As the issue ends, Peter is out of action and Miles stands face-to-face with not one, but THREE clones of himself, each with different powers.  Things are about to get stabby for Brooklyn’s Spider-Man.

SPIDER_MAN AND SPIDER-MAN TRACKING DOWN SPIDER-MAN

After the tense lead story, there’s also a cute backup about Miles trying to get his friend Judge a cake for his birthday, which helps to break the tension, in ways both good and bad.  It’s nice to get the release of seeing Spidey against a brand-new villain who isn’t really that much of a threat, but it also lessens the impact of the big shocking last-page reveal.  This issue’s art is lovely in both stories, but I really enjoy the subtlety of Carnero’s facial expressions and the way the characters are placed in the frame.  The terrible moment where Miles grabs Ganke gives us an enraged Miles and shows Ganke going from surprise to determination as he calmly tells the angry superhuman to get his hands off Ganke.  It’s a powerful moment for both young men, and stands out in an issue that has excellent visuals.

In short, despite the provocative arc title, Miles Morales: Spider-Man #25 is a pretty great first chapter, with excellent art throughout and an entertaining story that uses its entire cast well, even if the balance of lead and backup tales is a bit off, earning 3.5 out of 5 stars overall.  If they manage to do multiple issues where Peter doesn’t get to explain why he knows what Miles is going through, it’ll be even better, but so far this Clone Saga is shaping up well, so you don’t have to be scared…  yet.

For me, just the name 'Clone Saga' is troubling, but this issue does well to keep things distinct from previous tales, and makes it clear that Miles is not Peter Parker, plus, the art is top-notch throughout.