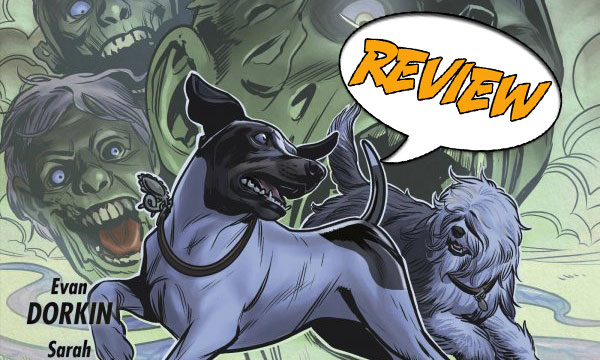 Emrys and Mullins venture deep into the woods where they find tanuki and other mysterious beings who warn them to turn back. Should they? Find out in Beasts of Burden: Occupied Territory #2 from Dark Horse!

Previously in Beasts of Burden: Occupied Territory: As the Wise Dogs settle into Arthur’s study for a bit of rest, Emrys starts telling a tale about him and a Shiba Inu friend he met in Japan in the late 1940’s, after World War II. He travels with his companion at the time, Jonathan Hope, to a military base. Ghost stories abound, and some of the men have been having nightmares. But a couple men have also died. Jonathan and Emrys are taken to see one of the bodies, and its head has been torn off completely. Jonathan starts questioning the local people with no results. Emrys finds a local stray (Mullins) who agrees to be his guide. One evening, Emrys catches a scent he’s been looking for. The trail leads them to a small shrine where three people suddenly collapse, dead. And as they investigate, one of their heads animates and tears itself from its body!

FOLLOWING THE TRAIL IN A FOREIGN LAND

Beasts of Burden: Occupied Territory #2 opens as Mullins is attacked by two of the tentacled heads, one of which gets its tentacles wrapped around him. Emrys grabs him by the collar and shakes the monster off, then casts a fire spell on the two heads. He kills the third one more directly. This was a surprise – he and Jonathan were anticipating something big enough to tear off heads by brute force, not that the heads detached themselves. Mullins is shaken and thinks they should go back to Jonathan. Emrys tells him to go ahead, but he wants to keep following the scent. The plucky Mullins decides to tag.

As they follow the trail, Emrys talks about how he looks for the things anyone might look for when tracking, but as a Wise Dog, his senses are more acute. They talk about their backgrounds. Emrys is from Wales but has lived most of his life in the States. Mullins is from the States and was brought to Japan by a soldier. He had been passed around to other soldiers for a while until he was turned loose.

They hear laughter, and when they look to see what it is, they see two dogs that look just like Emrys, talking about him and laughing about his long fur. Then they turn into two Mullins and make fun of him a little. The two tanuki, for that is what they are, take their own forms and warn the dogs that they don’t know what they’re getting into and they should turn back.

They come to a creek that has blood flowing down it. Following that leads them to a beautifully dressed woman sitting on the bank casually eating a human arm. Her face is covered in blood and her kimono is soaked with it. She sees the dogs and tells then not to worry, and she does not eat animals. Emrys asks her about the heads, and she insists that those are cursed, and they are not hers. After a little more discussion, she vanishes, and the creek vanishes, and only old bones are left behind.

They reach a little village, but it is empty and everyone in it is dead. Suddenly the dogs are surrounded by disembodied heads. Emrys uses all his reserves to blast as many as he can and then collapses. Mullins finds his courage to grab and kill the last one on his own and guards Emrys as he sleeps. After resting, they head further on the trail, meeting other strange beings, all of whom issue sinister warnings to them.

The art of Beasts of Burden: Occupied Territory #2 emphasizes the spookiness of the story while still infusing some humor. I love the scene with the tanuki. When Emrys and Mullins hear them laughing, they stop cold and look astonished. We first see the tanuki with both looking like Emrys, although they look more smiley than he usually does. After they change again, Mullins looks like his eyes are about to pop out of his head. When the tanuki take their own forms, they are not frightened but approach the trespassers boldly to issue their warnings before dashing up a tree and disappearing. It’s funny, but it also feels strange.

The strange beings they run into are legitimately horrifying. The heads with tentacles are seriously creepy. Their teeth are bared and their eyes red. Unlike their original owners, they are all bald. The undulating tentacles give the impression that they move quickly as they scuttle about. These guys are nightmare fodder. Equally horrifying is the woman. She appears so lovely, almost serene by the waterfall that it takes us a moment to realize that she is covered in blood, and her lovely little spot is virtually an abattoir.

BOTTOM LINE: OFF THE BEATEN TRAIL

Beasts of Burden: Occupied Territory #2 gets right outside of the human areas and deep into rural Japan where the local creatures live. It genuinely feels like it is all up to the dogs, and even though everything they run across seems foreign, they are willing to face up to whatever is going on.

Emrys and Mullins are on their own, deep in the woods outside of town.