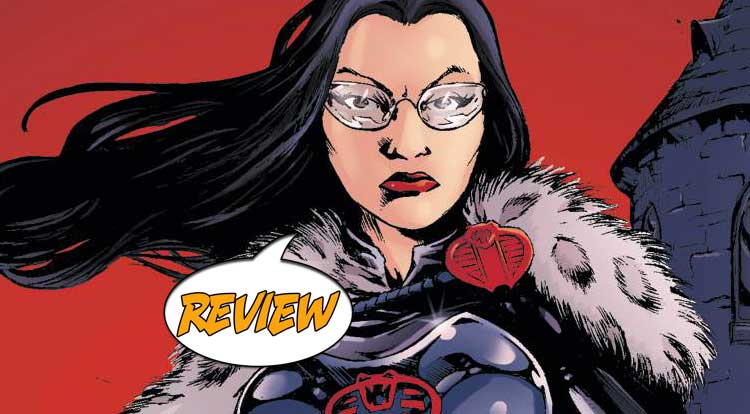 But what’s her latest ploy?

The first five pages of this issue are utterly fascinating, dealing with the problems of landing a plane that has been destroyed by a dogfight.  Even the unflappable Baroness is shaken as their ship crashes and bursts into flame, but a few well-trained Techo-Vipers break them free.  Before she can deal with that trauma, Destro tells her that she needs to deal with a situation in Paris.  When she arrives, she finds that Major Bludd has replaced all the Cobra agents he was sent with, instead substituting his own Foreign Legion buddies.  When Bludd targets the Borovian Prime Minister, she is forced to intervene, chasing him through the streets of Montmartre on a heavily armed Vespa (which is hilarious and cool all at once) and even using his duplicity to convince the Prime Minister to ally with Cobra Commander

INTERESTING, BUT NOT EXACTLY CRUCIAL

On the one hand, I really enjoyed reading this issue, especially since I remember reading the story it’s continuing from back in high school.  On the other hand, as much fun as it is, it’s not really a crucial issue in terms of any ongoing plot.  Seeing The Baroness in action is a a lot of fun, though, especially when she’s dodging missiles and firing a cannon mounted on her tiny little scooter.  The art team does pretty well on the action sequences, especially when it comes to the streets of Paris, but when it comes to facial expressions, they’re a little less effective.  A couple of Baroness close-ups are downright off-putting, and Major Bludd’s face while attacking the Prime Minister is terrifying.  That said, the art works more often than not, and the last couple of pages are quite impressive, as we see our leather-clad protagonist thinking on her feet and putting together the perfect response.

In short, then, G.I. Joe: A Real American Hero #280 does what it promises, delivering on an untold tale that makes for an exciting story that works as a standalone tale but also ties in to existing continuity, and it’s strong enough that even some occasionally wonky art can’ bring it all down, earning 3.5 out of 5 stars overall.  If you’ve never read a G.I. Joe issue, this might make for a decent jumping-on point.

Hama delivers once again on a complex and entertaining issue, with art that has some peculiarities