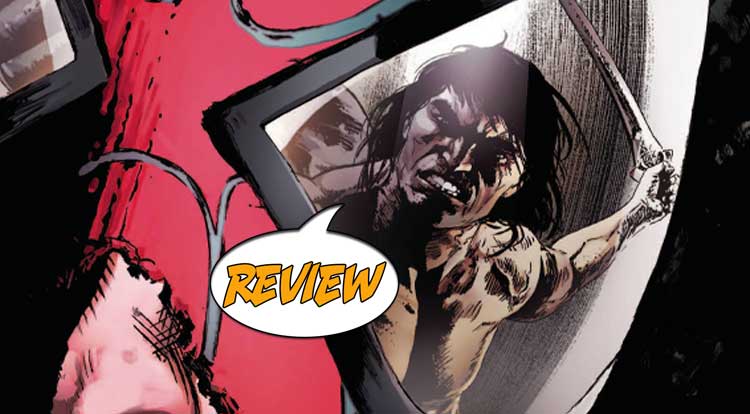 Conan’s on the loose in modern New York City, and Spider-Man’s about to wish he weren’t.  Your Major Spoilers review of Savage Avengers #20 from Marvel Comics awaits! Previously in Savage Avengers: A marvelous Marvel team-up between Conan and the Rhino goes awry when Spider-Man threatens to ruin their good time.

THE BAR WITH NO NAME IS IN PERIL!

After his recent return to New York City (where he has taken over the former headquarters of the Hellfire Club as his personal digs, as well as beating the holy hell out of Knull’s symbiote foot-soldiers, leaving him with a symbiote of his own), Conan is hanging out in the legendary Bar With No Name.  Sadly, the place is about to close, thanks to a lack of funding for bribes and booze.  When Alisha the Bartender tells the Cimmerian of a score that might keeps the lights on, The Rhino overhears and volunteers to help him.  Cue the Ocean’s 11 music!  It’s not exactly the most subtle plan (Rhino smashes the place up, Conan sneaks in and raids the vault), but it’s successful… until Spider-Man arrives to take them down.  Chaos ensues.

If you’re a Conan purist, you might want to tread lightly here.

This issue feels a bit on the wacky side, with Conan demanding that Spidey give him his special wall-crawling suit, even tearing the seat out of the Wall-Crawler’s pants trying to get it.  Spider-Man and Rhino have some fun interactions, and seeing Conan laugh at Spider-Man’s desire to help people is kind of amusing.  (“With great power… comes GREAT REWARDS!” is a very Conan line.)  Still, it’s kind of fast and furious and never quite fills in the blanks, with a shirtless Conan taking advantage of Spider-Man’s desire to help people to get away with the money feels like it shouldn’t have worked, but…  it’s Conan’s book.  Zircher’s works reminds me a bit of Mike Deodato’s in these pages, and his New York City feels very real and very much a living thing.  He also draws Spider-Man with his underarm webs, which is always a cue to quality Spider-adventure in my book.  If anything, my biggest complaint about this issue is the complaint I’ve had about this title since it started: How in the world is this any kind of Avengers book?

Even with that title complaint and the breakneck pace of this issue’s story, Savage Avengers #20 has its moments and the comedy parts don’t completely overwhelm the fact that it’s a Conan The Barbarian story, making for an odd-but-entertaining chunk of comics that earns 3 out of 5 stars overall.  If upcoming issues follow up on Spider-Man’s vow to avenge his pants in and around the ongoing Kulan Gath storyline, I’ll be happy.

It's a quick read and glosses over a few things to get to the funny parts, but it makes for an okay 'Conan-lost-in-the-21st-century' story. Back in the day, this would have been an issue of 'What If?'