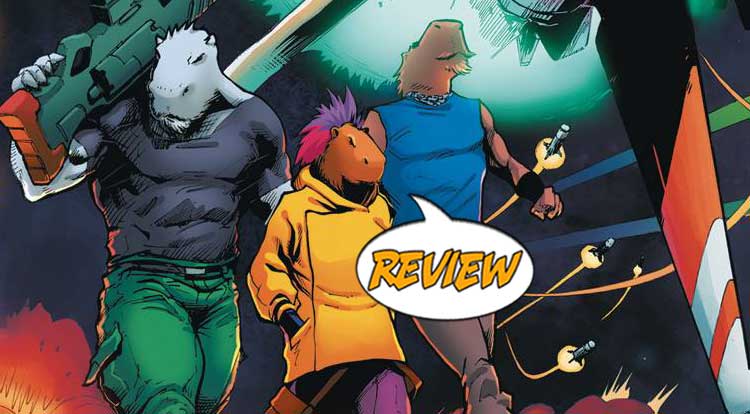 A family of capybaras and their gecko mentor find a galactic bounty on their heads…  The real question is: Why?  Your Major Spoilers review of Galactic Rodents of Mayhem #1 from Scout Comics awaits! Previously in Galactic Rodents of Mayhem:  A group of capybara galactic bounty hunters (Bash, Ripple, Mona-Lisa, and their father figure, a gunslinging gecko named Gan-Gon) find themselves on the run when a huge interstellar bounty is placed on their heads!  Facing everything from viper snipers, armed armadas, and even a hulking robo-shark, can the heroic crew of capybaras come together as a family before it’s too late?

The story begins with a flashback (helpfully dated as “Then”), wherein we see a group of mercenaries seeking out a particular lab rat.  (Literally.)  Things go bad, as they find a capybara protecting her three kids instead, and things quickly get out of hand as she attacks a shark-man who then murders her in front of her children.  His partner, a gecko named Gan-Gon-, kills the shark and their other partner, mournfully explaining to the shell-shocked children that the whole thing is just one big misunderstanding.  Cut to the present, where Gan-Gon explains to the now-grown capybara trio that it’s time to flee their longtime home of Shadow-Gate for the Utopian world of Todo.  Sadly, the connection who was supposed to help them get their has turned on them for the bounty, and utter chaos erupts as several other groups converge on the Galactic Rodents to bring them all in and get rich.

And then, the book just ends.  The last panel features Gan-Gon and the GROM leaping into action, followed by a page that promises the rest of the story will be available in a Nonstop Graphic novel, which…  I’m a little bit irked about.  I’m fine with a book that serves as a preview or teaser for a larger story, but paying full cover price for one that is never identified as such is upsetting to me as a reader.  On the plus side, this issue’s art is quite good, as Navas does a wonderful job with the various anthropomorphic creatures of this universe, from mice to sharks to turtle ninjas.  That last one, by the way, is not joke, as a quartet of terrapin shinobi pop up, making it clear that Deltrez is fully aware that they’re treading the turf of Eastman and Laird.  It could have been a moment that felt strange or smarmy, but instead, it works as a subtle tribute in the middle of a larger story.

If I had my way, Galactic Rodents of Mayhem #1 would have been more clearly labeled as the prequel to a graphic novel, but the strong art and the cleverness with which it posits it’s world of alien animal-folk is charismatic and fun, earning 3.5 out of 5 stars overall.  I wouldn’t mind seeking out more adventures of Gigi, Bash, Ripple and Mona-Lisa, as there aren’t a lot of science fiction western funny animal titles to be had in today’s comic book market.

The art is pretty stellar, but the story ends up being little more than a trailer to get us to check out the graphic novel. It's not a bad trailer, though.