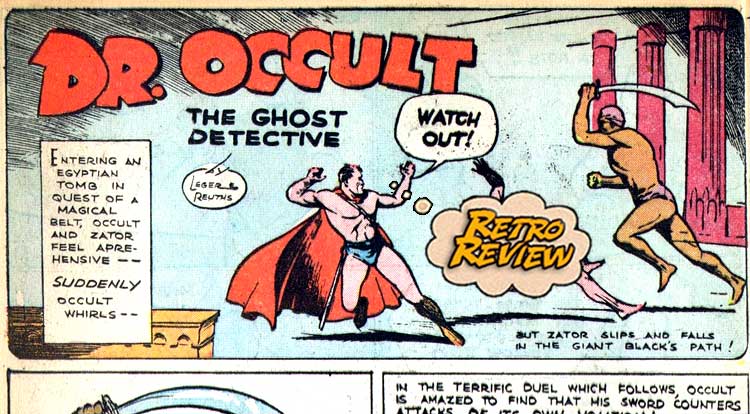 You may know Doctor Occult from ‘The Books of Magic’, but did you know he predates Superman?  Or that he did part of it wearing a cape?  Your Major Spoilers (Retro) Review of More Fun Comics #14 awaits! Previously in More Fun Comics: Sixty-eight pages for a dime!  Not so long ago, we looked at the book generally considered to be the first actual comic book, and by 1936, not a lot had changed.  Comic books were still assembled in emulation of the Sunday funnies, with comedy strips mixing with spy stories and cowboy heroes bumping elbows with bigfoot funnies animals.  Witness the wholesome college sports antics of Pep Morgan, (no relation to Rex). Each strip in this issue is a two-pager, which means a LOT of story bang for your tenth of a buck, with sailor Spike Spalding, Sandra of the Secret Service and more adding chapters to their ongoing tales.  As for Doctor Occult, he started appearing in ‘More Fun’ before it had that name, back in issue #6 of what was then called ‘New Fun Comics.’  Of course, for the real weirdness of this issue, we actually have to go to a Centaur Comics Publication that came out in the spring of 1936.  This issue’s story is a bit of an anomaly, though, as it’s explicitly part TWO. Doctor Occult and his associate Zakor find themselves saved from a horde of evil creatures under the command of a creature called Koth.  Of course, if you’re looking for part ONE of the story, you won’t find it in More Fun #13.  You won’t even find it in a National Publications title.  No, friends, the first part of this story was printed in a Centaur Comics, Comics magazine #1, where it appeared under the title of Doctor Mystic.  It’s not clear why this happened, though historian Don Markstein pointed out that this issue’s editor, Malcolm Wheeler-Nicholson, wasn’t always the best at paying on time.  Regardless, this issue also contains an important moment for DC and Siegel and Shuster: A red-and-blue costumed hero in a cape! A full two years before the debut of Superman, Doctor Occult and Zator set out in matching ceremonial garb to defeat their wicked foe.  And I don’t know about you guys, but the woman in that last panel seems to be fully nude.  Given that Doctor Occult could fly and had superhuman strength, it’s only a short hop to see where Joe and Jerry’s most popular character might have germinated.  The battle with Koth lasts until #17, albeit only two pages at a time, and Dr. Occult disappears from comics with #32, in June 1938.  If you know that date, you might realize why Siegel and Shuster let the good Doctor go.

Sharp-eyed Spoilerites probably noticed that the future Superman creators used pseudonyms (Leger & Reuths, which seems like an anagram, but lacks a few letters) on Doctor Occult.  In this same issue, they deliver a two-page Sandy Kean police strip under their real names. As a fan of goofy old comic stories, I gotta tell ya: The Purple Tiger is a KILLER name.  He’s also just a plain ol’ killer, but he’s no match for Sandy Kean’s mean right hook. With the entire issue consisting of one and two-page stories, More Fun Comics #14 is packed to the gills with comic entertainment from a time where everything was new and exciting and even the most primitive strips (notice that there aren’t a lot of backgrounds to be seen either of Joe’s stories) have a wonderful charm to them, earning 3 out of 5 stars overall.  Even my somewhat cynical teenager found these pages to be fascinating and full of wonder, especially the hand-lettering, and if you get a chance to read it, I highly recommend checking this book out.

It's a LOT of comics, and the quality varies, but it's truly exciting for me as a comics nerd to see the pieces of Superman being slowly assembled in these pages. Also, maybe I'm crazy, but I think that Dr. Occult isn't his real name.