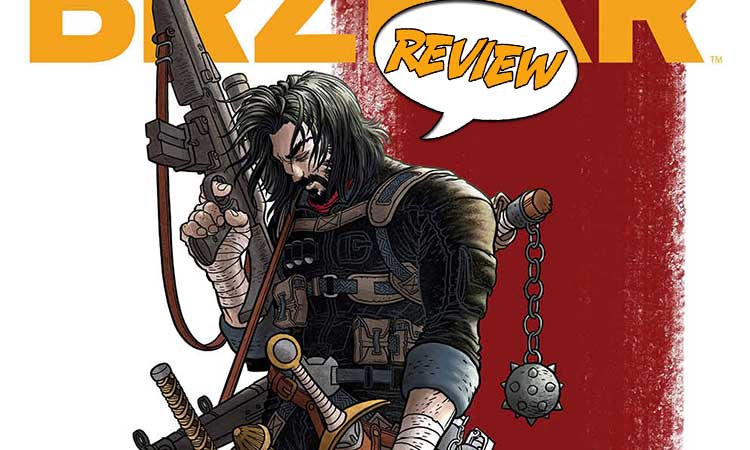 In BRZRKR #2, the Brzrkr tells his psychologist the tale of his origin – born of the Gods to fight endlessly across human history!  What do we learn of his blood soaked origins?  Find out in your next mighty Major Spoilers review! MY LOVE FOR YOU IS LIKE A TRUCK, BERSERKER

BRZRKR #2 is in most respects the origin issue for our titular character (charmingly referred to as ‘B’ by his therapist – yes, even immortals have therapists nowadays).  It is, by any definition, a bog standard origin, even if the details are (to my mind at least) inadvertently hilarious.

80,000 year old Brzrkr’s current employer is the US military.  For their buck, they get an awful lot of bang, in the shape of an unkillable killing machine who regenerates lost body parts while slaughtering a huge amount of people, all in the name of apple pie and good old American values.  The only problem is that Brzrkr wants to die, and really, after all that killing, who wouldn’t want to off themselves just to have some respite from it all?

BRZRKR #2 is so earnest it almost passes for a comedy.  Brzrkr’s mom and dad are really keen to find a way to protect their small village from the depredations of outlaw bandits (has anyone thought of moving, or, you know, building a wall?)  Of course, Momma Brzrkr is the smarter of the pair, so she makes a neat concoction of forest shrooms that basically blow the top of her skull off (not really, but almost) to help find something to stop the attackers.

What actually happens is that the power of the universe, embodied in the form of cosmic lightning, strikes her during what must’ve been the trippiest shroom powered trip ever (to that point at least, what you did during your college days is entirely your thing, so I won’t judge you, man).  It’s so trippy, that we actually see the cosmic lighting light up Momma Brzrkr’s reproductive organs, such is its power (go on, check the panel of art – her cervix is lit up like a goddamned Christmas tree, honest to …well…God).

From this spectacular event, Brzrkr is born.  He has to be trained to be a killer, but when he does lash out, oh boy, there’s lights of exploding bodies to fill those panels, that’s for sure.

All the above is to say that while I think the creative team (hi Keanu!) of BRZRKR #2 really wanted to make a serious, interesting take on the eternal warrior trope in fantasy, for me at least, the result was more amusing than compelling.  Sure, the storyline is hackneyed – emo immortal just wants to rest, forever – but it is a fun diversion for the length of the issue.  Yes, the violence is way over the top, but isn’t the set up way over the top?  I am a bit worried that the readers who came on board with the first issue may start to get bored of all the uber violence – the trick here will be if Matt Kindt and our good friend Keanu can turn the story away from its reliance on people dying in interesting ways, and to a deeper examination of Brzrkr and the life he’s led.

On the art side, artist Ron Garney wears his influences on his sleeve.  There’s a bit of Klaus Janson in his work, as well as Frank Miller, in the robust, square jawed men he draws.  There’s even what I think to be a homage to a well known Frank Frazetta Conan cover, with an attacker on horseback wielding a weapon.  All this is to say that Garney is very, very good at portraying the virile men and women who populate BRZRKR #2, inflicting heinous violence and death with a wild delight.  There’s a kinetic energy to his fight scenes, particularly those involving many combatants, which he intersperses with scenes in the current day, as Brzrkr begins to recover some lost memories.

BRZRKR #2 doesn’t reinvent the wheel, so much as roll out some that we’ve seen many, many times before.  It is a good, entertaining issue, filled with great artwork and an interesting (but again, we’ve seen similar before in those Greek myths where Zeus is the Harvey Weinstein of the Gods) origin story for our ‘hero’.

Heavy action scenes, a same same origin story, all point to a series in need of ensuring every issue doesn’t become a retreat of what has gone before. There’s enough going on, however, to keep readers coming back for more. But less of the gynecological fireworks, please.