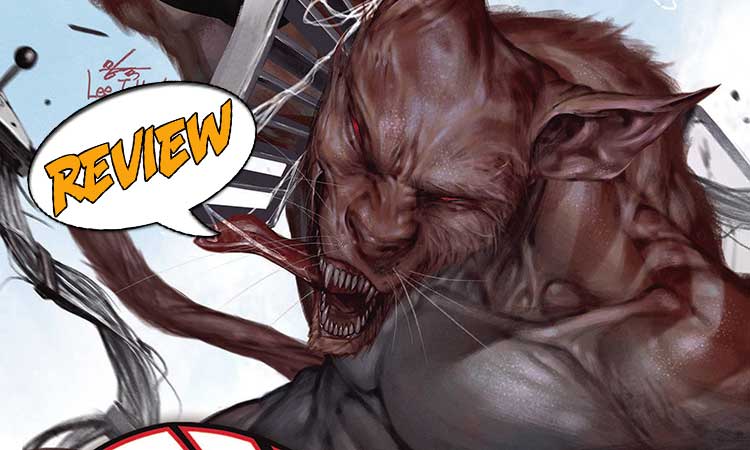 Silk is on the trail of whatever has been killing the gangs in her neighborhood, but she couldn’t begin to prepare for what she finds.  Your Major Spoilers review of Silk #2, awaits!

Previously in Silk: Someone is killing gangsters in Queens, leaving behind a trail of blood and fur.  Now Silk has to protect these low-level criminals from a bigger, nastier villain.

ENEMY OF MY ENEMY

Silk #2 opens up with Cindy Moon at work when she’s informed that her coworker is on his way to investigate the hideout of a gang.  She tails him as Silk to an arcade.  There they witness a large cat monster confront the gang and order that they either work with them or they’ll die.  A fight breaks out with Silk in the middle of it all.  She manages to get herself and her co-worker out of there and back to their office.  Later on Silk’s coworker tells J. Jonah Jameson what he learned and JJ suggests that they reach out to the surviving gangs and talk them into a peace pact in order to survive. Silk tries her best to keep the peace as the meeting takes place. The next day Cindy goes to see her therapist and is surprised to see it’s someone new, who has their own secrets.

Of all the members of the Spider family, Silk has received some of the least attention, the result is that it’s been difficult to determine who exactly she’s supposed to appeal to.  In this issue though, that starts to become more clear.  In this issue we see Cindy juggle her hero identity with her young professional life, with her home life, while also going to therapy and dodging a clingy mother.  This gives her a decidedly Millennial feel.  Now, while it’s nice to see Cindy finding a tone,  this issue is strangely paced with one of the least surprising reveals at the end.  For example, one of the major plot points in this issue is this proposed peace treaty meeting between the gangs.  This is wrapped up in a two page spread, which is done in a genuinely unique way, but leaves things very unclear as to what, if any, conclusions are reached, but then uses up a few pages at the end to narratively recap everything else that’s happened in both the first and this current issue.  At the end, this works better as a quirky character focused story rather than an action oriented, crime fighting one.

Silk #2 manages to be beneficial to the character as a whole in helping define their place in the Marvel universe as well as the company’s lineup of books.  At the same time, it’s not a well plotted out book and suffers from some pacing issues and predictable events. Silk #2 earns 3 out of 5 stars.

Silk #2 doesn’t do a good job making it clear what’s happening in it’s plot and not in a fun, mysterious way. On the other hand, the character of Silk gets some well deserved definition and starts to establish their unique voice.