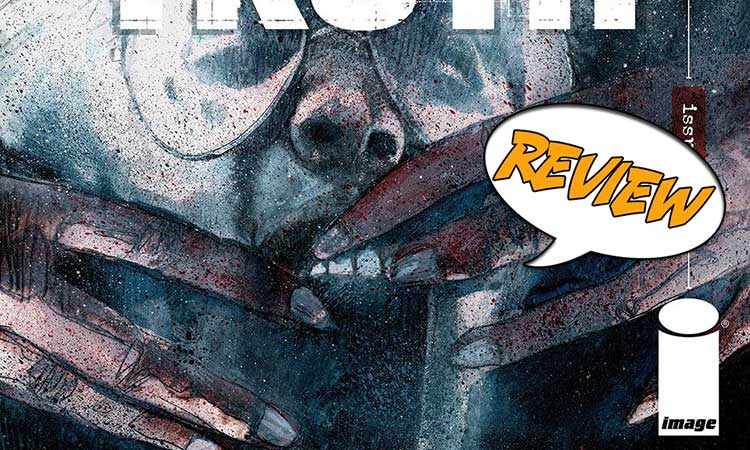 In Department of Truth #8, Cole and Ruby travel to Denver International Airport, in an effort to understand how to beat back the efforts of the Black Hats to warp reality.  Do they succeed?  Find out in your next mighty Major Spoilers review!

Previously in Department of Truth:  Cole Turner saw an ice wall at the South Pole that seemed to prove the Earth was flat.  When the ringleaders were shot dead, he found himself within the embrace of the Department of Truth, an organization dedicated to preserving the true truth about reality.  But who is the final arbiter of what is actually true?  Lee Harvey Oswald, it seems, who just happens to be alive and heads the Department.  And then things got really weird.

LET ME TELL YOU A CRAZY STORY

Department of Truth #8 grabs the reader by the throat and never lets up.  I’d especially like to note the design work by Dylan Todd, which is spectacular – take note of the reversed typewritten notes that form the panels in the early pages, all the way to the reproduction of verses from the Book of Revelation.

Along the way, writer James Tynion IV and artist Martin Simmonds (whose return in this issue is another triumph) expand and deepen the mythos surrounding the Department of Truth, while deepening the confusion of the main character, Cole Turner.

The Department of Truth attempts to hold back the tide of belief in conspiracy theories, to preserve what they regard as the truth and safeguard American democracy against the menace of the Black Hats.  But when the insane theories of the conspiracists actually manifest and warp reality, what is the Department of Truth to do?

THE QUEEN OF ENGLAND IS A LIZARD!

While Department of Truth #8 doesn’t answer the above question, it does go on a merry gallop through one of the great conspiracy theories of all time – the supposed true nature of Denver International Airport (go search Google for some of the most insane theorizing about what the airport is for, and what is meant to be happening there – I’m happy to wait).

Crazy, right?  But perfect fodder for this stellar issue of a stellar series.  James Tynion clearly things none of this nonsense is real, but the degree of writing talent he exhibits makes the nonsense compellingly real.  Sure, we all know the layout of the runways don’t really form a swastika.  Or that lizard men have opened up shop in the buried corridors and rooms underneath the airport in readiness to emerge and proclaim a New World Order (though wouldn’t that be fun?).  Tynion writes all this absolutely straight, in tight prose, all conveyed with intense seriousness by Coles’ partner in fighting this nonsense, Ruby (and her boss is Lee Harvey Oswald – get the reference?).

When the writer is on song like this, heaven help the artist.  Well of course, Martin Simmonds needs no help whatsoever.  Department of Truth #8 presents a world where the lines between reality and fiction are often blurred, if not entirely non-existent.  So it makes sense that the artwork is similarly diffident about where the linework ends, and the coloring begins.  Nothing is ever certain in the series, and the artwork exemplifies that, with lots of splatter, washed out colors and line work that makes the word ‘hesitant’ seem over emphasized.  Nothing is what it seems in this series, and the artwork in Department of Truth #8 underpins that essential truth.

There’s very little more that can be said about Department of Truth #8 and the series as a whole, other than to go out in a buying frenzy and snap the whole lot up.  It’s all nonsense, but it is compelling composed nonsense, told with one of the best creative duos in the business.  You don’t have to believe me, just go read the issue!

Cole Turner is about to be shown how the Department of Truth turns back the insanity of the Black Hats. But before that, he is taken on a tour of one of the landmark sites of conspiracy theories. Department of Truth #8 is an entertaining venture into some very dark areas indeed.