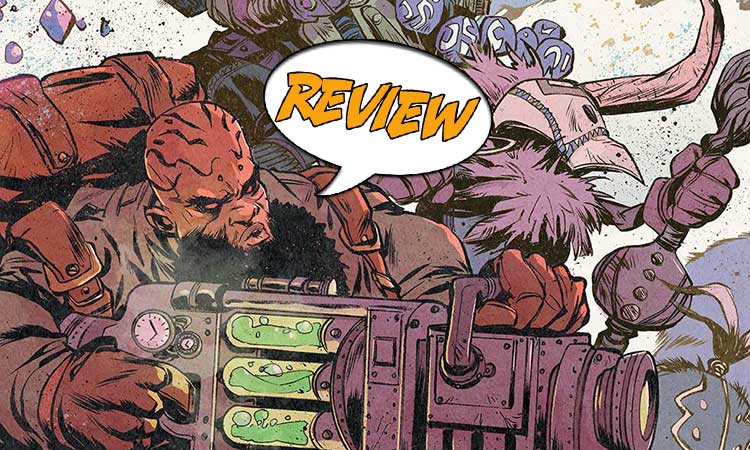 The Sangeryes can barely hold their own against Jinoo and Inzondo. But what if they have been going about this fight all wrong? Find out more in Bitter Root #12 from Image Comics! Previously in Bitter Root: Adro has slipped away, but is not dead. Harlem is home to several Inzondo, monsters born of grief. The serum the Sangeryes make helps them control their monstrous side, as do music and alcohol. A prime example of this is Berg. All this root work keeps Ma Etta busy and she has taken on Elijah, the young policeman, as an apprentice. Blink and Nora try to come to terms with their relationship as mother and daughter after Nora’s long absence. Enoch works with his brother Charlie, back from Barzakh, along with people of other cultural backgrounds to figure out how to close the gateways. Cullen travels with Ford, who carries the news of Johnnie-Ray’s death to his family. Cullen doesn’t go into the house, but goes into the woods, and finds a monstrous tree that attacks him!

I love the opening juxtaposition in Bitter Root #12 which shows Cullen entangled in the tree while the dialogue is Johnnie-Ray’s father asking about what is wrong with the world. He talks about a radio preacher who says they are in the end times and asks whether Johnnie-Ray’s death is related to this. Ford starts to answer, but before he can get far, Johnnie-Ray’s mother transforms into a Jinoo, accuses him of murdering her son, and attacks. This fight is shown in tandem with Cullen’s struggle against the tree. The little creatures that hang around with them hand him a blade he uses to slash viney tentacles.

In Harlem, Ma Etta is setting up to do something with the family, or as much of the family as is around. We catch some wonderful glimpses into their lives, such as Berg in the family library with its collection of works by Black authors. Blink works with Charlie on his legs and demands to know more about Barzakh.

Now this is fascinating, and I will never do this the justice that the actual book does with its brilliant narration. Barzakh is a different reality, and time flows differently there. There was a small group of humans surviving there from different cultures and different eras. While all those cultures have myths of a place that separates the living from the underworld, Charlie realizes that all those myths are wrong. Another important thing to note, living in Barzakh can bring out the best or the worst of people. He fears that in Cullen, it has brought out the worst. He also confirms that the man who found him and went with him to Adro’s castle was Dr. Sylvester.

Cullen continues his fight against the tree, slashing it until he is free from the vines and it has stopped moving. When he goes back to get Ford, he finds a scene of unexpected carnage. Johnnie-Ray’s parents are both dead. And it wasn’t Ford who killed them. Johnnie-Ray’s sister killed her own mother. Ford tries to reassure her that it was no longer the mother she had always known, but she tells him that now she is alone – no one is left. This is very powerful symbolism.

In Harlem, Blink feels they shouldn’t have a get-together without everyone there. Ma Etta is so wise. She knows they cannot get everyone, so they’re going to make do with everyone who is here at this time. Her theme this issue is all about the here and now, not living in the past or worrying about the future but doing the best you can in your life right now. And right now, everyone they can is gathering around her table.

Enoch is expected, but he is not there. He is working through books and thinks he has found something. It is as though the thing he has been looking for has been split into pieces, and those pieces are in completely different books. His revelation, as he dashes out the door, is that they, all of them, have been fighting the wrong fight.

Bitter Root #12 is not without hope, but it is a dark book. Right from the outset, the image of the tree is horrifying. It is huge and gnarled and has a single giant eye. But even more chilling and symbolic are the many, many bodies that appear to be hanging from its branches. The smaller, toothy vine monsters just provide more nightmare fuel. Cullen leaps into this fight with great energy and we can see how much he has changed from the Cullen at the start of the book who struggled to take on a single Jinoo under Berg’s supervision.

Family is such a central theme in this issue. We see the closeness of the Sangerye family even as we see the divisions in it. Johnnie-Ray’s sister loses her family traumatically, but she has also taken a stand against the racism that had been part of it in a parallel with her brother. The small family dinner Ma Etta puts on is warm, and she presides with tremendous dignity. And in Enoch’s studies, we see his revelation that whatever is going on, it isn’t just his family who is in it, it is all the families. These families may represent different cultures in New York at the time, but they are a microcosm of the world.

Bitter Root #12 leads us to a deeper understanding of Barzakh and the connections that it has across many cultures. And, thanks to time and further studies, Enoch may have made a breakthrough, and I am dying to find out what it could be.

Many changes come to the Sangerye family, including a passing of the torch.