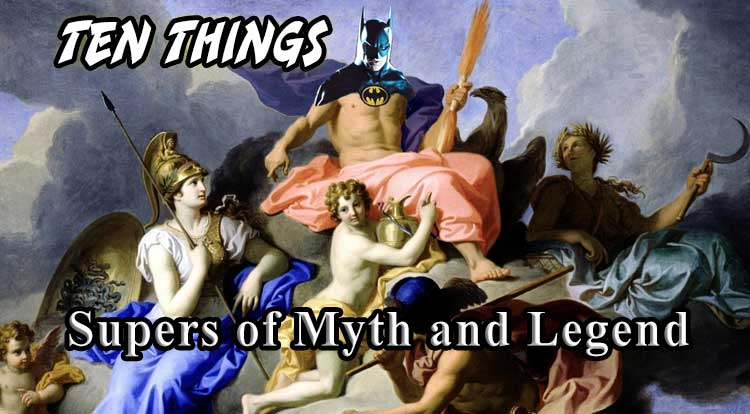 Ten Supers of Myth and Legend

In times of old, when knights were bold and something something Burma Shave…  Myths, legends and history are fertile grounds for growing our favorite supers.  Welcome to Ten Things: Ten Supers of Myth and Legend!

The least-seen member of Freedom Force (a super-team led by The Mighty Isis, featuring Merlin, Hercules and a young man called Super Samurai), Sinbad was not merely a legendary sailor, but had the power of hydrokinesis.  He is hinted (though never 100% confirmed) to be the actual Sindibādu al-Baḥriyy, hero of Middle-Eastern story cycles.  During his seven legendary voyages, Sinbad (sometimes spelled Sindbad) encountered monsters and miracles, and his stories were eventually added to the text of ‘One Thousand and One Nights.’

He killed it on ‘Star Search.’ Able to absorb and store energy for later use, Geonell Salvador is a member of Raja Team One, a Filipino super-team that appeared in Kidlat (“Lightning”) Komiks.  His name comes from a legendary character of the Ilocos region, a folk hero who was born so smart that he could speak as an infant, and chose his own name while still a child.  His first quest began when he was only nine months old and encompasses a long story cycle that shows influence of both Western Roman Catholicism and Hindu culture.

I’m a huge fan of the dark pink color of his suit. Hailing from Earth-7 in the Multiversity-era DC Universe, where everyone is a parallel of a Marvel Comics hero, Golem (real name unrevealed, but likely rhymes with “Grimm”) was a member of a team called The Future Family.  His friend, Frank Future, led the team until their world was destroyed in ‘Multiversity’.  His name comes from the anthropomorphic clay man of Jewish folklore, a recurring trope that teaches lessons of hope, despair, hubris and more, depending on the time and the tellers.  The choice of a Jewish legend to represent The Thing seems appropriate, as he was officially retconned as being Jewish in the early 2000s. Speaking of Jewish folklore, Judas Maccabæus was an actual historical figure, a priest who led a revolt against an oppressive empire circa 167 BCE.  In the world of G-Man Comics, he is a superhuman figure, thanks to his possession of a literal Hammer of God, making him a sorta/kinda Thor analogue.  The real Judah Maccabee likely got his name from either his ferocity in battle or for fighting with a (presumably non-divine) hammer in real life.  There’s also a theory that it’s an acronym for ‘Mi kamokha ba’elim Adonai’, or “Who among the gods is like you, O Adonai?”, his reputed battle cry. There are a lotta Herculeses in the history of comics, from the one who joined the Avengers, to the one who victimized Wonder Woman’s mother, to the one that Kid Eternity called upon once or twice.  MLJ Comics’ version was one of the ones reputed to be that actual figure of myth, the hero Alkeides, who performed 12 Labors and was bitterly hated by his step-mother and namesake, Hera.  (Remember: Hercules is the romanized version of his divine name, Heracles.)  This Hercules made five appearances circa 1940, in the pages of Blue Ribbon Comics.

In true Greek mythological fashion, his brother Perseus is also his great-grandfather. A member of a team loosely (and never, to my memory, officially) known as the Tribe, Hannibal is a robot (or possibly an android?) built and rebuilt by science genius and team ramrod, Blind Spot.  The long-term plan was for the team to be a sprawling cultural movement with hundreds of members, but only three issues were ever published.  He was named for the Carthaginian general renowned for his tactical prowess on the battlefield.  Another real world figure, the historical Hannibal fought many battles around the globe, eventually dying from either poisoning or a simple infection in a minor wound, accounts vary. Known in some tellings as Malikat Saba, Makeda is the literal proverbial Queen of Sheba, once the ruler of what is now Ethopia.  In the world of T.A.S.K. (Tactical Allied Superhuman Kommand), she is immortal thanks to the gem in her forehead, which also gives her superhuman strength, stamina, reflexes and more.  She is also able to heal from even the most terrible injuries, to the point that she can regrow a lost limb.  Her centuries of combat experience have put her in the center of many of history’s most notable conflicts, and has spent much of the 20th and 21st centuries finding and assembling a super-team called The First World. One of the various clients of Doctor Blink, superhero shrink, little is known of First City’s most level-headed protector.  Her mythological counterpart (and possible in-universe tutelary deity) is Athene, sometimes known as Pallas Athena, goddess of warfare, wisdom and arts & crafts.  Given Freud’s odd predilection for Athena as unapproachable and repellent of sexual desire due to embodying (and I quote) “the terrifying genitals of the Mother”, it’s interesting that she appears in a book about a psychiatrist. A master of information gathering and spy-craft, Mata Hari sought to join the futuristic League of Infinity, alongside Kid Supreme and the heroes of many worlds and times, alongside Wilhelm Reich, Chu-Ko Liang and the mysterious Pilot X-U.  Her namesake is another real-world figure, Margaretha Geertruida MacLeod, a Dutch sex worker of the early 20th century who was accused and executed for spycraft during WWI.  According to one observer, the real Mata Hari refused a blindfold and blew a kiss to her executioners before they opened fire on her. Once the boy sidekick of the legendary hero Knight Watchman, Jerry Randall grew up to protect the city as a teenager, and eventually  took on his own dark avenger identity to replace his elderly mentor.  Of course, the mythology of Knight Watchman as unstoppable force of nature also needed supporting, so he spends his nights wearing the shield and his days as Galahad, making for a busy life for Jerry.  He takes his name from the knight of King Arthur’s Round Table, sometimes known as Galeas or Galath.  Son of Sir Lancelot, Galahad was considered the purest of the knights, and could heal the sick and repel the undead, which I’m pretty sure makes him the first D&D Paladin.

This week’s topic, Ten Supers of Myth and Legend, is all me, but feel free to follow along @MightyKingCobra for more Ten Things madness on Twitter!  Or, you can check out the full Twitter archive here!  As with any set of like items, these aren’t meant to be hard and fast or absolutely complete, if only because one more guy named Thor won’t hurt anything at this point.  Either way, the comments section is Below for just such an emergency, but, as always: Please, no wagering!