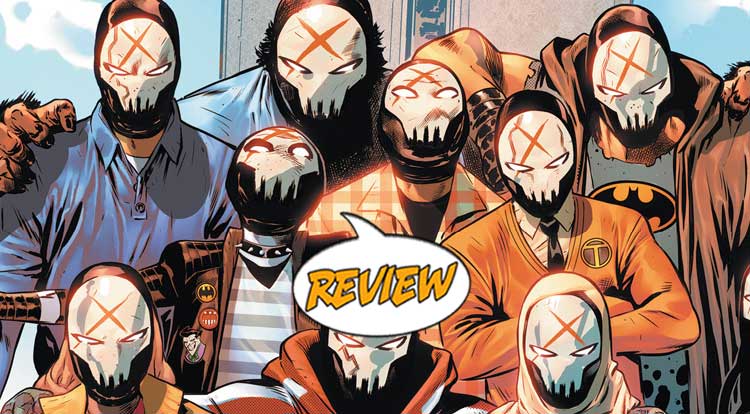 Previously in Teen Titans Academy:  The questions mount around the new school formed by the original New Teen Titans: What’s going on with Billy Batson’s access to the powers of Shazam, what dark secret is Raven’s new pupil Dane hiding, and who’s masquerading as the new Red X?

Teen Titans Academy #2 begins with what looks like a murder, as new speedster Bolt (the super-speedster with the prosthetic leg-blades) is nearly killed by Red X, but calls him out on his claims of being three moves ahead at all times.  Cut to utter chaos, as the thirty or so students, and the six instructors all engage in “Field Day”, which seems to be nothing be throwing their powers around.  We get a little insight into Matt Price, the weird kid who spends all his time play Arimaa against himself with a modified chess set.  While Nightwing and Starfire deal with their relationship starting to dissolve (a relationship which was actually rekindled just last issue), Price’s roommate tries desperately to get someone to swap rooms with him, once again showing us how alienated he is and making him a primary suspect to be Red X.  After Nightwing encounters his former identity in a stairwell, the instructors call a student assembly, while the opening sequence picks up slightly after it left off with the sudden appearance of Peacemaker and the Suicide Squad!

JUST TOO MUCH OF EVERYTHING

Teen Titans Academy #2 really wants to build on years of Teen Titans continuity and give us the whole Hogwarts experience with capes and recognizable characters, but there’s no focal point for any of it.  Nightwing is already angsting about spending time away from Bludhaven, while the only student suspect for Red X is so obvious that it almost can’t be the right answer.  There’s an awkward reference to Superboy/Conner Kent wedged in here to remind us that he was once a Titan, serving as foreshadowing for his last page appearance under the command of Amanda Waller, too, but not only is the story being referenced nearly 20 years old, it’s two universal resets ago.  Most of the new kids don’t get so much as a quick line in these pages, while Beast Boy and Raven barely do any better.  It just has too many characters.  On the art side, things are a bit better, but Sandoval and Terragona manage to make some things work, but all the designs feel weirdly slick and shiny, and Red X’s cape is Todd McFarlane impossible throughout the issue.

BOTTOM LINE: #2 IS TOO SOON TO START DECONSTRUCTING

Often times, a new series will come front-loaded with as much story as possible to make sure it all gets in, and Teen Titans Academy #2 shows the downside of that approach, never quite giving any of its plot points enough room to develop, much less get a reader’s attention in a meaningful way, with art that’s just a little bit better than okay, making for a disappointing 2 out of 5 stars overall.  I’m hoping that the Suicide Squad crossover helps rather than harms this title, but I can’t see how another half-dozen characters is going to make things less complicated.

Too many characters, not enough plot and overly slick art make for a comic book that feels pointless and over-complicated.