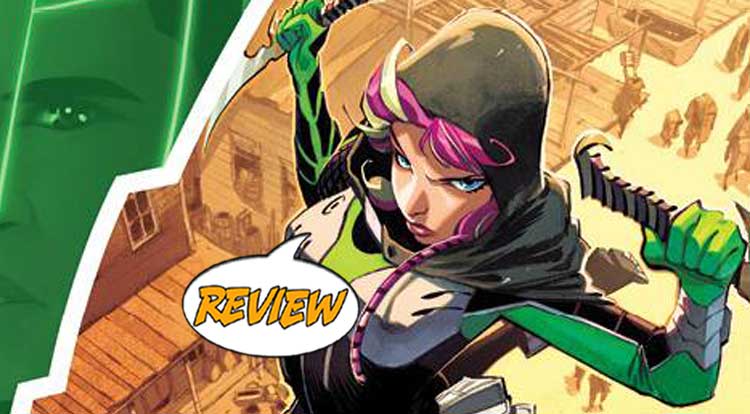 Bad enough having to ally with one villain… but three?  Your Major Spoilers review of Power Rangers #6 from BOOM! Studios awaits! Previously in Power Rangers:  The New Power Rangers have formed an uneasy alliance with Lord Drakkon… but now must trust Astronema and Ecliptor in order to survive.

So, in a nutshell: Jason, Zack and Trini did NOT go to the Peace Conference when they left the Power Rangers.  Instead, they began working for one of the cosmic entities of the universe and were empowered as the Omega Rangers, and have set out on a quest (with former murderer and alternate Tommy Oliver, Lord Drakkon, in tow.)  After crash-landing on another world, the trio was forced to make their way into town and barter for engine parts, only for Zack and Jason to end up captured by the SPD.  Of course, they aren’t the only ones, as Astronema, the erstwhile Princess of Evil is in lockup with them, and her caretaker, Ecliptor has come to Trini and Xi with a deal: Help him break out Astronema, and he’ll make sure that the Rangers escape as well.  Cue the big high-speed train chase, but Astronema isn’t particularly interested in working with Rangers of any stripe, since the Psycho Rangers killed her parents so many years ago.

TONIGHT THERE’S GONNA BE A JAILBREAK

This comic has been pretty well-done since the beginning, but I really enjoy this issue.  Though it’s pretty much a high-speed run to save the Rangers and Astronema, there’s time for reflection from Trini, some dastardly deeds from Drakkon and a lovely look into the mind of the once and future villain-who-eventually-becomes-a-Ranger-herself.  Jason’s worries that he’s not up to leading the team are balanced against her insistence that the heroes are villains, while Ecliptor shows a weirdly honorable side.  As the issue ends, our team is back on the trail again, with some foreshadowing of the greater threat to come, a final-page image that is both distressing and impressive.  The entire issue is visually pleasing, especially Trini’s attack on the high-speed maglev train, complete with her trademark powerful KIAAs (which Eclipstor doesn’t see the point of.)

BOTTOM LINE: A NICE BALANCE OF ACTION AND DIALOGUE

All in all, Power Rangers #6 is an excellent issue of a book that has always been on the high side of good, with some strong character moments balanced with a tense action sequence and really impressive art by Mortarino and Ragazzoni, earning 4 out of 5 stars overall.  If you’re thinking about jumping on now, this issue wouldn’t be a bad place to start, though I’d recommend starting with issue #1 and working your way here.  It’s some good stuff.

A tense issue full of character moments in the middle of combat, giving us spotlights on Trini, Drakkon and Astronma while holding its tension and excitement. Nicely done.