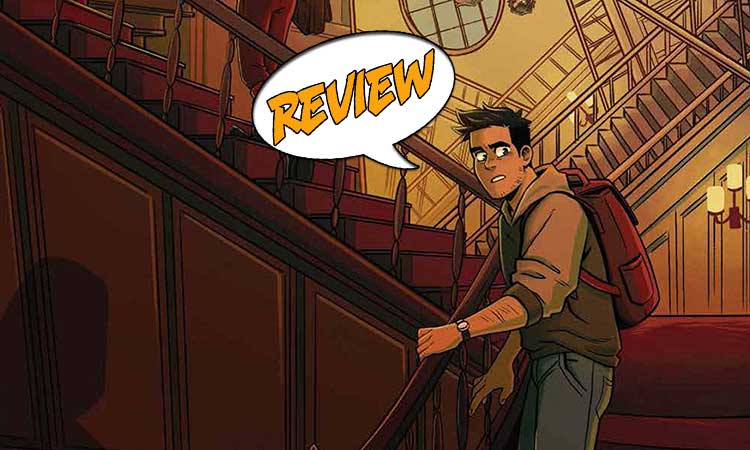 A clue in the town library points to the museum. Is there a connection between the demon and the various ghosts in town? Find out in Specter Inspectors #3 from BOOM! Studios. Previously in Specter Inspectors: Noa and her crew (Astrid, Gus, and Ko) are in Cape Grace to record a new season of their streaming show. This stop – the library. There they can research their other little problem, Astrid’s demon possession. They have also heard that there is a library ghost. Day turns into night; the ghost shows up; they find themselves locked in. The ghost, recognizing the demon, attacks Astrid. Noa stops them and talks to the ghost, Agatha, who tells them that years ago, the Mayor of the town did something that caused the fire at the Town Hall.

A NIGHT IN THE HAUNTED MUSEUM

Specter Inspectors #3 opens at the Museum that was built in the past Mayor’s honor. They’re in luck – the museum director is a fan of shows about ghosts, so they’re allowed to have the run of the place to film, as long as they don’t touch the antiques or go into private areas. They start setting up, and Astrid, the skeptic, gets a weird vibe. Noa checks in with the demon, who claims it is just watching, watching the things that are watching them.

There is a strange groan, then Astrid and Gus both stumble, lose their balance, and fall through the wall. Noa and Ko, who a minute ago were pounding on the door (locked), turn around and find the room upside down. Or they’re on the ceiling. Whatever it is, it’s unnatural.

Astrid/the demon wake up to Gus shaking them. They are stuck in a small bricked up room. Gus doesn’t see any doors in it, but Astrid sees a door and just opens it. It turns out that the demon is familiar with the house the museum is in from a century ago. Some things have been changed over the years, but she sees them as they were while Gus can only see them as they are now.

Noa and Ko are still stuck on the ceiling when there is a rumble and one of the walls heads toward them. They climb up to safety in the arch of a doorway. After a chat about why Ko sticks to this job while he’s afraid of ghosts, they clamber down, only to have their gravity shift again. Ko asks her about the impression she gets from places like this, and wonders if she could sense Astrid now that she’s possessed.

Astrid and Gus decide to explore and look for clues. As long as they’re alone, Gus asks her why she keeps teasing Noa, by which he means flirting with her. The demon confesses that she’s serious, and Astrid admits she’s been pining for her. For six years. But she hasn’t really said anything yet. Gus calls her an idiot and suggests she just talk to Noa. They go into an office full of bookshelves and a fancy desk and compare what they see. The desk is in both their timeframes, but it is locked.

A ghost arrives, a residual haunting who doesn’t seem to see them, but he goes over to the desk, fiddles with it, and pulls out a hidden key. After he leaves, Gus checks the secret compartment, finds the key, and pulls out some notebooks and photographs. One thing he finds is a photo that looks different to the two of them.

They hear a distant murmur of voices and decide to investigate. They find a bunch of people in red robes and faceless masks as well as Noa and Ko who are their prisoners! These cultists are convinced that the demon is possessing Noa. They have been trying to rid their town of the demon and now is their chance. While this suits the demon fine, Astrid asserts her control and they stride in to rescue Noa and Ko. After a brief scuffle in the dark, which Ko remembers to film, they run out of the museum to where Gus is waiting in the car. The cultists are in hot pursuit, and Gus (not yet a driver) drives them out of town with some hilarity.

THE SECRET CULT SHOWS ITSELF

I have to admit that the museum in Specter Inspectors #3 does not look very museum-like to me. It is a huge, rambling old house with tall ceilings, fireplaces and lots of woodwork. It just doesn’t have much in the way of furnishings or displays. The fact that it is a museum doesn’t even play into the plot, considering that a secret compartment in a desk can happen anywhere. On the other hand, it makes the whole gravity reversal event more clear. That’s an ambitious manifestation to choose, and for me it seems way over the top, like more than we might expect from ghosts.

On the other hand, I really like when Gus and Astrid are isolated. The unconscious Astrid has a dream involving fire, and someone walking out of the flames. When she comes to, they are clearly in a small, brick room with no way out. When Astrid sees the door and opens it, we see it for the first time, and Gus’s reaction is utter shock and the fear that he’s losing his mind. Their different viewpoints come back again deftly, and I like this as an interesting way to make progress with their investigation.

Specter Inspectors #3 does not have quite the punch of the previous issues. I do like some of the ways it moves the plot along and how it sets up the demon as a somewhat sympathetic character.

67%
67%
Does Not Have The Punch of the Previous Issues

Another haunted building, another clue, and another town secret!