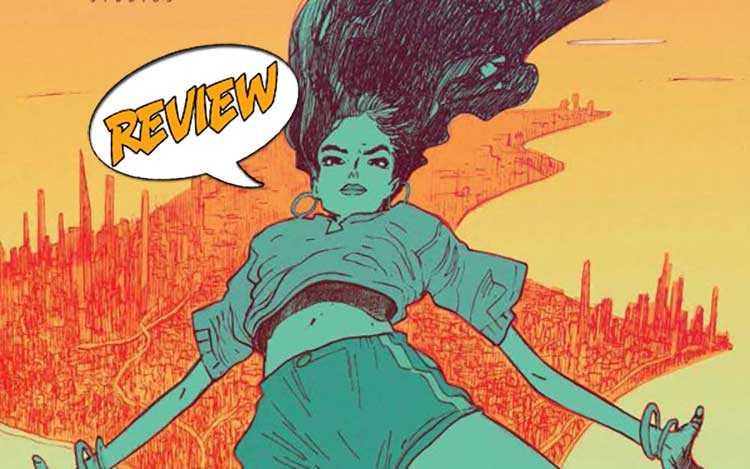 The Many Deaths of Laila Starr #1 Review

THE MANY DEATHS OF LAILA STARR #1

Previously in The Many Deaths of Laila Starr: People were born, lived their lives, and died. This had been the way of things for thousands of years. But that is all about to change…

A LIFE, AND A DEATH, AND A CHANGE IN CAREER

The Many Deaths of Laila Starr #1 opens sets the scene in Mumbai with a couple stories that seem like they could not possibly converge. A woman in traffic (Mrs. Shah) screams at her driver, because she is pregnant, and the baby is imminent. A media studies class has their final party, and there is a line here that is wonderfully prescient. “It was, for all of them, a moment of precarious balance before life plummeted into the unknown.”

And then we cut away to realm of the gods, a modern and very corporate realm. We see Death as she sticks her hand in the elevator door to delay it so she can catch it. She is being called to the top floor and is nervous. As well she should be. Agni directs her in to her boss, the Three-Headed God, who starts in with the small talk. I love this. We’ve got gods here, and Death is getting the “you’re fired” conversation. It’s nothing personal, of course. (It never is, is it?) But very soon, a child is going to be born who shall bring eternal life. If there’s eternal life, is there any need for Death? Hence, her downsizing. Her severance package even includes a human body and life as a mortal.

The pawns have all deftly been maneuvered into place. A girl at the party, who was sitting in the window, falls several stories to the ground. Mrs. Shah gives birth to her baby – THE baby. And Death talks to Agni and finagles a body in close proximity to that baby. The girl who fell from the party is rushed to the hospital but is declared dead. Twenty minutes later, Death arrives in her body. A small ghost sees her and comments and is surprised when Death can see her. People generally can’t. This ghost, Munmun, is charming and helpful. She points Death to the name band she has around her wrist. Laila Starr is now her name. She also warns her that when people come to remove her body and find her to be alive, they probably won’t take it well. She is also curious about why Death is here and what she’s going to do. Death tells her about the baby and Munmun retorts that she is terrible. Their conversation is delightful.

They find the baby Death is looking for, and Munmun tells her his name is Darius. Death, who has destroyed millions, picks him up, looks at him, and realizes she cannot kill him. The hospital staff, looking for the missing body, find her with the baby and come after her. She does put the baby down, but she runs through the hospital with her unfamiliar human body with all its quirks and shortcomings, finds her way out of the hospital…and dies.

But that isn’t the end. That’s only two deaths for Laila Starr. She wakes up again, eight years later.

THE GIRL WHO DIED AND LIVED AND DIED AGAIN

The art of The Many Deaths of Laila Starr #1 is captivating. There is so much to love about it. I like the way the characters are drawn. They are not merely expressive, their emotions are a touch over the top which lends to some sly humor. Layer that with some wonderful color palettes ranging from peachy pastels to rich violets. These capture the heat of Mumbai, the immortal heights of the gods, and the spookiness of the hospital morgue.

This is a story that is rich in symbolism. I am not familiar with Hindu gods, but I have to surmise that their presentation is a mix of traditional elements juxtaposed with the modern business setting. It is downright fun to see Death go from businesslike to incensed, gesticulating with all her six arms, which allows her a lot of scope for trying to get her point across. When she is reborn as Laila Starr, her body is fully human. The face may be different, but even in the few pages we’ve seen of her, we can tell who is wearing that body now.

The Many Deaths of Laila Starr #1 wastes no time in setting up the premise and galloping off after it. Every scene has been carefully crafted to tell us just exactly what we need to know in a clear, crisp style that does not shy away from the humor. I don’t feel as though I have heard this story before, and it leaves me eager to find out what happens next.

The Many Deaths of Laila Starr #1

With eternal life just around the corner, Death is downsized and not happy about it.