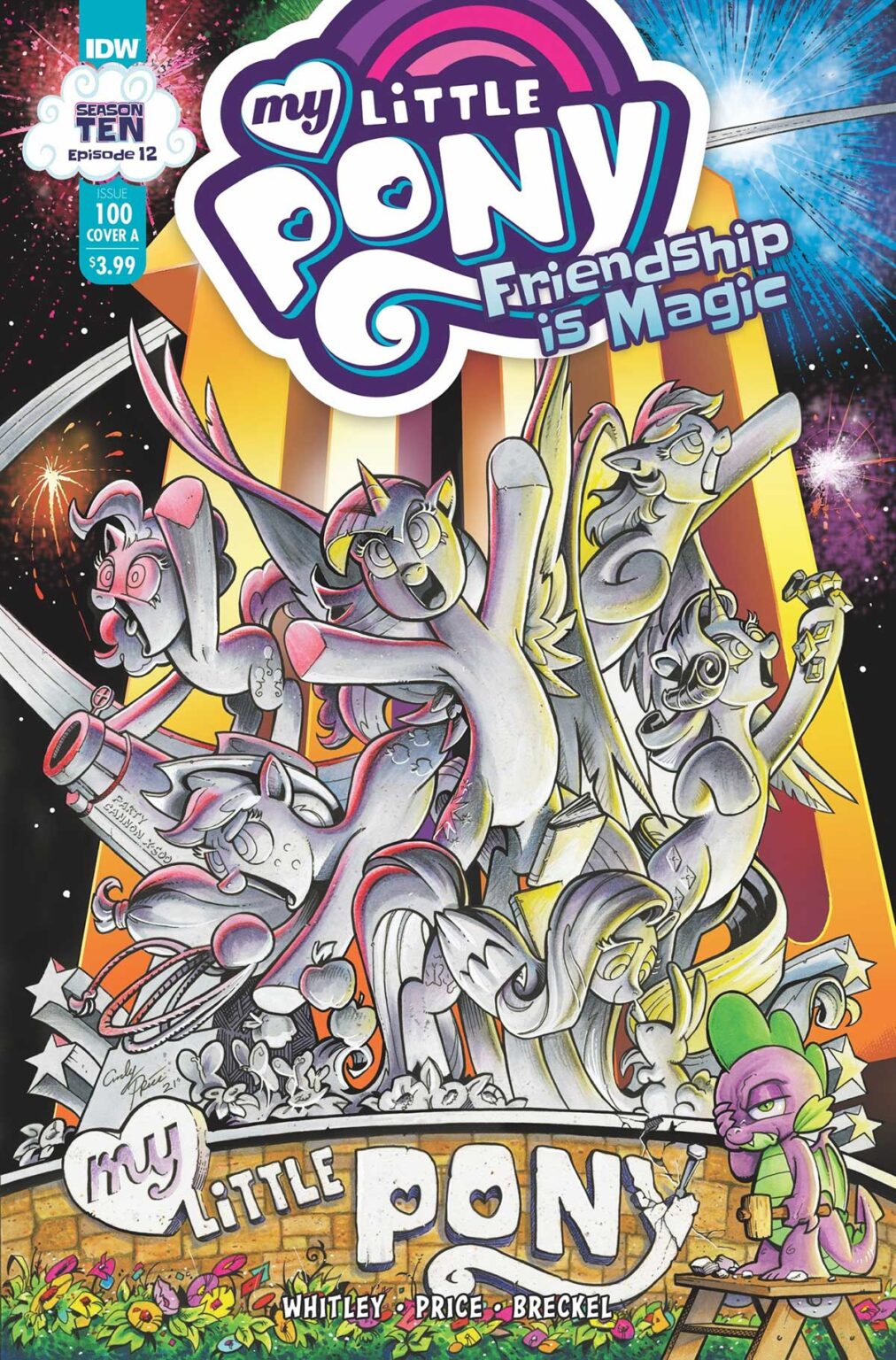 This July, IDW invites readers of all ages to enjoy a centennial celebration with My Little Pony: Friendship is Magic #100, the sensational super-sized anniversary issue full of frolicking fillies and mysterious menace! The monumental 100th issue of Friendship is Magic features the work of longtime, fan-favorite contributors, writer Jeremy Whitley and artists Andy Price and Brenda Hickey, and includes a special back-up story by Katie Cook. Set officially within the Season 10 continuity following the series finale of the My Little Pony: Friendship is Magic animated series, the story will be a thrill for longtime fans while remaining accessible to new and returning readers.

In this landmark issue, Rainbow Dash and her companions Spitfire, Celaeno, Lyra, and Bon Bon find themselves in the Bird Kingdom, where old friendships are tested and a new, enigmatic enemy lurks in the shadows. Together, the ponies will unravel the mystery of the Knights of Harmony!

“In modern comics, it’s rare for any comic to have a run of 100 consecutive issues and it’s even more exceptional for a licensed all-ages comic. It really speaks to the love and dedication of the MY LITTLE PONY fanbase,” says Whitley.

“A decade of MY LITTLE PONY stories, ranging from comedy to action to thrills, has truly allowed me to stretch out my artistic abilities. I’m humbled that our book has introduced so many new readers to the world of comics. I’m honored to have been with the ponies for the entire creative journey here,” says Price.

“Seeing the world of MY LITTLE PONY continue to expand through the comics, picking up where the show ended, is very exciting,” says Hickey. “There are still so many unexplored facets of the world of Equestria and beyond, the worldbuilding continues to have massive potential, and the artists are breathing incredible life into these news lands and characters!”

“Working on the MY LITTLE PONY comics has been one of the highlights of my career,” says Cook. “Fun characters, an amazing world to let them play in, and a chance to finally use every horse pun that I could think of!”

“We can’t thank fans enough for staying with the series through 100 issues, and the wonderful creators — both on #100 and beyond — who have repeatedly brought the world of MY LITTLE PONY to life in amazing and fun ways! And, of course, we couldn’t have achieved this incredible milestone without the unwavering support of Hasbro,” says editor Megan Brown.

My Little Pony: Friendship is Magic #100 will be available with multiple cover variants for retailers and fans to enjoy, including Cover A by Andy Price, Cover B by Tony Fleecs, a Retailer Incentive edition featuring art by Agnes Garbowska, and a San Diego Comic-Con variant by Amy Mebberson available exclusively online timed with Comic-Con@Home.