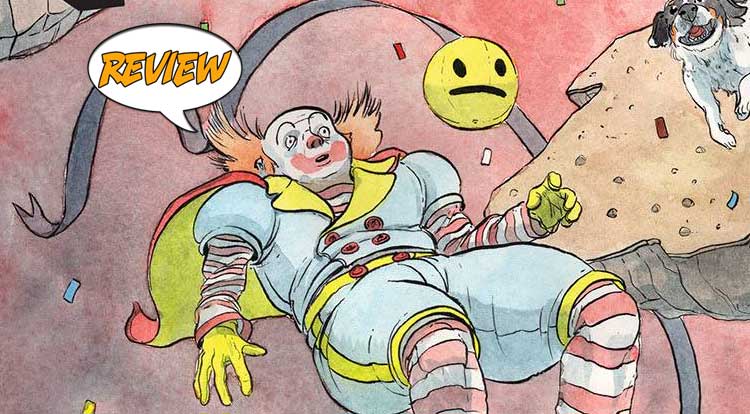 A wise clown once said: Everything floats.  Your Major Spoilers review of Haha #4 from Image Comics awaits!

Previously in Haha: A wise clown once said that everything floats…

…and he was right.

GUSTAV IN THE WORLD OF FLOATING OBJECTS

Haha #4 begins in a strange red void, as Gustav, a not-so-successful part clown, finds himself suspended in mid-air.  As he wonders how and why, the story returns to Chris, a young boy celebrating his 10th birthday, who witnessed the clown shrinking down and disappearing into his own helium balloon.  The story then swaps back and forth, as Chris deals with his surly grandfather, who has never been the same since his wife died, and Gustav comes to terms with his own mortality and his place in the universe.  Things get metaphysical for the lost clown, while Chris and Pawpaw find a very mundane common ground as they play together with one of the boy’s birthday presents: A kite.

Both stories end on a very touching note.

This is a beautiful issue of comics, thanks to Horvath’s art, which manages to be down-to-Earth at the same time that it embodies a child-like clown’s imagination.  As Gustav floats through the canyons of the World of Floating Objects, the art reminds me of a child’s storybook, with soft pastels and delicate linework combining in pleasant ways.  Prince’s story even references the movie ‘UP’, a film whose tone has a lot in common with this issue, without bursting the gentle bubble of imagination and surrealism.  As someone mostly familiar with Prince’s harder-edged series, ‘Ice Cream Man’, I was surprised at the wholesome sweetness at the core of this story, as Gustav realizes that he may be a former drunk with few prospects, but he’s not a dead loss.  There are a few moments of horror to be had, but the overall tone here is gentle, uplifting and hopeful, and I’m here for it.

BOTTOM LINE: TOUCHING AND UNCANNY ALL AT ONCE

Haha #4 is quite wonderful in story, coloring and art, and features two tales that left me smiling, if a little bit wistful, earning 4 out of 5 stars overall.  It’s hard to do successful suspense and horror, but the kind of earnest positivity in this issue is even harder to pull off, and these creators deserve kudos for making it all work.

If you're only familiar with Prince's mean-spirited work on 'Ice Cream Man,' you may be surprised how sweet and uplifting this issue is.