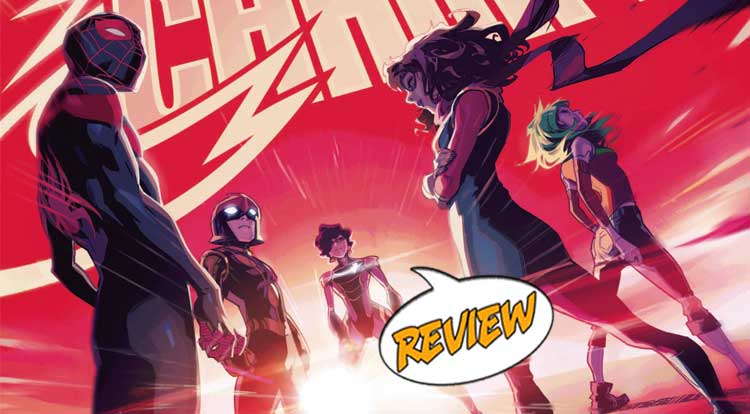 You can punch a villain.  You can destroy a giant robot.  But how can you fight a social media phenomenon?  Your Major Spoilers review of Champions #6 from Marvel Comics awaits!

Previously in Champions:  The Champions tried fighting fair. Now it’s time to fight dirty.  A sinister corporation is cheating the system to try to keep Kamala’s Law on the books, so the Champions infiltrate the company to take it down from the inside.  But the company’s wildly popular app is already turning public perception against teen super heroes.  Can the Champions wage war on a trend?  And how dirty will their hands get before it’s over?

After exposing the Roxxon Corporation’s manipulations to get Kamala’s Law passed, The Champions have been freed of government captivity, but things aren’t quite back to normal yet.  Unless and until the law is repealed, their operations are still against the law, which leaves them out in the cold, and leads to an embarrassing moment for the team.  When they bust up a bank robbery, they find that it was actually a test of security by the bank itself, leading Ironheart to angrily fly off in a huff.  It’s hard to blame her, either, as the team blamed her for ratting them out to C.R.A.D.L.E., when it was in fact Viv Vision.  The Champions then discover that Roxxon has refocused their anti-teen-superhero efforts on a new social media app, Roxx On!, which is suddenly everywhere.  But as Ms. Marvel points out, the corporation has brought the fight to them on their own grounds: The Internet.

On the one hand, it’s good that the team is no longer constantly dogged by agents of C.R.A.D.L.E., but this plot line is still in play, and Roxxon’s attempts to appeal to (and co-opt) youth culture feel very much like they’re written by people well over 18.  That makes for more than one moment that feels awkward throughout the issue, as the whole Roxx On! teen-driven vibe feels very forced. What doesn’t feel forced is Vecchio’s lively art, giving us a lithe and insectoid Spider-Man, a wonderfully stretchy Ms. Marvel and the best Ironheart we’ve seen in a while.  The coloring also adds to the lively vibe, with lots of focus on bright reds and pinks, and some cool new designs for the villain team.

I’m disappointed to find the Kamala’s Law plot with us, entering it’s third year, but Champions #6 features a nice balance of action and interpersonal tension, with strong art and coloring that helps to overcome some of the rougher spots in the narrative, earning 3.5 out of 5 stars overall.  If nothing else, it’s nice to see characters like Snowguard still in these pages, as well as an interesting core lineup of heroes.

Several moments in this issue feel a bit "Hello, Fellow Kids!" for my taste, but it's a good-looking comic book nonetheless.