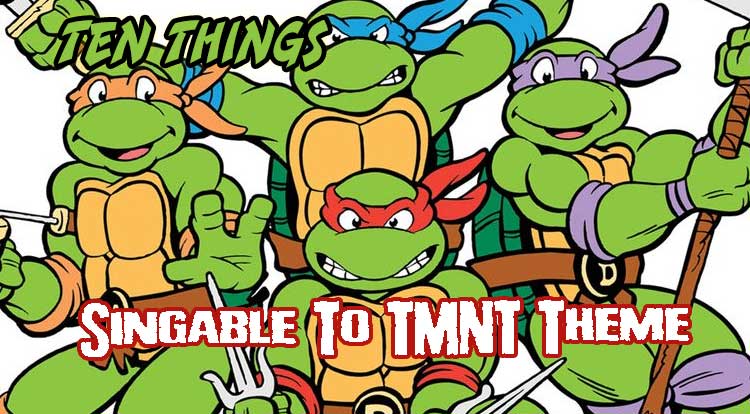 I’d like to apologize in advance for putting the earworm in your head with today’s Ten Things collection. Welcome to Ten Things: Ten Supers Singable To The ‘Teenage Mutant Ninja Turtles’ Theme Song!

Whooshman-Bicarbonate Films, in conjunction with An Amateur Comics Historian and Splinter, who taught them to be ninja teens, Presents: Rocking the classical “backwards word” alias, El Carim (real name unknown, but it spells “miracle” in reverse) hails from the Mandrake school of magician/super/detective. After being visited by the living source of all magic, who is sadly named Wizzar, our Master of Magic plied his trade for about a dozen issues, assisting a boy magician in his final appearance. In the ultimate Golden Age diss, said boy magician took El Carim’s slot in Master Comics in the next issue, leaving him to hang out in limbo with Zoro the Mystery Man and Yarko The Great. The heroes of Big Bang Comics are tributes to superheroes past, but seldom is one as complex as The Badge. Initially a pastiche of Simon & Kirby’s Guardian, Roger Ryan was empowered by a secret formula with greater-than-human speed, strength and agility. During WWII, he changed his outfit and nom de guerre to something more patriotic, resembling Captain America, who shares the same creators. After the war, he was seemingly killed, but his sidekicks formed a secret agency known as B.A.D.G.E. (the Bureau for Advanced Defense and Global Espionage) to continue punching evil in his honor.

Of course, nobody really dies in comics, and so Roger/The Badge was in fact not dead, but thrown into the parallel reality of Earth-B, where he took up his shield once more, allowing him to be the Golden Age Badge in both primary Big Bang realities.

8) ROBO OF THE LITTLE PEOPLE Created by a race of tiny humans that live in a hidden part of Antarctica (kept warm by ambient volcanic heat), Robo is essentially a giant robot, albeit one who is coincidentally the size of a regular human. After an encounter with human explorers, Robo returns with them to New York City, where he wanders about punching crime and also a bear at the Central Park Zoo.

He made only four appearances circa 1940, during the wild west days where any comic premise, no matter how bizarre, could get page space somewhere. A rich idiot with no day job, Rod Hathaway comes from the year 2255, where man is still alive, fighting crime throughout the space ways on a lark. Rather than the usual three-piece suit and hat, Rod has an armored space-suit and a frapgun, as well as future gadgets that help him unravel mysteries and punch evil… IN SPACE! Calling himself Avenger to protect his identity, but making no attempt to hide his face, Rod was assisted by Teena, whose super-power is “being drawn by Wally Wood” and rocking Britney Spears exposed midriff and low-rise pants half a century early. Appearing in the pages of Filipino title Speed Komiks circa 1986, Sankarsan combines Star Wars with Hindu legend, applies a little of the old ultra-violence, and lightly tosses the mixture until coated in sauce. In the year 2535, where woman can survive, a ship crashes to Earth and the dying pilot bequeaths his droid and Jedi accoutrements to our man Sankarsan. When a villain kidnaps his mother, he sets out to save her, only to find that she’s been captured by Emperor Hiranyaksa… WHO IS HIS FATHER!

That reveal may be a bit blunted by knowledge of the source material, but the beautifully-drawn final battle goes entirely cosmic and seems to end with Sankarsan blowing up a PLANET with his Jedi powers, so that’s fun.

5) JERRY MATHERS AS ‘THE CLEAVER’ A member of the Uh-Oh Squad and colleague of Ambush Bug, The Cleaver (whose name may or may not actually be Jerry Mathers) seems to be Japanese, following the way of the samurai. Like the rest of his teammates (massive clown Blotto and Ms. Mohawk), he was killed in a tragic accident when the Bug came back from Hell this one time.

I’m pretty sure that’s not actually Japanese in his word balloon. Appearing once circa 1943, Mister Zero tried kill himself at the beginning of his only adventure. He was saved from his own bad impulses by a Professor Baffling, who not only fixes up his wounds, but performs a free bonus brain surgery, giving him the powers of telepathy, clairvoyance and precognition. Dubbing himself Mister Zero, this unnamed man punches Nazis and then disappears into the mists of comics’ prehistory. Finding information on him is extra-maddening, as Street & Smith Publications comics aren’t considered public domain, for complicated reasons I don’t entirely understand. After facing a villain empowered by the cybernetic Extremis virus, Tony Stark was desperate, and injected himself with the same virus to get an edge. This allowed him to directly control and manipulate his armor with the power of thought, avoiding the manual controls or AI assistants of previous versions of the suit. He wore this unit for some time, until the Skrulls invaded and infected him with an alien virus that kept him from controlling it, eventually forcing him to purge the Extremis from his body. It bears a resemblance to one of the armors worn during ‘Iron Man 2’ by Robert Downey Jr. Created when the Goggle Jet, Goggle Tank and Goggle Dump are combined, Goggle Robo is only the fourth Super Sentai giant robot, piloted by three Sentai Rangers at once. Remarkably versatile and agile, Goggle Robo has a sword, shield, bladed gauntlet and multiple attack forms depending on the opponent being fought. Goggle V is early enough that the team still has a flying carrier ship to accompany their robot, piloted by Goggle Black and Goggle Pink, which explains why only three of the five team members pilot Goggle Robo. Let’s say Goggle one more time and see if it stops looking like a real word! GOGGLE! Created in the 1980s as a regrettably camp gay character who was nonetheless a pioneer, Gregorio was a member of the New Guardians, a team that spun out of ‘Millennium.’ Empowered with magical abilities and telepathy (though he had minor sorcerous abilities even before being chosen), he stayed with his team throughout their short history, even after being confirmed as HIV-positive. Retiring to Peru and marrying the hero called Tasmanian Devil, Gregorio kept studying the occult, and has served as a member of the Justice Foundation, as well as providing magical support for those who remember him. In short, he’s a stone-cold retired badass, raising his daughter and hanging out with his husband and honestly, it’s much better than the usual way of dealing with characters out of the spotlight, which is to say “murdering them.”

This week’s topic, Ten Supers Singable To The ‘Teenage Mutant Ninja Turtles’ Theme Song. is all me, obviously. But feel free to follow along @MightyKingCobra for more Ten Things madness on Twitter or check out the full Twitter archive here! As with any set of like items, these aren’t meant to be hard and fast or absolutely complete, if only because eight-syllables isn’t actually that hard to pull off. Either way, the comments section is Below for just such an emergency, but, as always: Please, no wagering!