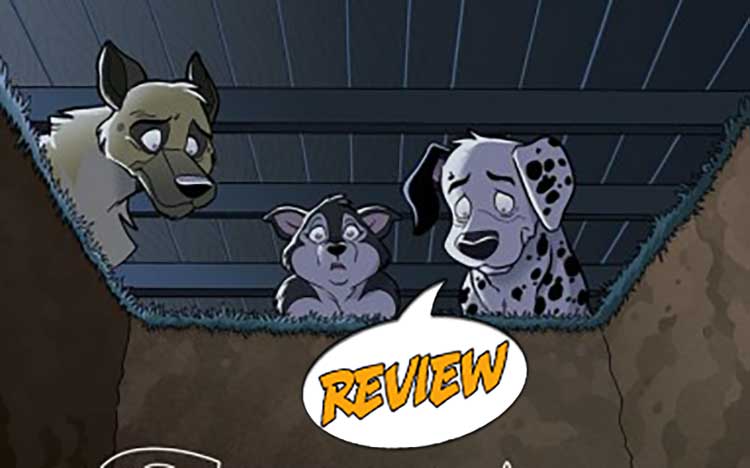 A second dog, Roxanne, remembers the murder of her Lady. And something around the house smells a bit off. What will the Dogs uncover now? Find out in Stray Dogs #3 from Image Comics! Previously in Stray Dogs: Rusty is the only dog who believes Sophie remembers something about her Lady. When the Master takes Aldo for a ride, Rusty and Sophie go to the Private Room and find the door unlocked. The room is full of all sorts of human junk, such as tools, photographs, rope, and women’s clothes. The Master comes home early and finds Rusty in the room and kicks him out, inadvertently locking Sophie in for a time. She hears him practicing introducing Earl to someone. Rusty gets locked in the shed for “Punishment.” When he gets out, he asks Aldo what they did, and he reports going to the dog park with the Master where they met a lady and a dog, and then later they stopped, and the Master took pictures. Sophie shows the dogs a picture she found in the Private Room. Roxanne recognizes it as her Lady!

THE MAN WHOSE FACE WE DO NOT SEE

Stray Dogs #3 opens with Roxanne, Sophie, and Rusty talking. Sophie tells her there were other pictures, of other ladies. She wants to get more of the pictures out to show the other dogs. Rusty is more cautious. As he puts it, the Master has a room full of junk and he takes pictures. They have no proof he killed anyone. But Roxanne now remembers living with her Lady, until the day the Master killed her and she forgot about her completely, until now. Earl overhears and insists that she forgot because it never actually happened.

Evening falls and the Master arrives home. When the dogs race inside, Roxanne smells something and starts digging near the house. A shovel tips over and reveals a small door leading under the porch. The three main dogs crawl in to investigate, and Victor, the Dalmatian, gets curious and joins them. There are three mounds of dirt, and Roxanne starts digging. Before long, the Master looks in with a flashlight. The dogs hide in a suspiciously grave-like hole. I’m starting to feel terrified for these dogs. The Master doesn’t see them, but he closes the door and props the shovel in front of it again.

The four dogs are trapped – and it’s dinner time. If they don’t show up to eat, he will come looking for them, and what if he finds them? Thanks to Roxanne’s powerful digging, they get loose and scoot into the house covered in dirt, but just in time. The other dogs are perturbed. But Roxanne also found a scrap of fabric. This time, Victor remembers something.

Victor has quite a back story. He was rescued from a house fire and adopted by a woman firefighter. It’s a happy life until the night he is tied up just out of reach and sees his Lady being killed. After this memory hits, he tells the other dogs they need to get out right away; it’s an emergency. And he says he knows what to do. This is a little bit of a stretch, but it fits with his story. He knows about the emergency button on the phone, and that you’re supposed to touch that and people talk to you and will help.

There is some doggy discussion about this. The big problem – they can’t get people to understand them. It’s also clear that Victor doesn’t quite understand how the emergency button actually works. But they try anyway, knocking the receiver off, pushing the button, and barking desperately, right up until the Master (who was alerted by Earl) shows up. He apologizes to the dispatcher – and takes Victor out to the shed.

I am surprised at how much of a nail-biter Stray Dogs #3 is.  It flows effortlessly back and forth between the normal life of dogs who are well-cared for, and the horror of what they’re starting to discover. This issue opens at sunset with a beautiful long shot of the dogs all just hanging out in a perfect doggy play-yard in the country. As night falls and the Master arrives home, most of the dogs race indoors with enthusiasm. But when Roxanne smells something and we see the shovel propped up against the porch, dread suddenly hits home. Then, when we see the graves, every page turn is about, “What are they going to find now?”

The books is for readers age 15+, and so far we have seen only hints of violence. This does not detract at all from the horror. While we don’t see buckets of blood and random body parts, the dogs’ fleeting memories show us just enough that a little imagination takes over. Add that to the moderate anthropomorphism in the dogs’ facial expressions and it makes us feel privy to the events in the story – privy to them, but as helpless as the dogs when it comes to doing something about them.

BOTTOM LINE: COMPLEX IN ITS SIMPLICITY

Stray Dogs #3 is everything you want in a horror story. I may be biased, having lived with dogs my entire life, but these dogs are great sympathetic characters who struggle between not wanting to bite the hand that feeds them, and wanting to communicate their fears to a human world that does not understand them.

As the Dogs search more, they start finding more things that trigger memories – memories of murder!