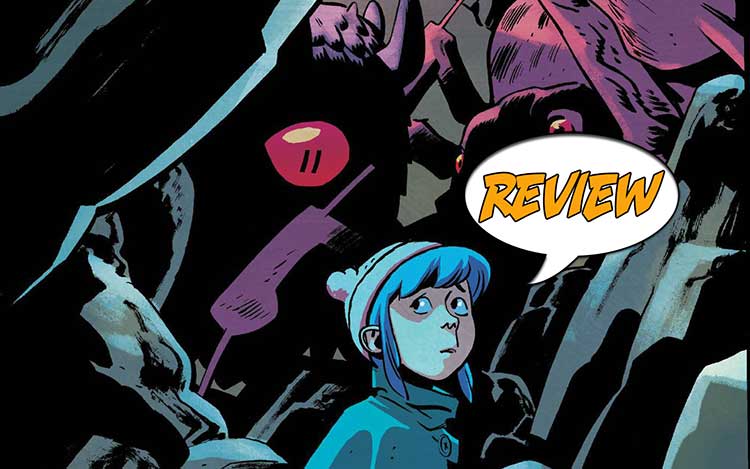 Jonna and the Unpossible Monsters #2 Review

Following the first lead she has had in ages, Rainbow investigates. When she comes face to face with a couple monsters, how will she survive? Find out in Jonna and the Unpossible Monsters #2 from Oni Press!

JONNA AND THE UNPOSSIBLE MONSTERS #2

Previously in Jonna and the Unpossible Monsters: Rainbow and her wild little sister Jonna lived in a lush, green world until one day when the monsters arrive – and Jonna goes missing. Now, a year later, the world is dry and dying. Rainbow searches for her sister, but so far no one has seen her. Until one day when a boy brings her word that a passing traveler said he saw a kid jumping through the trees. Could it be Jonna?

As Jonna and the Unpossible Monsters #2 opens, Rainbow walks through the desolate countryside full of rocks and enormous thorny red vines. Enormous bones litter the landscape, and the only creatures around are lizards. Rainbow pulls out the sketch she has, her only picture of Jonna, and she remembers. Jonna was the kind of kid who never walked when she could run. She loved to pretend she was an animal, and she loved to watch animals. She could be silly, and she could be a pest.

Rainbow’s thoughts are interrupted by two enormous monsters fighting over a piece of food. The fight is practically over her head and she cowers, waiting for it to be over. When silence falls, both monsters are dead. Rainbow looks around and catches a glimpse of something leaping through the trees. Is the silhouette familiar? She pulls out her sketch again and finds herself face to face with a feral Jonna who has in her own mouth the food the monsters were fighting over.

Rainbow is overjoyed, but Jonna seems not to recognize her. She runs off, growling. Rainbow talks to her, telling her they’re sisters, reminding her that dad brought her home. So this is interesting – maybe the reason Jonna seems different is that she always was. There are more flashbacks of the two girls with their dad, sometimes getting along and sometimes not (as families do). And there is a hint that perhaps Jonna remembers.

Jonna and the Unpossible Monsters #2 is a story told far more in the art than in the words, and the art is up to the task. I really love the lengthy montage of Rainbow’s memories of Jonna. They’re from a happier time and place and they look for all the world like an older sister who is indulgently amused by the antics of her younger sibling. I love the panel of Jonna swimming, holding her breath and eagerly looking at the fish. This is a time when kids could enjoy being themselves, when they didn’t have to spend time scavenging to stay alive.

In the monster fight that leads to Ranbow’s and Jonna’s reunion, the backgrounds look more dry and the shadows are starkly intense. The monsters are wonderfully weird, with one resembling a giant bug or spider, while the other is some sort of spiky, one-eyed beast. Then the lettering steps up as the fight begins in earnest. What we see is Rainbow’s various reactions as she hears loud sounds of fighting, biting, and who knows what all else. When it suddenly falls silent, it is as though we can hear the change while in the background, there is only the subtle visual clue that something has leaped through the background.

BOTTOM LINE: WILL IT BE A REUNION?

Jonna and the Unpossible Monsters #2 is an entertaining read that would be good for somewhat younger readers while still having enough story to be interesting for older ones.

Jonna and the Unpossible Monsters #2