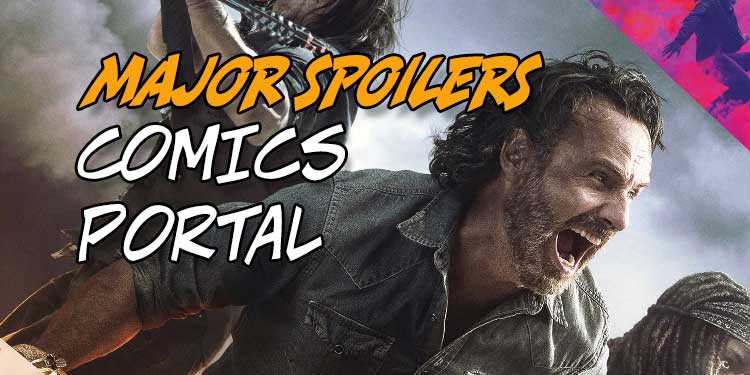 If you’re going to buy Image Comics’ The Art of AMC’s The Walking Dead Universe, I hope you enjoy it! Sadly, that doesn’t include me!

‘THE ART OF AMC’S THE WALKING DEAD UNIVERSE’ Last week, I talked about why I pick up hardcover versions of stories I like. This week, I will endeavor to explain why I do NOT buy art books. First, however, let me shine a little light on this art book for The Walking Dead Universe.

I’m one of those people who, once they read the “conclusion” to The Walking Dead comic, I lost interest in the AMC TV show. It’s tough for me, when I know where we’re headed, to watch a show likely to go in the same direction.

Although my roommate is big on Mr. Kirkman’s Invincible and he wants to watch the new adult animated series, I’m not as sold on it as he is. For instance, I see the main character dating a girl he’s NOT going to end up with, and I’m checking my iPhone for any new messages.

So, I say to all you Kirkman-ites out there, enjoy, enjoy! For me, however, that ship has sailed.

And that includes this art book.

PRETTY PICTURES AREN’T ENOUGH FOR ME I can sum up in one sentence why I pass on art books: I’m a story guy.

Granted, I’ve interviewed many artists on my weekly podcast, so I’ve learned the importance of art when it comes to storytelling. It’s what initially grabs the attention of the potential fan. It has to “sell” the person on buying the book. To keep that person buying the comic, though, it needs a good story.

That’s where I come in.

I mean, I have some artists that I LOVE seeing their work. I count myself extremely fortunate, for instance, that I’ve had the chance to buy and read comics with George Perez’s artwork. I cherish every panel of it.

But I struggled to get through Gerry Conway’s writing in those Justice League comics he scripted. Even Mr. Perez’s high-octane art couldn’t keep me picking up the tales that always ended with the heroes finding “the strength within themselves” in order to save the day.

I once read an article that said how Todd McFarlane wrote a Spider-Man story in his heyday. He would draw several pictures of Spidey, throw them up in the air, and however they landed on the ground, that was the story.

After reading some of his Spider-Man storytelling, I’m glad he moved on to action figures. His stories just didn’t send me. I used to joke that Kraven, who had half of his head blown off one time, would write his plots.

A POSTER IS A POSTER I’ve talked with artists who have pointed out that a piece of art should tell an entire tale in itself. It should, in our minds, create a beginning, a middle, and an end—much like a great story. Something about the way it’s crafted makes you mind fill in the gaps.

I often tell people I interview during my podcast that a piece of art could be a poster on my wall. That’s a high compliment from me. Notice I never say that they should be in an art book.

Please don’t misunderstand me—I LOVE some art. I can get lost in some pieces of artwork. But an entire art book just won’t work for me. If each piece of art tells a different story, my brain will get confused. Which story was I just reading? Did that one on the previous page end and this one begin?

Again, I’m a story guy. Yes, I can read several stories in a comic. And I’m okay with pin-ups and such. But, as great as some art and artists are, I’m not going to get an art book! Sorry! That said, let me mention my favorite artists just so you know I’m not anti-artist.

The aforementioned George Perez is at the top of my list. Just gorgeous work!

Next comes Alex Ross. It’s great to see someone who can make superheroes appear to be real. His paintings do that for me. I particularly remember one large-sized book when Superman was carrying a Christmas tree in the city of Metropolis. It was like a photograph to me.

However, I haven’t been buying the recent Marvel comics with his covers on them. They’re nice and all, but again, I need a story! A selfie isn’t as good as a poster!

One of my friends hates Mr. Ross’s art because it looks too real to him! He wants artwork to look like it’s been drawn. The very thing I enjoy about his art makes my friend hate it!

One of the most dynamic artists of all time has been Bruce Timm. His figures imply motion and a story even when they’re standing still! Whenever I see his name on an animated movie, I buy it! The art will sing to me! However, I haven’t bought any of his individual pieces as great as they are! My loss, I’m sure!

Yes, there are some artists I don’t care for, but I prefer to accentuate the positive!

I’m sure I’ll come across others who will sparkle in the years ahead! I’m excited to see just who they will be!

What do you think? Do you buy art books? If so, which artists’ books do you pick up? Do you prefer realistic art to a different style? Which names should I have included in my list? Whatever your opinions, be sure to share your thoughts in the space below!