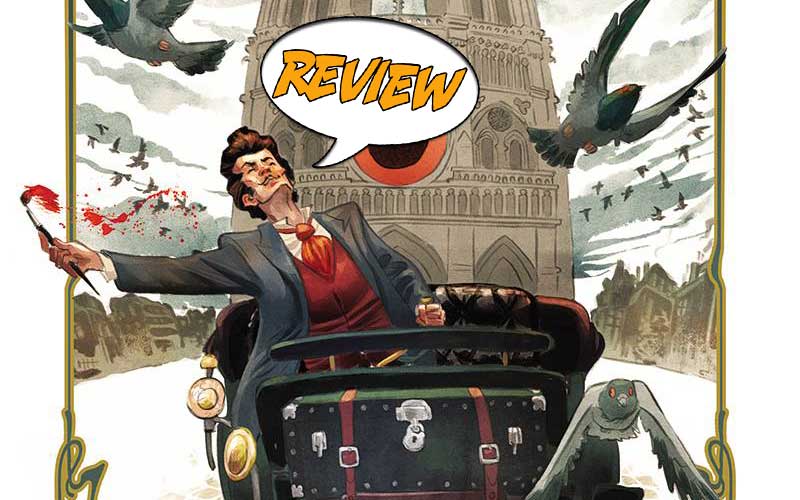 The Picture of Everything Else #3 Review

In The Picture of Everything Else #3 from Vault Comics, Marcel prepares to confront Basil about the murders associated with his paintings.  But is it no surprise that the man who painted Dorian Gray’s portrait is capable of something far, far worse?  Can Paris survive?  Find out in your next mighty Major Spoilers review! THE PICTURE OF EVERYTHING ELSE #3

Previously in The Picture of Everything Else: Marcel and Alphonse are artists and art thieves in fin de siècle Paris.  A series of bizarre deaths indicate something unusual is occurring, and trace it to an English artist, Basil.  It is only when they discover that Basil is the painter of Dorian Gray’s portrait that they realise they have bitten off more than they can choose.

The Picture of Everything Else #3 seems to perfectly encapsulate the guttering embers of the 19th century, an endless autumn at the end of a violent century.  It turns out, in reality and in this issue, that this was but a pause before humanity to a leap into an even darker, more bloody century.

This issue is not only something beautiful to admire, thanks to Kishore Mohan’s artwork, which owes a great deal to the watercolor masters of the era, but in its evocation of the era itself.  With Marcel certain that Basil has been murdering people across Paris for the sake of his art, there are elements of the gothic and romantic shooting through The Picture of Everything Else #3, making it an interesting and entertaining read.

The Picture of Everything Else #3 makes the link back to The Picture of Dorian Gray much more explicit, with references to Oscar Wilde’s unjust imprisonment one of the references to the story and era itself.  That the three main characters are all gay is another link to Wilde, as is the enlargement of the central idea of his story.  Basil is no murderer, as it turns out.  His experiments with his bizarre talent find their ultimate fruition in creating a painted version of Paris that serves as a capsule within which to save the ideal version of Paris.  Basil foretells of the new century being a time of violence and chaos, and that Paris, and the era that he cherishes, deserves to be saved in this unique form.

While there is a philosophical core to The Picture of Everything Else #3 that should be admired – that art for art’s sake should be the only goal of the artist, and that morality has no place when considering art – there are other elements of the story, and Mohan’s artwork that also stand out.  The sequence where Basil retells of his meeting with Dorian Gray, and his horror at what his friend has done with the painting, and then Gray’s attack on Basil, is a disturbing montage of largely black and white images.  Mohan portrays the full horror of the attack, and the addition of red in a cascading torrent as the panels tumble down the page makes the sequence striking and disturbing.

Basil’s plan to capture Paris within a painting, in all its glory and beauty, has strong echoes of The Picture of Dorian Gray.  And while Basil may have the best of intentions, one feels that in a neat inversion of the story, the image of Paris captured in the painting may maintain its pristine outlook, its progenitor may become dirtier, filthier and more vile with the passage of time.

BOTTOM LINE:  ART IS THE WORD

The Picture of Everything Else #3 is a decent next step in the ongoing series, elevated by some of the best art you will see in a title this year.  It perfectly captures the feel of the times, with the hopes and dreams of the characters balanced on a knife-edge by the prospect that the advance of modernism is about to rip everything apart.

The Picture of Everything Else #3

93%
93%
The gothic and romantic are intertwined in this smart, stylish and sexy comic that will chill your blood!

The Picture of Dorian Gray serves as the inspiration of this series and this issue in particular, but The Picture of Everything Else #3 is set on an impossibly larger canvas, with ramifications that will have to wait to be resolved. It is a fine issue, with some remarkable art that makes it well worth purchasing.