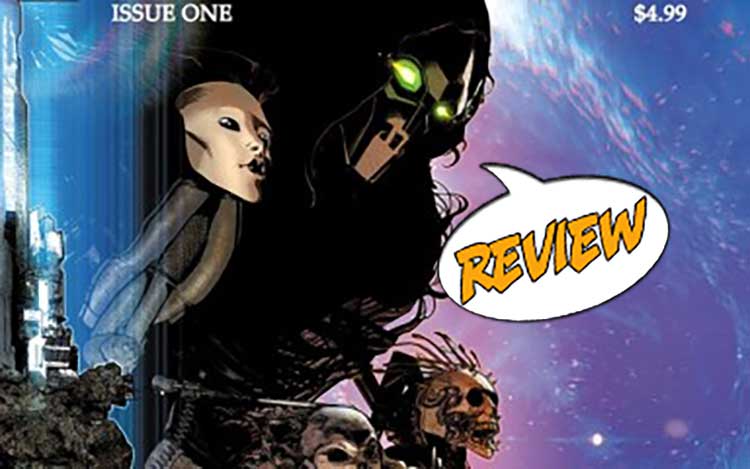 Vasquez has a pretty comfy and easy going job.  That is until pirates appear to take over her outpost.  Your Major Spoilers review of Jules Verne’s Lighthouse #1 from Image Comics, awaits!

Previously in Jules Verne’s Lighthouse: At the edge of the galaxy, there is a giant supercomputer known as the Lighthouse. Three humans, one alien, and a nanny bot have manned the remote station for years in relative peace.

Jules Verne’s Lighthouse #1 opens up with Vasquez, her bodyguard robot Moses, Captain Moritz, Felipe, and the alien Ekk, guiding a ship through a maze of wormholes.  Later, after investigating a strange alarm an unannounced ship appears claiming to have injured crew members.  The captain allows them to dock, but they turn out to be pirates.  They quickly take the crew, except for Vasquez and Moses hostage.  While hiding out, the duo find Captain Moritz’s secret place in the outpost.  There they find his journals which Moses begins to scan and read.  Vasquez knows that in three days another ship is scheduled to arrive.  After hiding for three days and discovering that the captain knows a lot more about her and the rest of the crew than he let on, including some deep hidden secrets, the ship arrives and Vasquez goes to meet it.

One of the most surprising things about Jules Verne’s Lighthouse #1 is how little actually happens for how many pages this comic is. So much of this issue is eaten up with long winded conversations that don’t seem to add to anything at this point in the story as well as pages devoted to dodging around details of Vasquez’s mysterious past. So much of this issue feels devoted to setting up later issues.  This leaves things feeling disjointed and more like just a series of events without much tying them together.  The reimagining of the nautical setting of the original novel is well done though.  There’s enough additions to this to make it feel more realized than simply adding space terms to things and the inclusion of more depth to the characters suggests that there will be more to this than a word for word adaptation.

THE BOTTOM LINE:  FUNCTIONAL, BUT UNINTERESTING

Jules Verne’s Lighthouse #1 has a good setting and shows potential in how it's adapting the original novel. Unfortunately it doesn’t take enough care to craft an interesting story on its own and spends too much time introducing various elements.