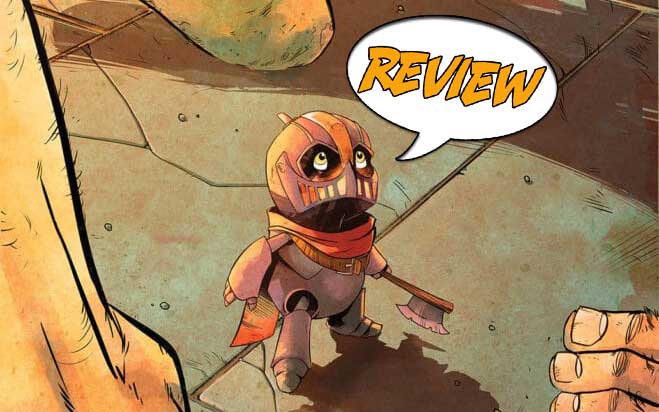 Canto and the City of Giants #1 Review

In his continuing quest against the Shrouded Man, Canto has a new plan that involves the Misturian Witch and the Guardians of Dis. What is he up to? Find out in Canto and the City of Giants #1 from IDW Publishing! CANTO AND THE CITY OF GIANTS #1

Previously in Canto and the City of Giants: Canto is on a quest to save his people’s lives and stop the Shrouded Man. Faced with the choice of keeping his own clockwork heart or giving it up to take the Shrouded Man’s heart and return it to him, he made the difficult choice of giving up his own heart. This means the Shrouded Man can sense him and know what he is up to, and he hopes this will give him a chance to destroy his heart. Canto returns home to New Arcana and rescues Aulaura’s people. But he has a plan, and it involves the Misturian Witch he previously captured…

CANTO FINALLY HAS SOME TIME TO PLAN…

Canto and the City of Giants #1 opens with Canto, Falco, and Rikta driving a prison wagon which holds the Misturian Witch who taunts them, even calling them slavers for keeping her locked up. Considering that Canto’s people were all enslaved until recently, this is pretty obnoxious. But they are on their way to the City of Giants.

As they approach, they find two old friends. The Great Guardians of Dis have had a rough time of it in Canto’s wake, although they do not hold it against him. In the last series, their legs had been lopped off. Now they are buried up to their necks and are being plagued by beetles. Canto and his friends chase the beetles off, and we learn that the giants are named Fra and Ba. They returned home after their punishment (the legs) in Dis, but now their own people no longer consider them to be giants and have put them out here as an example to be looked down on. Very folkloric.

But Canto specifically wanted their help and brought the Witch to build new legs for them. He decides to go into their city to try to get them released. This may not be as easy as he had hoped. Canto makes an elegant request of the King and Queen, and they act like there was some indistinct noise buzzing beneath them. He then insults them about this, and the Queen immediately calls for a guard. After a word with the King, they agree to listen to Canto. He pleads for the release of Fra and Ba. The Queen says they consider them little Giants, which is preposterous. Canto explains that the Misturian Witch can build new legs for them.

But it’s no deal. Until the King whispers to the Queen, and she hears him out. A beast named Ferro attacks their livestock and frightens their children (can you imagine what that would take?). If Canto can bring them Ferro’s horn, they will free Fra and Ba. He agrees immediately.

BUT PLANS CAN CHANGE ON THE FLY

The art of Canto and the City of Giants #1 has a steampunk vibe between Canto and his people and the Misturian Witch, but this doesn’t run through the entire world which I like because it makes the main characters that much more special. As always, because Canto is entirely covered in metal armor, a lot is communicated through his expressive eyes as well as body language. The action pose of Canto and his two friends right before they meet Fra and Ba tells us that they are ready for adventure, even if they do happen to be small.

The City of Giants (called, “Brob,” by the way, which is very clever) is another challenge to composition. The giants are obviously very large, and Canto is smaller than the average human. Color is used to set off Canto and the Witch as they move through town, and I like the touch of them having to climb up a few steps which are inconsequential to the giants. The King and Queen are an interesting pair. Previous arcs have established that Giants are not particularly smart; these two are also self-important. They have pink hair/beard between them, and their crowns are purple crystal, which may have ties to Ferro. Their voices are big, and the lettering comes off as them talking loudly. I like how the giants have such human traits while having giant quirks.

Canto & the City of Giants #1 is a fine jumping on point. It does not take a lot of time to explain back story but gets going right into the story which then takes a hard turn into starting a new quest. Such is the life of a hero!

Canto and the City of Giants #1

Canto goes to the Great Guardians of Dis and finds them having a hard time of it.